Pick of the week: No, the riveting "Zero Dark Thirty" doesn't glorify torture — its real agenda may be darker still 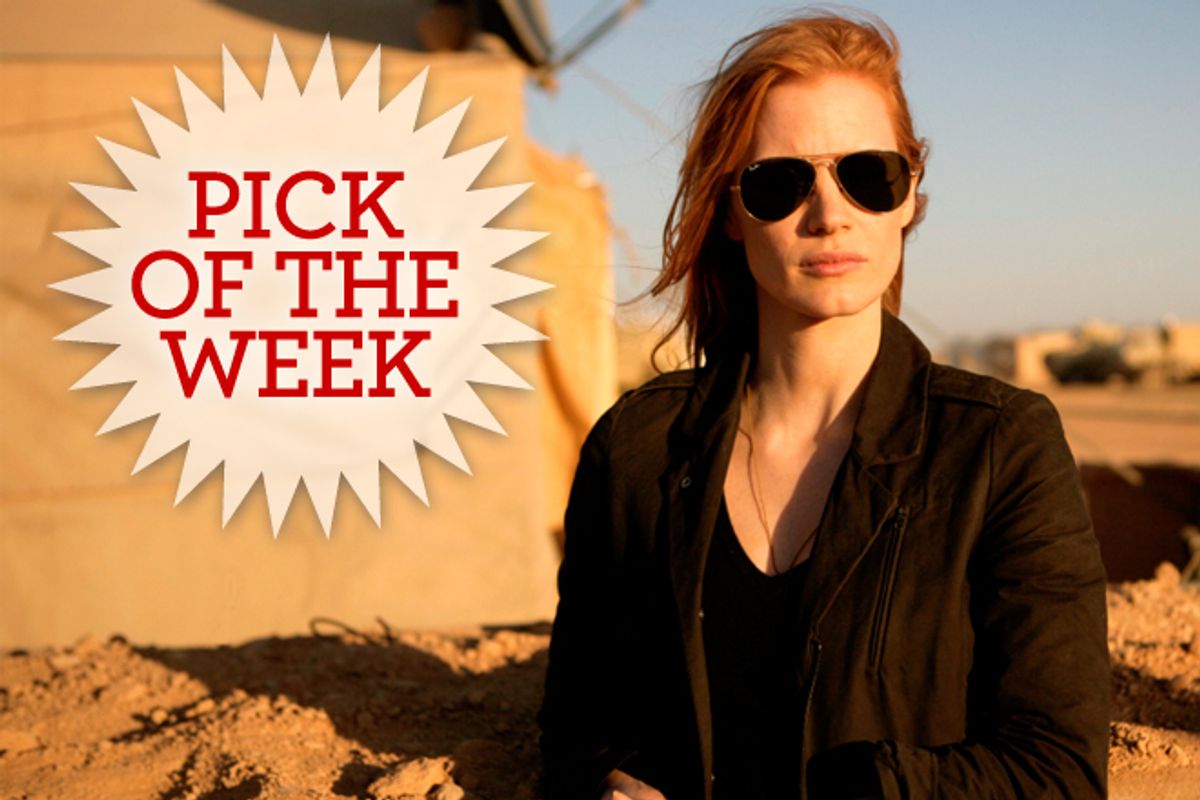 I do not believe that Kathryn Bigelow and Mark Boal’s mesmerizing, operatic and profoundly troubling “Zero Dark Thirty” offers any apology or justification for torture, and certainly does not “glorify” it, to use Guardian columnist Glenn Greenwald’s term. But it’s important to recognize that the people who think it does are responding to the moral ambiguity of the movie, which pervades not just the question of torture as an instrument of American policy but its entire portrayal of the CIA’s obsessive and insanely expensive hunt for Osama bin Laden. Here’s the sense in which they’re not wrong: What “Zero Dark Thirty” has to say about torture and many other things is not entirely clear, and what you see in it depends on what you bring with you. That moral ambiguity will drive some viewers nuts, but in my view it is also the quality that makes “Zero Dark Thirty” something close to a masterpiece.

Bigelow and Boal show us “what happened” in the secret history of spycraft that led from Sept. 11, 2001, to the bin Laden raid on May 1, 2011 – meaning their selective interpretation and dramatization of what happened, to be sure – without offering any explicit commentary or steering us toward a clear moral verdict. In our fractious political climate that makes people jumpy and anxious, and often overeager to proclaim that such a work can have a dangerous effect on weaker-minded viewers (but presumably not themselves). Indeed, one can argue that the mode of studied objectivity in both “Zero Dark Thirty” and the previous Boal-Bigelow film, the Oscar-winning “Hurt Locker,” is both a philosophical stance and a narrative tactic, calculated to fuel debate and controversy. I am not proposing, by the way, that Boal and Bigelow are actually “neutral” and have no politics or no opinions, since I don’t believe that’s likely or even possible. It’s just that those things are not written, Oliver Stone-style, on the surface of the work.

Despite all the recent headlines and largely uninformed controversy, only a small portion of “Zero Dark Thirty” concerns the black-site interrogations where torture was used. That looms large in discussions of the film partly because Bigelow throws us, and the driven young CIA redhead named Maya (Jessica Chastain) who will be the protagonist, into the deep end right away. After a haunting prologue in which we hear audiotapes from the collapsing World Trade Center over a black screen, the first thing we actually see is Maya’s arrival at a secret Pakistani facility where an interrogator named Dan (Jason Clarke) from the CIA’s “Saudi group” (i.e., the al-Qaida specialists) is working over an Arab detainee named Ammar (Reda Kateb), who may have been a mid-level al-Qaida moneyman.

Ammar gets pretty close to the full monty: He is beaten, sexually humiliated, deprived of sleep, locked in a tiny cabinet, subjected to hours of heavy metal cranked to 11 and, when they really want to break him, repeatedly waterboarded (albeit without a board). It’s dreadful to watch, even in dramatic form, and it poses the film’s central moral challenge right at the outset: One atrocity (meaning the 9/11 attacks) has provoked another. We have taken Dick Cheney’s famous taxi ride to the dark side, in search of justice or vengeance or whatever payback term you like. How has that worked out for us? What are the consequences of embracing not just the enemy’s tactics but the enemy’s essentially nihilistic worldview, in which the standards of universal morality that supposedly formed the basis of the Western world’s liberal revolutions simply do not matter?

Bigelow and Boal did not invent this problem out of nothing, people, and it’s not limited to the 9/11 era or the United States of America. Every single powerful nation throughout history, whether Western and supposedly enlightened or not, has used torture and brutality and state terror as instruments of policy, pretty much whenever it convinced itself it needed to. What has changed since, say, the end of the 18th century is that the great powers are now compelled to pay lip service to higher ideals and pretend that they never do such things, or to explain them away as aberrations perpetrated by rogue elements. When all else fails, there’s always the appeal to patriotism, still the last refuge of scoundrels, as it was to Samuel Johnson. We had to break the rules to “protect the homeland,” as characters repeatedly say in “Zero Dark Thirty,” which was approximately the rhetoric used to justify British torture in Northern Ireland, French torture in Algeria, American torture in Latin America and the Philippines, and on and on. Not an uplifting perspective on the topic, I know.

Back to the movie: Whether Ammar offers up any useful new information pointing toward Osama bin Laden, and what exactly Dan gets out of him through torture, are deliberately murky plot points. Some commentators have made it sound as though “Zero Dark Thirty” offers a clear cause-and-effect relationship, like an outtake episode of Fox’s odious “24”: They torture the hell out of some guy, he gives up Osama, the Navy SEALs bring death from above to that now legendary compound in Abbottabad, and it’s rah-rah USA! But the story this movie spins isn’t anything like that, and we’re a long way from idiotic ticking-bomb scenarios.

At most, Boal’s screenplay suggests that one detail emerged from this interrogation that would become important a long way down the line – but that it was actually information the CIA already possessed from other sources. Even that vague connection is contentious, since virtually everything about this story is. I suspect Boal's intention is more like this: Torture was absolutely employed by CIA interrogators on presumed al-Qaida detainees, and the people who practiced it apparently believed it was working. Therefore it's an important part of the story whether or not it really produced "actionable intel." “Zero Dark Thirty” absolutely does not imply that torture interrogations led directly to the shadowy bin Laden contact who in turn led the CIA to “the Sheik’s” Pakistani hiding place. It’s just as plausible to say that “Zero Dark Thirty” suggests that torture became a grotesque and unproductive sideshow that gummed up the works and slowed down the more normal forms of surveillance, coercion and subterfuge that constitute intelligence-gathering.

What I haven’t said until now is that “Zero Dark Thirty” is a sweeping and magnificent work of cinematic craft, by far the best film of Bigelow’s career. I’m not suggesting that the moral and ethical deconstruction doesn’t matter, but the movie is much bigger than that, and while you’re watching it you'll be too swept up in the moody, absorbing, doom-haunted narrative to focus on the picayune details. Although Chastain’s Maya remains at or near the center throughout – an intense, obsessive-compulsive woman with no known boyfriend or family or hometown -- this is a kaleidoscopic voyage with many strands and many characters, which moves from remote Afghan military bases to a hotel bombing in Islamabad to a freighter docked in Poland to the corridors of CIA headquarters in Virginia to a luxury car dealership in Kuwait City. (Standouts in the large cast include Jennifer Ehle as a more senior CIA woman, Mark Duplass as a surveillance technician, Joel Edgerton as the SEAL squadron leader and James Gandolfini as then-CIA head Leon Panetta, almost the only character with a known public identity.)

This movie reminds me, more than anything else, of Olivier Assayas’ tremendous miniseries “Carlos,” which is also a semi-journalistic epic of recent history with many interlocking real-life pieces, as well as a story about a worldwide manhunt. (The presence of Édgar Ramírez, who played the eponymous terrorist for Assayas, in a supporting role here as a military-intelligence tough guy, feels like an explicit nod.) It’s not surprising but at least a little ironic that “Carlos” too was attacked for withholding moral judgment, but from the other side. I remember numerous angry comments from readers who clearly hadn’t seen it, most of them presuming that if a French director had made a film about a famous '70s terrorist it must be a radical-chic hagiography.

In this case – well, in both “Zero Dark Thirty” and “Carlos,” actually – the moral dimension is woven into the story all the way along, and whether you want to respond to the film as a jingoistic celebration or an indictment of America’s role in the world is up to you. I would argue that along this journey and right up to its endpoint, Bigelow and Boal compel us to engage a series of difficult questions about the tactics, strategy, morality and larger meaning of both the search for bin Laden and the overall American response to 9/11. Certainly the issue of the CIA’s “enhanced interrogation” techniques under the Bush administration, in violation of both international law and basic standards of human decency, is central to that discussion.

But so, in fact, is the Osama raid itself (which arguably got Barack Obama reelected). Bigelow, cinematographer Greig Fraser and the production design team of Jeremy Hindle stage the Abbottabad raid, in the last half-hour or so of the film, as a supremely tense and exciting mini-masterwork of action cinema. I have no doubt that many or most American audience members will respond with enthusiasm, cheering and so on. Whether that’s really the appropriate response is another matter; I’ve heard audience members cheering the killings in “Dirty Harry” or “The Godfather” or “Unforgiven” too. As Open Salon blogger and critic Scott Mendelson pointed out in a pair of recent tweets, if the commentary-free depiction of torture in “Zero Dark Thirty” introduces a degree of moral instability, so too does the depiction of American troops staging a night raid on a private home in a sovereign nation with which we’re not at war, and shooting a bunch of apparent civilians who put up little or no resistance.

But as I’ve made clear by now, I believe that engaging with “Zero Dark Thirty” on narrow, quasi-legalistic grounds – asking whether it depicts torture as “useful,” and then debating whether such a depiction amounts to an endorsement – is missing the forest for the trees. (Does Shakespeare's "Julius Caesar" endorse political assassination? It's a tactic that's known to "work," and the conspirators had generally good intentions.) Whether or not they ever expressed it in these terms, Bigelow and Boal have tried to measure the hidden moral dimensions of an existential crisis that has eaten away at the American soul, and at the larger transatlantic liberal consensus that has governed the world since the Cold War. I would suggest that while Islamic fundamentalism is a dangerous force in many places in the world, the real enemy in this crisis is our own fear, along with our paranoid, quasi-religious sense of our mission in the world. Look at Fraser’s last shots of Maya, alone and uncertain, at the end of “Zero Dark Thirty,” and then come back and tell me this movie is hyper-patriotic torture porn.

Every viewer will react to this film’s conundrums in his or her own way: It is not merely possible but certain that people who do want to apologize for torture will conclude that the film supports their view. I believe those people are wrong, but then, I believe they’re wrong about lots of other things too. We’re coming to the movie from different places, and will leave that way too. “Zero Dark Thirty” holds a dark mirror before us; if what we see when we stare into it looks distorted and monstrous, it should also look familiar.