Does America hate its children? 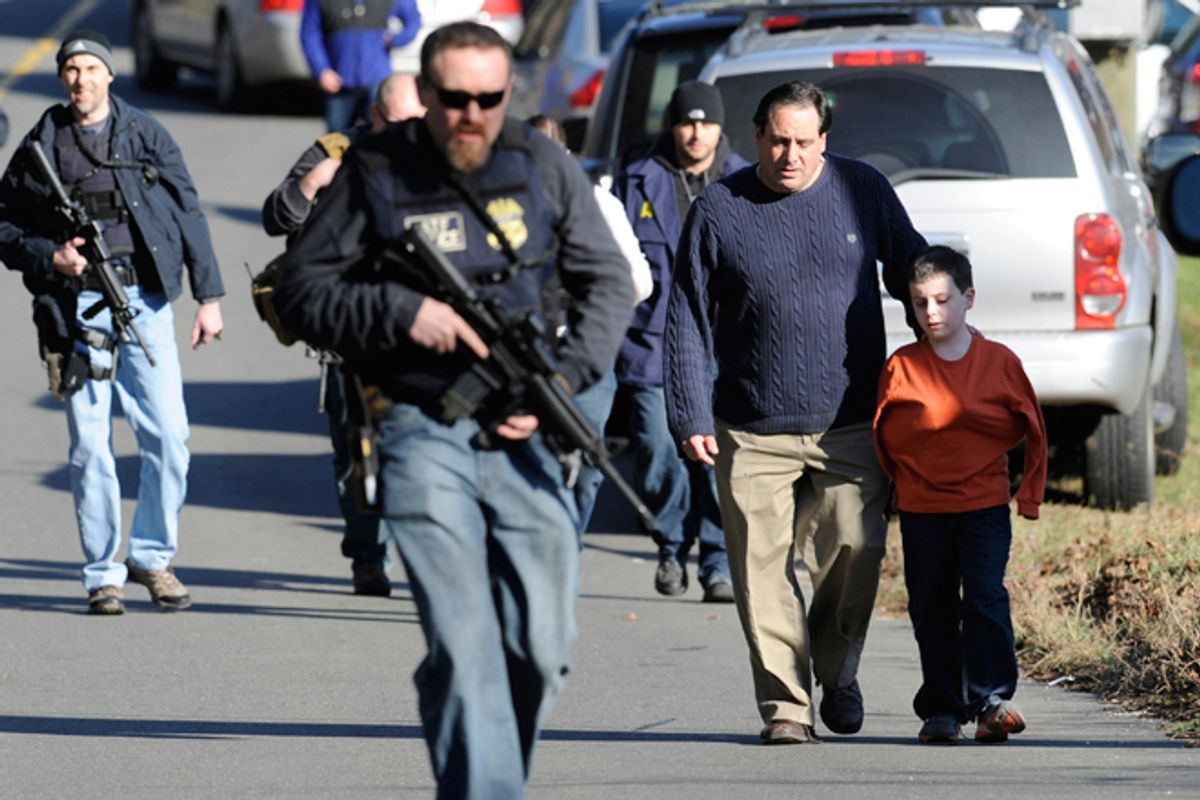 Parents leave after being reunited with their children following a shooting at the Sandy Hook Elementary School in Newtown, Conn., Friday. (AP/Jessica Hill)
--

America’s children seem to be shortchanged on almost every issue we face as a society.

Not only are we failing to protect our children from deranged people wielding semi-automatic guns.

We’re not protecting them from poverty. The rate of child poverty keeps rising – even faster than the rate of adult poverty.

And we’re not protecting their health. Rates of child diabetes and asthma continue to climb.

If we go over the “fiscal cliff” without a budget deal, several programs focused on the well-being of children will be axed — education, child nutrition, school lunches, children’s health, Head Start.  Even if we avoid the cliff, any “grand bargain” to tame the deficit is likely to jeopardize them.

At the same time, states and localities have been slashing preschool and after-school programs, child care, family services, recreation, and mental-health services.

Conservatives want to blame parents for not doing their job. But this ignores politics.

The NRA, for example, is one of the most powerful lobbies in America – so powerful, in fact, that our leaders rarely have the courage even to utter the words "gun control."

A few come forth after a massacre such as occurred in Connecticut to suggest that maybe we could make it slightly more difficult for the mentally ill to obtain assault weapons. But the gun lobby and gun manufacturers routinely count on America’s (and media’s) short attention span to prevent even modest reform.

The AARP is also among the most powerful lobbies, especially when it comes to preserving programs that benefit seniors.

We shouldn’t have to choose between our seniors and children — I’d rather focus on jobs and growth rather than deficit reduction, and sooner cut corporate welfare and defense spending than anything else. But the brute fact is America’s seniors have political clout that matters when spending is being cut, while children don’t.

At the same time, big corporations and the wealthy know how to get and keep tax cuts that are starving federal and state budgets of revenues needed to finance what our children need. Corporations systematically play off one state or city against another for tax concessions and subsidies to stay or move elsewhere, further shrinking revenues available for education, recreation, mental health, and family services.

Meanwhile, advertisers and marketers of junk foods and violent video games have the political heft to ward off regulations designed to protect children from their depredations. The result is an epidemic of childhood diabetes, as well as video mayhem that may harm young minds.

Most parents can’t protect their children from all this. They have all they can do to pay the bills. The median wage keeps falling (adjusted for inflation), benefits are evaporating, job security has disappeared, and even work hours are less predictable.

It seems as if every major interest has political clout – except children. They can’t vote. They don’t make major campaign donations. They can’t hire fleets of lobbyists.

Their parents and grandparents care, of course, as do many other private citizens. But we’re no match for the entrenched interests that dominate American politics.

Whether it’s fighting for reasonable gun regulation, child health and safety overall, or good schools and family services – we can’t have a fair fight as long as special-interest money continues to poison our politics.