An '80s icon talks about her star-studded cult hit (Jim Carrey! Michael McKean!) and the new musical it's inspiring 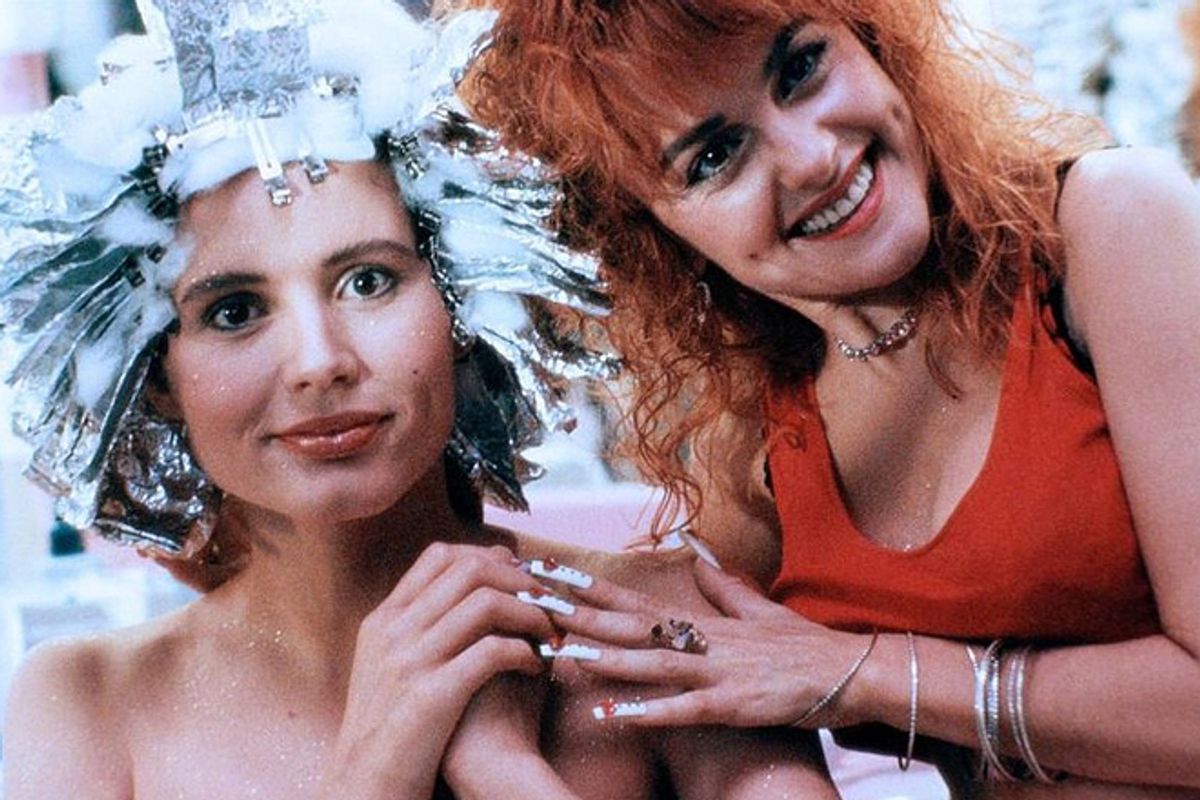 Geena Davis and Julie Brown in "Earth Girls Are Easy"
--

Nearly 24 years ago, a romantic musical comedy about a trio of space aliens who crash land in Southern California opened, boasting a real-life Hollywood golden couple, a Nile Rodgers score, a director who'd helmed "The Great Rock 'n' Roll Swindle," an almost too-good-to-be-true supporting cast that included Michael McKean, Damon Wayans and Jim Carrey, and a bevy of over-the-top musical numbers. It was also adorably silly, utterly unique and full of surprising heart. Yet in a year when cinematic romance was defined by "When Harry Met Sally," a candy-colored pastiche about a lovestruck manicurist and an unlikely, furry Mr. Right never found its footing at the box office.

Over time, "Earth Girls Are Easy" has developed a cult status as one of the most beloved — and the most 1980s-esque — movies to come out of the eighties, a big-haired, B-52's soundtrack-infused film that to this day is what we talk about when we talk about ERMAHGERD.

So when Brooklyn's Videology asked me recently if I'd like to host one of its Pajamarama! Slumber Party Classics, I had zero hesitation as to what cinematic bon bon I most longed to share. Time marches on and acid-washed jackets become extinct, but the females of our our planet proudly remain the easiest for galaxies. I spoke recently with the film's co-writer and co-star Julie Brown about the enduring allure of "Earth Girls" – and her plans to bring it to a new generation — as a stage musical.

I watched the movie again last week, and one of the things that makes it still so appealing is the chemistry of Geena Davis and Jeff Goldblum, who were married at the time.

They were so in love – obnoxiously so. They'd be making out in front of everybody. It made me pissed — I'd worked so hard; I had sweat bullets on this movie, and they were like junior-high-schoolers. But they really were in love, especially Geena. You can see it in how she looks at him.

(In her review of the film, the New York Times' Caryn James wrote, "This is the true sequel to 'The Fly,' with Mr. Goldblum once more playing the non-human creature Ms. Davis can't resist.")

And then there's Jim Carrey.

This was one of his first big things. I knew him from his standup act. When he did standup he just seemed all over the place. But then when he came in for the alien, I remember thinking, "Now that makes sense for me."

How did the idea of mounting it as a stage show come about?

Years ago, a guy from Australia wanted to make it into a musical. I was working on "Strip Mall" at the time and was like, "You guys go do it." ["Earth Girls" co-writer] Charlie Coffey and he got it together, and we did a reading in New York. I did my part, and Kristin Chenoweth did Valerie. But they took things about the movie and changed them so much, and they inserted a lot of existing songs the guy didn't have the rights to. So it didn't go anywhere.

I've been wanting to make a musical so long, but musicals take so much work. Everything you're doing is really a labor of love for a long, long time. The guy who did "Thoroughly Modern Millie" worked on it for nine years. I thought, "Who can do that?"

Now, my son just went to college. And suddenly, oh my God, I have this extra time. I can do all these things I've wanted. I'm adapting a Japanese cartoon series. And I've been working with Dennis Poore, who co-wrote "Brand New Girl" and "'Cause I'm a Blonde" for the movie, on the stage musical.

We're writing new material, but it doesn't even make sense to modernize the story. The music is so eighties. That's when I first started writing music, and I still love that era. It's such an amazing time; there are so many songs from that period that are so joyful.

But it's funny, because when you have the perspective of now, you can't help but incorporate it. I was originally supposed to play [Geena Davis's character] Valerie, and what became my character was going to be her gay best friend. So now we're working on a song called "Get to Know a Gay," about how once you have gay friends you're not going to be scared of gay people. But that element was already in there from the beginning. That's the perspective. It's going to take a while because we have a whole movie to interpret, but I hope we'll be able do a reading by the end of 2013.

With "Earth Girls," the idea in my head was always "The Wizard of Oz." Dorothy is in this place of longing, and she doesn't know what it is. That's what Geena's character is going through. She's at a level of dissatisfaction. And then this alien comes along, and suddenly she's willing to leave the planet with him.

It seems that "Earth Girls" is one of those movies that was born to be a sleeper.

It's really kind of weird. You have to handle a musical very carefully. When it came out it really didn't do very well. Then Fox used to have this thing called "Fox Night at the Movies," and every time it was on it was one of their best-rated movies. That's how it became a kind of cult classic. It was on all the time, and people loved it.

Salon and Bust present "Earth Girls Are Easy," a benefit for the Red Hook Initiative  and its ongoing post-Sandy community efforts, at Brooklyn's Videology on Wednesday, December 19, at 9:30. Co-writer and co-producer Terrence E. McNally and co-writer-star Julie Brown will be joining the event live via Skype for a post-film conversation.