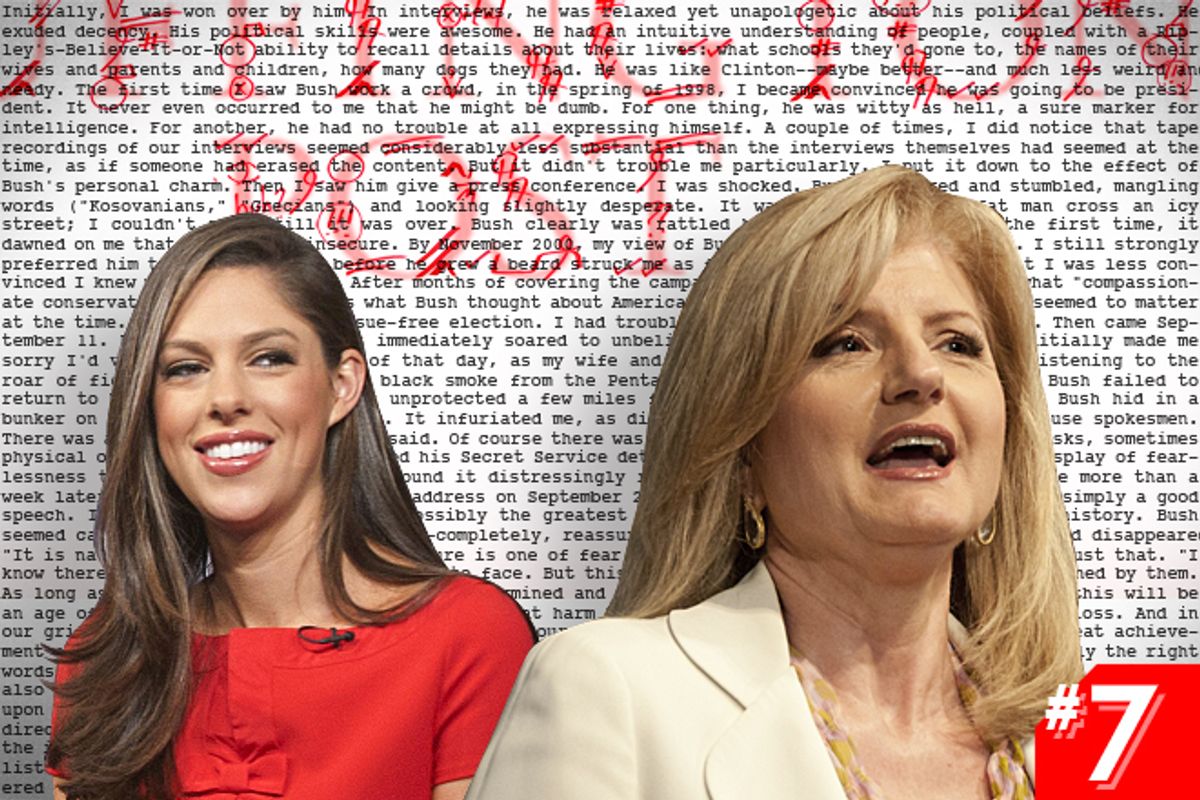 Arianna Huffington is brilliant. Her intellect is usually ignored by her detractors, who focus on her relentless ambition. Old-fashioned sexism taints so many pieces critical of Huffington that one sometimes feels a strong urge to defend her from the charge that she's cannibalizing and destroying American journalism.

But of course she doesn't need to be defended. She's very rich and famous and successful. And she's also completely nuts. Huffington is a cult member whose batshit mysticism has always infested her massive liberal community experiment. Her con artist gurus and quack "doctors" were always welcome to contribute to the Huffington Post's "Living" section. She even forced employees to attend "Insight Seminars" put on by an organization founded and run by the "guru" behind MSIA, a financially exploitative cult with a history of sexual abuse. That man, known as John-Roger, has his own author page at HuffPo, like so many of Arianna's good friends. He's had two blog posts (or "blogs," as Huffington still charmingly/annoyingly refers to them) run this year, both in the "Healthy Living" section.

Huffington's predilection for new age quackery is also what led to the Huffington Post being the Internet's most prominent home of anti-vaccine conspiracy theories, at least until public outcry -- and perhaps the AOL merger -- forced it to dial it back.

(Not related to mysticism, but fun fact: Huffington also once -- according to Ed Rollins -- hired a detective to look into Maureen Orth, who wrote a devastatingly mean profile of Arianna and her gay ex-husband Michael Huffington, back when they were married and Michael was running for Senate.)

For all that, the Huffington Post is not, as many of its critics would have it, destroying journalism with aggregation and side-boob slideshows. In fact, it has spent a lot of money paying talented reporters and commentators to write and report on a variety of subjects, including people I consider friends and writers I greatly admire. It is true that much of HuffPo's daily output is deeply stupid linkbait collated by underpaid early-20-somethings. It's also true that it publishes a huge amount of very good original reporting, from Washington and elsewhere, and among the zillions of blogs from celebrities and life coaches there are often useful and independent voices worthy of a platform.

But Huffington is constantly reinventing herself, and it seems like she's in the midst right now of a transition from self-appointed leader of the insurgent left to yet another member of the Davos class. She's going respectable. Practically Bloombergian. It's not just selling out to AOL and hiring people like the eminently respectable Howard Fineman. Huffington's teaming up with the useless moneyed futurists of TED to co-sponsor something called "HuffPost TED Weekends." She forced some staffer to write a worshipful review of Joe Scarborough's horrific musical tribute to 9/11. She hired Abby Huntsman before MSNBC could.

In Tampa this year, I saw her sit on a panel, moderated by establishment journalism legend Tom Brokaw, devoted to America's employment crisis. It was the usual CEO panel circuit bullshit, complete with the Aspen Institute's Walter Isaacson, but its star was Republican Ohio Gov. John Kasich, who, like so many other recent Republican governors, has devoted much of his time in office to battling public employee unions and pushing an ALEC-friendly batch of policies designed to weaken the influence of organized labor. Kasich was fawned over by Brokaw and Huffington. (And co-panelist Laura Ingraham, an old, dear friend of Huffington.)

This is the worst-case scenario for the massive HuffPo monster: It becoming just another arm of the Aspen Ideas rich moderate consensus bubble, the sort of place where Jon Huntsman is treated reverently and Peterson Institute shills are welcomed. It could become, in other words, an uglier version of the Daily Beast. Maybe we should've seen this coming when her liberal HuffPo co-founders Jonah Peretti and Ken Lerer jumped ship. Huffington's only real ideological commitment has always been to the act of networking. (Have fun in Amalfi with Newt and Callista!)

But however mainstream Arianna gets, we can take some small solace in the fact that she'll also always remain an embarrassing exemplar of West Coast limousine liberalism. In Tampa I also saw her "HuffPost Oasis," where local massage artists were snookered into giving well-paid journalists free massages, in exchange for the occasional tip and Arianna's financial contribution to a nonprofit that seeks to address the world's ills through the power of yoga. (The Oases -- there was also one in Charlotte -- were co-sponsored by Fiji Water, an environmentally disastrous corporation that supports the ruling military junta in Fiji.)