"Downton's" Rob James-Collier: "America does not like people being not nice to dogs" 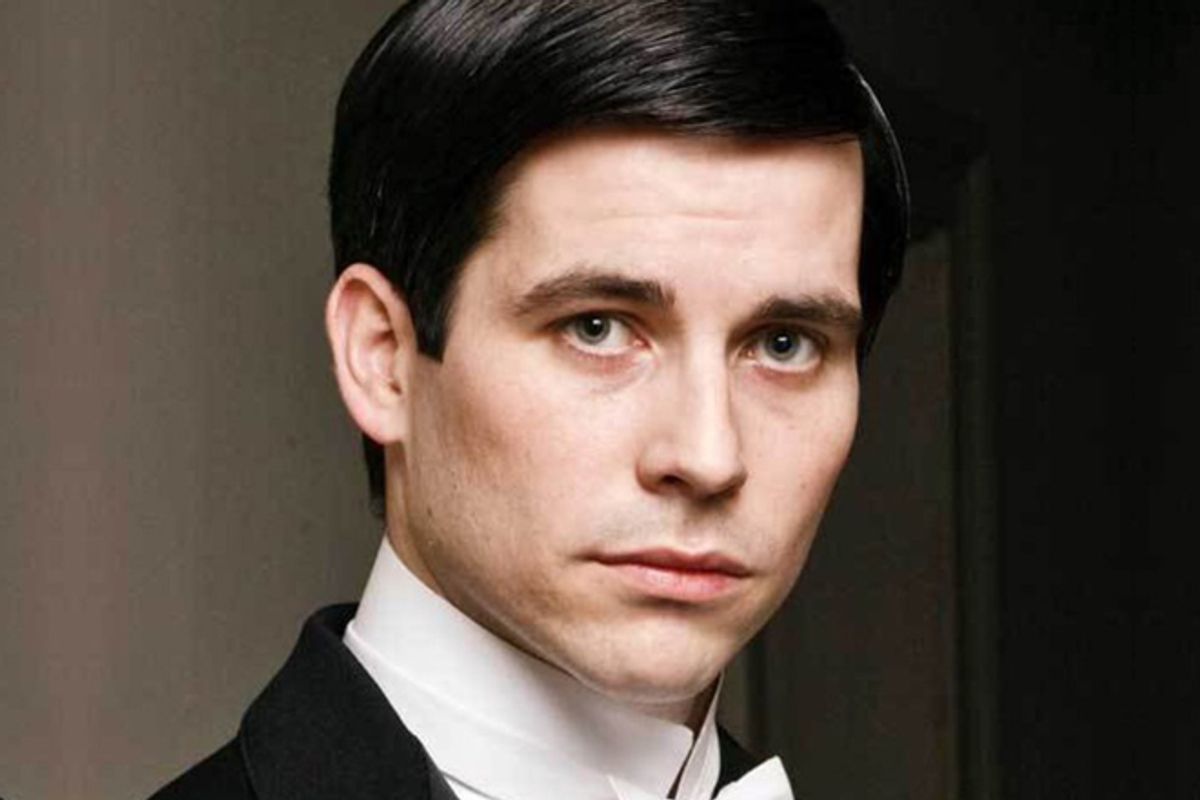 On "Downton Abbey," Rob James-Collier plays Thomas, the handsome valet always cooking up a scheme or jockeying for a position. Back in season one of the period drama — the third season begins airing on PBS on January 6th, having already played in England — we learned that Thomas was gay, an aspect of his character that gets much more fully explored in the coming season. James-Collier, wearing a blue sweater and some stubble, spoke with me about the series while he was in New York promoting the show. (The cast rode the subway while visiting because, as James-Collier joked, "We’re keeping it real. There’s a recession on. Saving PBS money; that’s what we’re all about.") He talked about what's to come on "Downton," the show's appeal and Americans' love of dogs.

Thomas’s storyline this year, which has to do with his sexuality, feels like the most modern and relevant of any this season.

I think Thomas is quite a modern thinker, in terms of the show. He doesn’t believe in the class system; he’s always questioned it. He’s always wanted to see it ended. He ventured out to become a businessman, an entrepreneur when he attempted to go on the black market. In them days, that was unheard of. So that’s modernistic. And he’s not ashamed of his sexuality, which in a time when it was illegal and against God, was no mean feat. There’s a great line in this season where he says to Mr. Carson, “I am not foul; I am not like you, but I am not foul.” And he says it with such dignity, and holding his head high, 'cause he’s like “I’m not apologizing for who I am,” which, again, is extremely modern attitude. He’s ahead of his time.

Speaking of the black market, how was doing that flour scene last season?

Oh, that was great. It was an added scene. I don’t think it was in the script originally that Thomas trashes the shed. So I went up to the director James and I said, “Listen, how mad do you want me to go on this scene, James?” And he just looked back at me and said “very mad.” And we’ve only got one take, so the stakes were very high, and I knew we couldn’t go again. So the adrenaline was going. How many times in your life do you get the chance to smash up an entire shed? Fate was on our side because I was throwing stuff around so much the door smashed open, and thankfully, it let in a shaft of light, which really lit the scene and made it look great, but also thankfully there were no crew members standing across the road. Everything worked. It’s a scene that everyone will always come up and talk to me about. They love the scene where Thomas trashes the shed.

Are there other scenes people often bring up to you?

The scene where I hid the dog in the Christmas Special. They do not like that. America does not like people being not nice to dogs. I got a bit about it in England, but over here, even more so. You can try and get an innocent man sacked and frame him for stealing. You can trip up Bates, who is essentially disabled. That’s all fine apparently, but put a dog in a shed overnight over here, and people are not happy.

He becomes much more sympathetic this season; he’s less the bad guy.

When I first started playing him, I thought he was a bad guy. But one of the benefits of being on a show like this is it gives you time to expand the role. You start thinking about it more. He’s an outsider. He’s built up these walls, and I think he’s a lonely soul who is quite sad in a way. He has weaknesses and insecurities, but he’ll never show them. It was really last year, I was thinking, “Well, why is he so angry?” Everyone’s got a reason. And we don’t have back stories, we have to make our own up, and I think his is rooted in his sexuality. That’s why I was glad when series three kicked off that we finally got to deal with the crux of Thomas’s sexuality and how that affects his view of the world, and his world’s view of him.

What do you think about criticism that the second and third seasons aren’t as good as the first?

I think this is one of our strongest series yet. And episode seven, which is the key point of Thomas’s journey, is my favorite, and I’m not just saying that because I’ve got a big storyline in it. It’s the other staff’s attitudes toward Thomas and his sexuality that I find fascinating, and how what one person does in the Abbey affects everyone in the Abbey. I think it was one of our grittier, darker episodes. “Downton” doesn’t normally do dark, but that episode, I think we did, and it was very suspenseful. In terms of the second series, I always thought it was different, because it had to tell the story of WWI. It wasn’t less good; it was just a different show. It was almost a completely different show to the first one. The public had gotten attached to the house and the Abbey, and they were taken out and transported to WWI. Obviously, it went back to the Abbey, too, but it became a different show. But three is my favorite series so far.

Why do people love "Downton" so much?

I think it’s the glamor of it — a bit of escapism. The nostalgia of yesteryear when everything seemed simpler, even though I’m pretty sure it wasn’t; we still had the same problems. The opulence of it. You know there’s a lot going on in the world today, and for an hour a week, you can sit down with your family — three generations, grandmother, mother and daughter — and watch the show together, as a family. It’s kind of wholesome. Jim Carter who plays Mr. Carson always says “It’s not cynical.” We are who we are. We deliver a specific kind of entertainment tailored for a specific audience, and we do it well, I think.