There really is a war on Christmas!

And it's being fought by some of the bravest atheists in the country, nonbelievers in rural areas and the heartland 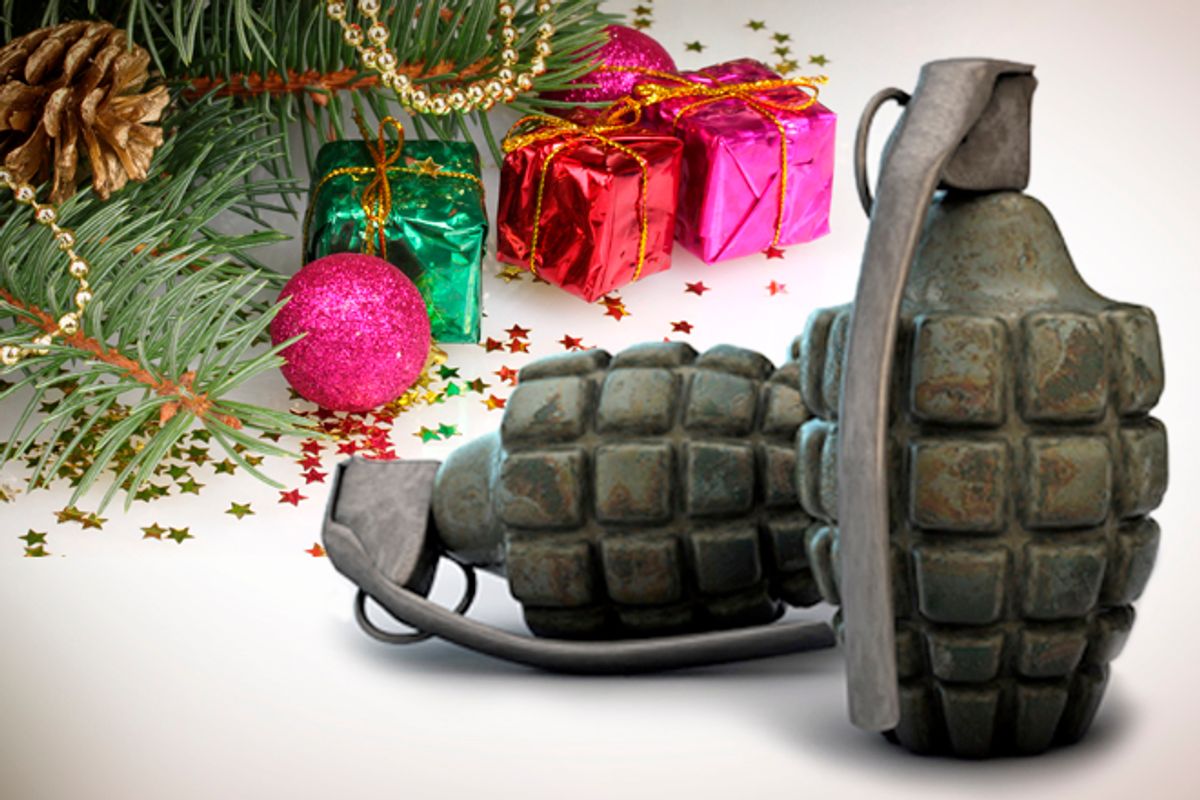 The Times Square billboard is not shy about its war on Christmas: "Keep the merry, dump the myth," it reads, juxtaposing an image of jolly St. Nick with one of Christ's agony on the cross. Sponsored by Cranford, N.J.-based American Atheists, the sign is funded in significant part by small-town nonbelievers nationwide.

"In New Jersey and the New York area, you don't have as much of a feeling of oppression. We have a very diverse population," says American Atheists managing director Amanda Knief, explaining the group's backing in rural and small-town America. She points out that their 2010 national convention in Newark, which included an Easter Sunday trip to the American Museum of Natural History, attracted few local participants. By contrast, the 2011 850-person Des Moines gathering drew more than half of its attendees from inside the state. "It was the first opportunity in Iowa for people who were non-religious to come together. And it was the first time where it was safe to do so."

Forget Hollywood and the Upper West Side. The angriest atheists are from the American heartland, where they live surrounded by the faithful. A 2007 Pew Research Center study found that 50 percent of rural atheists and agnostics see a "natural conflict between being a non-religious person and living in a society where most people are religious." That's 10 points higher than among their urban counterparts. Maybe Fox News' Bill O'Reilly has been looking for the War on Christmas and its "secular progressive" leaders in all the wrong places.

"Here's the bottom line: Where religion is weak, atheism is weak" in its intensity, says Pitzer sociologist Phil Zuckerman. "Where religion is strong, atheism is strong." Zuckerman has found that people in Scandinavian countries like Denmark and Sweden, among the world's most profoundly nonreligious, generally eschew the "atheist" label and even marry in Lutheran churches. He labels the dominant attitude "benign indifference."

"In small-town USA, people are much more likely to be anti-religious because they have religion thrown in their face all the time -- prayers at little league, prayers at city council meetings, Nativity scenes and Ten Commandments billboards, preachers on the radio and TV, etc. -- and their lack of religion is often associated with being immoral."

But take out the conservative Christian dominance, he says, and "the natural default position of secularity is a mere indifference to religion."

Indeed, most American atheists and agnostics are not hostile to religion as such, according to Pew's October study on the growing number of religiously non-affiliated Americans. Most do disagree with the idea that churches "protect and strengthen morality," and think that religions are "too focused on rules" and "too involved in politics." But an overwhelming 73 percent credit churches for strengthening community bonds, and 74 percent say they play an important role in helping the poor.

What's more, most American nonbelievers are not even atheists: while a fast-growing one-fifth of American adults, including one-third of adults under 30, now say they belong to no religious denomination, full-fledged atheists and agnostics make up just over a quarter of that number. Americans are by and large dropping out of religion, not taking up arms against it.

This certainly seems true in Pennsylvania, one of the country's most politically and culturally divided states. Or, as James Carville apocryphally phrased it, “Philadelphia and Pittsburgh with Alabama in between.” While nonreligious Philadelphians casually opt for brunch over church on Sunday mornings, the state's conservative Christian middle has witnessed fierce battles over Christmas -- fought out between neighbors.

A typical conflict unfolded in 2009 in the small and deeply religious city of Chambersburg, a place that would be unknown to most Americans save that it once served as David Brooks' caricatured icon of red state America in a 2002 Atlantic article. "One can feel the religiosity in Franklin County after a single day's visit," wrote Brooks, who stood in awe of a place so unlike Bethesda, Md., with “no Starbucks, no Pottery Barn, no Borders or Barnes & Noble. No blue New York Times delivery bags dot the driveways on Sunday mornings."

But the threat to Chambersburg's Times-less idyll came not from the Beltway but from an organization of central-state atheists called Pennsylvania Non-Believers, who in 2009 asked to place a tribute to atheist veterans in a downtown traffic circle alongside the creche installed each year by the local garden club. Instead, the Borough Council reluctantly closed the square-shaped lawn, ostensibly a military memorial, to everything but flowers and flags.

“No one had noticed how tattered the poor Christ child was looking,” longtime Public Opinion reporter Vicki Butler joked. But the outcry from the religious right, which angrily decried the meddling of outside agitators, was swift.

Two hundred people protested at the square and threatened a holiday boycott of Main Street shops. One sign read, “Where is the Christ Child?” and there were calls for mass Christian civil disobedience. Legacy Tattoo to J&B Bridals and Formals both offered to host the homeless Nativity scene, which ultimately moved just across the street to the front lawn of the Central Presbyterian Church.

PAN leader Carl Silverman, who the Public Opinion wryly noted had "shaped public policy in [the] Franklin County area before," was on the receiving end of the most personal invective.

"In these rural areas you find all these problems, and the only way you can deal with these problems is if you are outspoken and you are active," says Silverman, who has this year battled three Pennsylvania school boards over prayer at meetings and is currently investigating a school where a former professional athlete proselytized to students.

In the 1990s, Silverman discovered that the Gideons were handing out Bibles at local schools and threatened to hand out fliers titled "God Is Just Pretend" if they didn't stop. He attracted the attention of the New York Times in 1999, which chronicled his fight to take down crosses in a public park and to stop a Church Bulletin Day at the minor league baseball stadium in nearby Hagerstown, Md.

The creche war, however, was bigger than Silverman, and drew village atheists out of the woodwork. In 2010, I met five of them at their third meeting at a Chinese buffet, next to a Hobby Lobby, across the street from a Wal-Mart, off the highway just a few miles outside of town. PAN board member Brian Fields traveled 25 miles from the small town of Newville to offer the fledgling chapter his support.

“People in Chambersburg seemed to think there was such a hoopla for such a small minority,” Fields, now PAN's president, told me between bites. “We created the group to help them stand up for their rights and get to know other atheists. To make them know they are not alone.”

How, 36-year-old electronics technician Brad asked the group, could freshwater fish have survived the Great Flood? He was genuinely troubled by the discrepancy.

“I was raised very Christian,” said Brad. “I used to teach Sunday school. But about seven years ago, I began to have my doubts, studying the Bible and finding things that didn’t make sense.”

In 2009, he started driving 30 minutes south to attend freethinker meetings in Hagerstown. In small towns, church is often the center of community life. These meetings create a sort of substitute.

“I was very involved, even writing Christian music,” said Brad. “All of a sudden, something started tugging at the rug under my feet, and all of a sudden it was gone. I was looking for a foothold.”

Science provides many new converts to atheism with that foothold, and the celebrities of so-called New Atheism are often combative scientists like Richard Dawkins. And the strident tone fits.

“It is in-your-face explosive,” said a 30-year-old IT director named Josh Trayer, when asked about the area's religious life. “There’s a church on every corner.”

Andy, a member in his 60s, feels isolated in more ways than one: He is gay.

“I’m still pretty much in the closet as an atheist," he said. “I really need to do something, because I’m sick of feeling like I’m out in the middle of nowhere ... I think some of my straight friends would be more unhappy to find out that I’m an atheist.” This small group accepted him for being both.

Nonbelievers in a large metropolis are likely to take in a diversity of religious expression, including black Protestant ministers, Latino Catholics and liberal rabbis. Jerry Falwell might be on one side of a political debate, the Rev. Jesse Jackson on another.

"Patterns of religiosity are much greater in rural communities," says Daniel Cox, director of research at the Public Religion Research Institute. And those patterns are much more monolithically Protestant and evangelical. Cities, however, have a "level of diversity [that] leads to greater levels of tolerance for all different faiths, including atheists, agnostics and nonbelievers."

PAN experienced a schism later that year. The behavior of a man called "the Saint," who frequently paraded before churches throughout greater Harrisburg wearing a Guy Fawkes mask and holding a massive sign picturing Jesus giving the middle finger, was its subject.

When the Saint was a charismatic, faith-healing, tongue speaking, street-preaching Christian minister he walked around with those massive "you will burn in hell" signs. A graduate of Grace Bible College and Rhema Bible Training Center, he named his child "Praise."

"I’m having a hard time with him," the Saint told me. "Because we were 250 nights a year in ministry. Now I’m an atheist and he’s had all that his whole life, for five years, and that’s the hardest part: deconverting my kid.”

PAN ultimately expelled the Saint, but he was, at about the same time, named state coordinator of American Atheists -- a position he retains.

The public face of atheism has long been a militant one, and just how nice to be toward religious people has  been a subject of fierce debate among the minority of nonbelievers who cared to think about it. Madalyn Murray O'Hair, who founded American Atheists in 1963, embraced the moniker "most hated woman in America" and derided Christians as "Christers." She served as the lead plaintiff in Murray v. Curlett, the Supreme Court case that ended prayer in public schools. Murray was Phil Donahue's first guest when the show premiered in 1967.

"Friendly atheists" like Chris Stedman, the young assistant humanist chaplain at Harvard University and the author of "Faitheist: How an Atheist Found Common Ground With the Religious," likely have far more sympathizers among the swelling ranks of secular youth. But most friendly atheists don't care much about atheism. PAN, meanwhile, has a largely middle-aged membership. It recently held its first statewide conference, and drew a large crowd of 180. Only a dozen came from Philly.

When atheism is no big deal, atheists are less likely to think that religion is one either. Bill O'Reilly will have his War on Christmas for as long as he cares to wage one.