When Hollywood breaks into song!

To celebrate "Les Miz," we present the best — and worst — musical performances of the decade 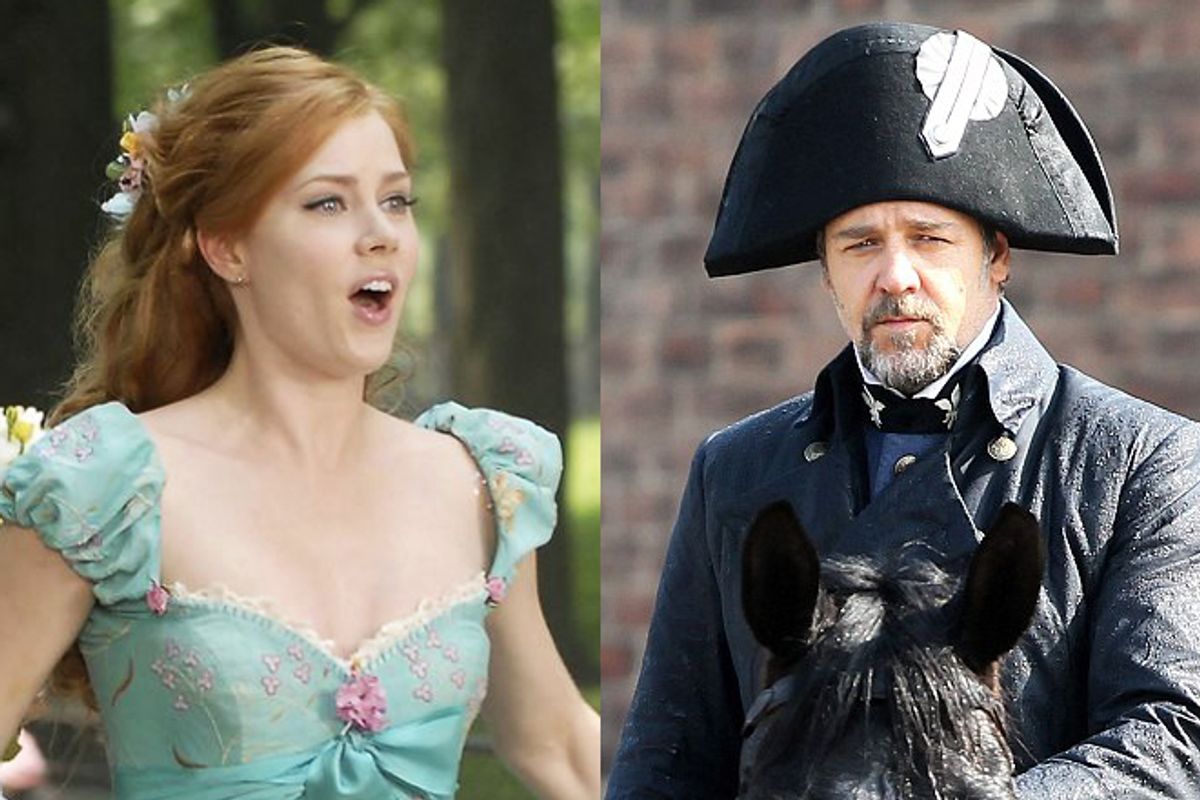 Amy Adams in "Enchanted" and Russell Crowe in "Les Misérables "
--

There was a time, long ago, when Hollywood musicals were made with performers with genuine musical aptitude. It was the era of luminaries like Judy Garland and Julie Andrews. And when a big-budget extravaganza demanded a famous name who happened to have a lesser voice, they'd just film the star and let Marni Nixon or Andy Williams do the singing.

But ever since somewhere around the time Woody Allen studded his nostalgic 1996 romance "Everyone Says I Love You" with a bevy of decidedly unmusical A-listers, the movies have become a parade of less than triple- — or even double- — threat actors flaunting their show-tunes-loving sides. Sometimes it works – evidenced by the heady Oscar buzz for Anne Hathaway's going-for-broke performance in "Les Misérables," a role that basically boils down to one show-stopping "I Dreamed a Dream." But sometimes, right within the same film, well, Russell Crowe happens.

In honor of two among the wild gamut that is "Les Misérables," we put together our list of the best and worst musical performances by actors in the past decade. We kept the criteria strict: no television or Web performances, thereby eliminating everything wonderful Neil Patrick Harris has done. And no musicians slumming it as actors, thereby knocking out everyone from Jennifer Hudson to Eminem to the Swell Season to Miley Cyrus — and even seasoned stage veteran Catherine Zeta-Jones. These instead are the pure movie stars, who, when asked to shut up and sing, either rose to the challenge — or fell flat.

In Jerry Seinfeld's castoff puffy shirt, struggling in almost childlike fashion over the enunciation of ev-er-eeee syll-a-ble, Butler somehow makes us wish he was just acting like a jerk in some Katherine Heigl or Jennifer Aniston rom-com. And when he hits a note so, er, distinctive it reverberates off the walls of his lair, it's infinitely more terrifying than mesmerizing.

As the sexy Swedish secretary, it's true that she's playing a character whose best assets are not located in her throat, but Thurman nevertheless projects a uniquely deer-in-the-headlights je ne sais quoi as she flails through the lackluster Mel Brooks musical.

Where have you gone, Danny Zuko? Swaggering uncomfortably in a dress and fat suit, Travolta unconvincingly declares "You Can't Stop the Beat" as if daring us to beg him to do just that.

Brosnan truly sets the bar – and then shatters it with his godawful caterwauling — for actors who should never attempt melody with his performance in the ABBA musical. We totally believe it's not acting when Meryl Streep looks horrified, runs away – and then keeps running – as he butchers "S.O.S."

He's got the bandanna; he's got the snake-hipped moves; he's even got an intonation that would not have been out of place had he ever done time in Warrant. But there's something about Cruise's utterly dead-eyed delivery of '80s hair metal hits that betrays a desperate lack of abandon. Would anybody ever really want to pour some sugar on that?

Crowe can actually carry a tune – and even do a perfectly respectable "Molly Malone" – when the occasion calls for it. But oh sweet baby Jesus he's wildly out of his depth every moment his strangled bleating goes up against the majestic Hugh Jackman. Miserable indeed.

As his Jimmy Early ages over several years, he goes from smooth and swaggery idol to washed-up has-been, and does so with slick, Motown-era aplomb. His Oscar-nominated turn stands out as one of Murphy's best performances, by a mile.

Adams, who's since gone on to serenade moviegoers in "The Muppets" and stage audiences in "Into the Woods," proved herself a true Disney princess in the 2007 fairy tale. Was there ever a sweeter voice to put to a song about cleaning a toilet? And who else could turn our urine-scented Central Park into a lavish, adorable flash mob?

If you think Grant's flashback as an '80s icon doing a bubblegum love song called "Pop! Goes My Heart" isn't a pure delight, you're dead wrong. And throughout every song in the movie, he's totally, cannily aware of just how featherlight his voice is, working a talk-singing style that makes the whole thing cheekily cute.

The film itself is only so-so, but Wood's sweet, soulful interpretations of Beatles classics are infused with just the right touch of melancholy.

How to win over the girl of your dreams? With a tipsy, gutsy karaoke take on "Here Comes Your Man." The brilliance of Gordon-Levitt is that he makes it look loose and effortless, while singing his wide-open heart out.

Sure, the visuals on her scorching performance of  "A Call From the Vatican" are unforgettable, but the Spanish actress more than holds her own vocally as well. No wonder she picked up Oscar and Golden Globe nominations for her role as Carla Albanese; just listen to her belt out the name "Guiiiiiido" and hear for yourself.

Bridges had sung before, most famously in "The Fabulous Baker Boys," but as grizzled, washed-up singer Bad Blake, Bridges brings a sad, compelling richness to his vocals. And he picked up the Oscar for best actor to boot.

Yes, she's thin and beautiful and frequently irritating, but you know what? Mrs. Chris Martin packs a punch as a fading Southern crooner – and her costar Leighton Meester brings it on just fine too.

If Gene Kelly were alive today he'd be Jason Segel – an irresistible, unabashed showman who makes bursting into song and dance look like an everyday routine. His 2011 turn cavorting with the Muppets may be the happiest any actor has looked doing his job in years.

Who knew that the Oscar-nominated ingénue and the scene-stealer from "Bridesmaids" could wail like that? Taking what could have been an extended episode of "Glee," the two stars instead delivered a sleeper hit. And their adorable and, yes, sexy a cappella "No Diggity" is a standout.