Drake does not own YOLO

Still, the singer wants credit -- and cash -- for popularizing the most annoying phrase of the year 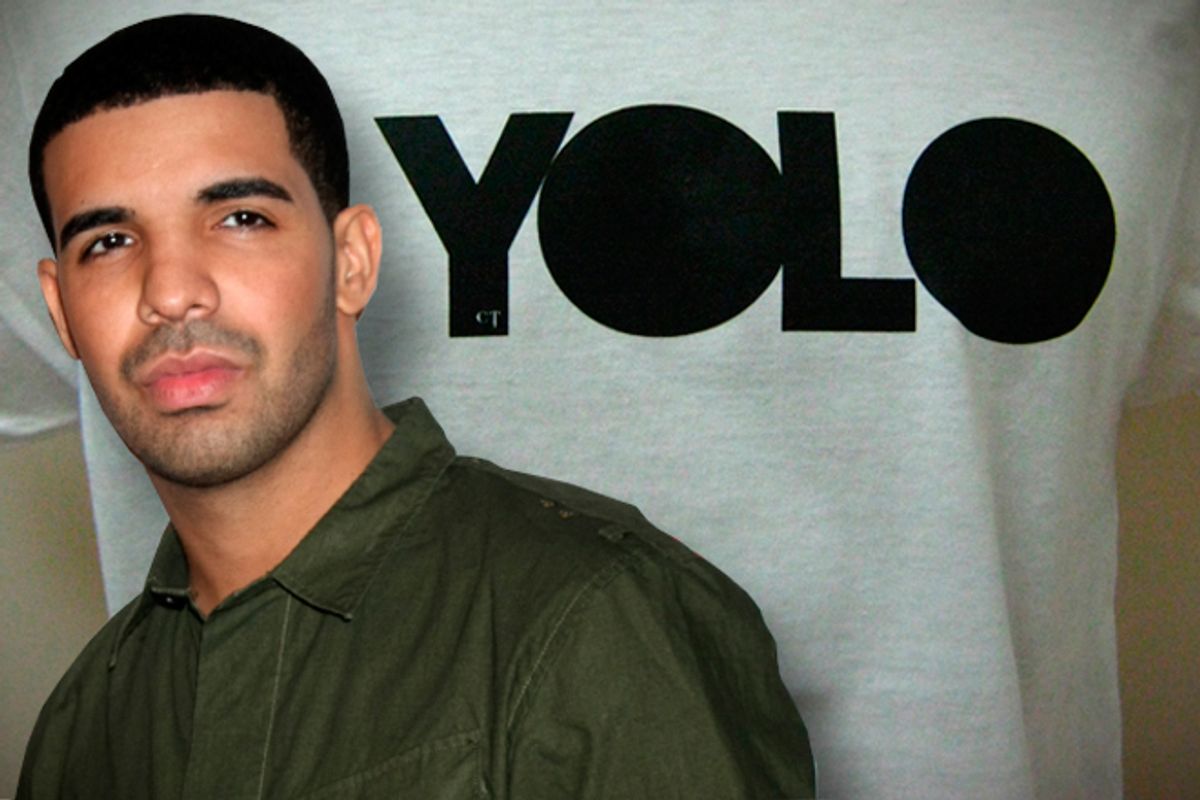 Drake is not a man who backs down from a dispute. Just ask Chris Brown. So watch your backs, Walgreens and Macy's.

On Christmas, the Billboard-chart-dominating star took to Instagram to vent his spleen against retailers with an image of a groaning shelf -- unironically designated "beauty" -- full of caps emblazoned with the acronym YOLO. "Walgreens....you gotta either chill or cut the cheque," he wrote in Canadian, adding a "Macy's...same goes for you" warning under a photo of a YOLO-themed Charlie Brown and Snoopy shirt. Coming soon: Morgan Freeman getting huffy every time someone mentions a bucket list, and Robert Carlyle issuing an injunction against all forms of Full Montyism.

Drake, contrary to his own apparent opinion, did not invent the phrase "You only live once" or the shorthand for it. Sure, he did tunefully help popularize the refutation of reincarnation with his hit "The Motto," but YOLO belongs to the world. In the past year, it's gone on to become the catchphrase for Katie Couric's talk show, a tattoo on Zac Efron's hand, a runner-up for Oxford American Dictionary word of the year and Internet shorthand for "This is how I announce and then justify my questionable life choices." It's the hashtag for every tweet that's involved jumping out of a plane, having sex with an ex, or eating sushi at an airport. YOLO!

For Drake to lay any kind of claim to it is, ergo, silliness in the extreme. And why he would even want to boast of any association with anything that bears the taint of both Katie Couric and Zac Efron is so crazy it almost makes one wonder if Drake's just going YOLO on us.

The other, highly probable, possibility of course is that Drake was merely being tongue-in-cheek in registering his vexation over the commercialization of all things YOLO. His rant was made on Christmas, after all. Who knows what the nog situation was at Drake's house? But his ire does have precedent. In 2010, Paris Hilton reached a successful settlement in her suit against Hallmark for using the phrase "That's hot" in a greeting card, on the claim that the company had violated her publicity rights. And if that can happen, somewhere, the guy who first said "It's all good" is probably building his case.

But if there's a monetizing to be had about a word that most disappointingly is neither a toy nor a frozen dessert, we think the wealth should be spread around. So please, Drake, every time some dope does something idiotic under the aegis of YOLO, can we get a check and/or cheque for having to hear about it? Because if I'm only going to live once, I want to live without ever seeing the word YOLO again.