After the pope denounces gay marriage, in a bizarre holiday message, the Church goes on the attack for "life" 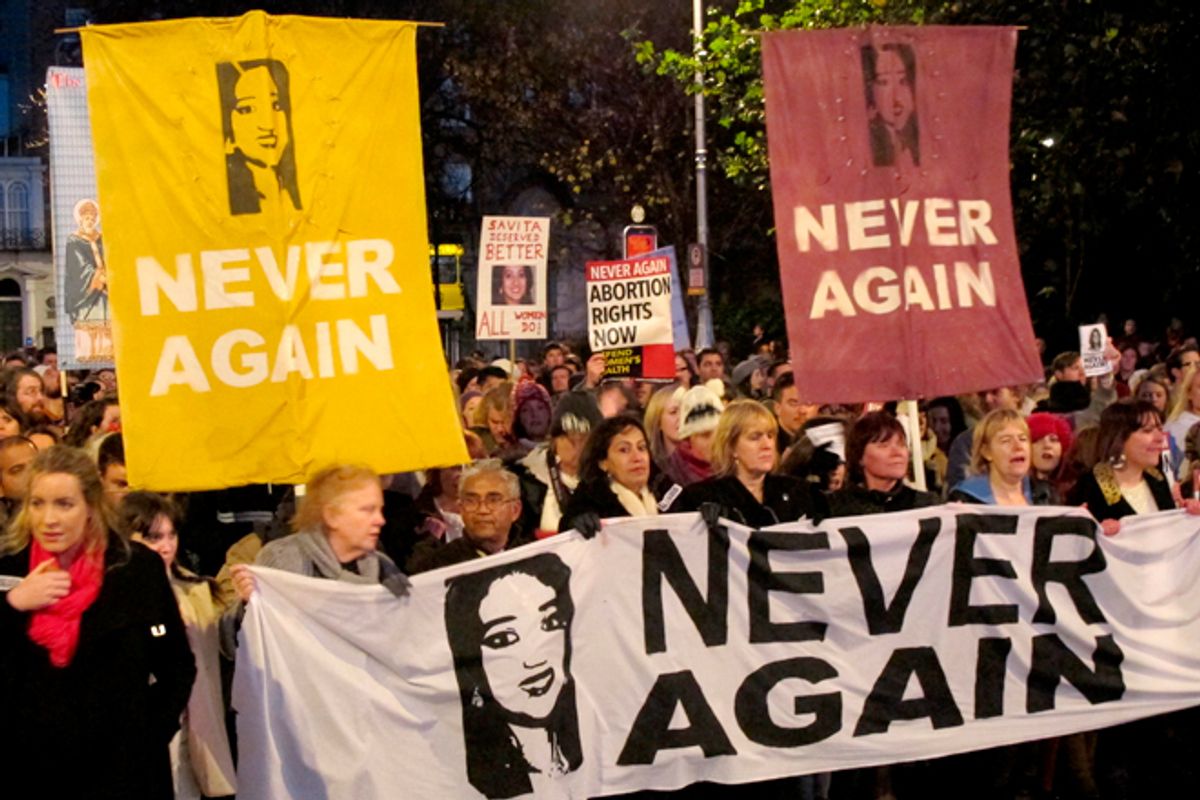 For the holidays this year, the Catholic Church chose to give the world the gift of bizarre, alienating and utterly missing the point rhetoric. Oh, you shouldn't have! We already got one of those from the NRA!

First, Pope Benedict XVI used his annual holiday message to the Vatican to denounce gay and lesbian progress as a "manipulation of nature" and an "attack" on the family. Now, Cardinal Sean Brady, the Primate of all Ireland, has used the galvanizing death of a pregnant woman in a Galway hospital as an excuse to double down on anti-abortion rhetoric. Guys, maybe next year you could ask Santa for a sense of timing and a pair of ears that aren't tone-deaf.

The harrowing, cruel experience of Savita Halappanavar, who died of septicaemia in October, has provoked unprecedented national outrage. Her widower alleges her doctors wouldn't intervene to save her life while her fetus still had a heartbeat, on the excuse that "This is a Catholic country." Now, following a wave of public protests and an advisory from the European Court of Human Rights, Ireland, the only European Union nation that still outlaws abortion, has begun the delicate process of loosening its restrictions. Earlier this month, Minister of Health James Reilly announced the government is introducing new laws that will permit abortion when the life of the mother is at risk. The new regulations will still be plenty restrictive – a mere risk to the mother's health will still not be sufficient to obtain an abortion, and Reilly assures that the changes will "clarify what is legal for the professionals who must provide care while at all times taking full account of the equal right to life of the unborn child."

Yet at a moment when a minute move toward preventing more women from dying in agony is finally on the table, Brady took the opportunity to deliver a Christmas message about "life" to the people of Ireland, urging, "No government has the right to remove that right from an innocent person." In case you're wondering, it's not the innocent life of Savita Halappanavar he's referencing here.

Nobody expects the Catholic Church to do a sudden, swift about-face on the topic of abortion. But instead of trying to whip up the masses with some phony-baloney rhetoric about honoring life, Brady – or any other Irish priest with an ounce of true courage – could have spoken out with compassion about a tragic loss. He could have extended condolences to her family. He could have mentioned that while the Church opposes abortion even to save the life of a mother – Pope Pius XI famously, chillingly declared that "However we may pity the mother whose health and even life is imperiled by the performance of her natural duty, there yet remains no sufficient reason for condoning the direct murder of the innocent" – it does however clearly insist "physicians must do everything in their power to save both the mother and the child." In other words, you can't just sit back and let a woman die.

In fact, even if you're sticking strictly with the letter of Catholic law, doctors are permitted to intervene to save a mother in any ways that aren't what is known in the Catechism of the Catholic church as "direct abortion." If a fetus doesn't survive as a result of a necessary procedure – for instance a lifesaving removal of a fallopian tube – that's not contrary to doctrine. That's why, even while the investigation into the death of Halappanavar is still going on, it's really not difficult to imagine, in a country that valued women's lives at least as much as it values fetuses, a situation where doctors could in good conscience have done a whole lot more to save her, even while allowing for the possibility that their actions might result in the loss of the baby.

So why aren't the likes of Brady talking about that? Why, as their nation is inching slowing toward an acknowledgment that it's pretty much the opposite of respecting life to let women suffer and die over a non-viable pregnancy, why isn't Catholic leadership speaking out with, at the barest minimum, a clarification of existing doctrine? A reminder that doctors have an obligation not just toward fetuses but mothers? A message of respect toward women? Instead, Brady, in his willful, insulting abuse of a holiday message, told his flock that "Public representatives will be asked to decide whether a caring and compassionate society is defined by providing the best possible care and protection to a woman struggling to cope with an unwanted pregnancy or by the deliberate destruction of another human life."

In a speech about life, he cravenly didn't mention Halappanavar's name. In a message of compassion, he ignored the lack of compassion that led to an avoidable death. Instead he said, "I hope that everyone who believes that the right to life is fundamental will make their voice heard in a reasonable, but forthright, way to their representatives." I hope so too. And I hope when they do, they remember the name of Savita Halappanavar.