Twitter made us laugh, made us mad — and sometimes it even moved us to tears 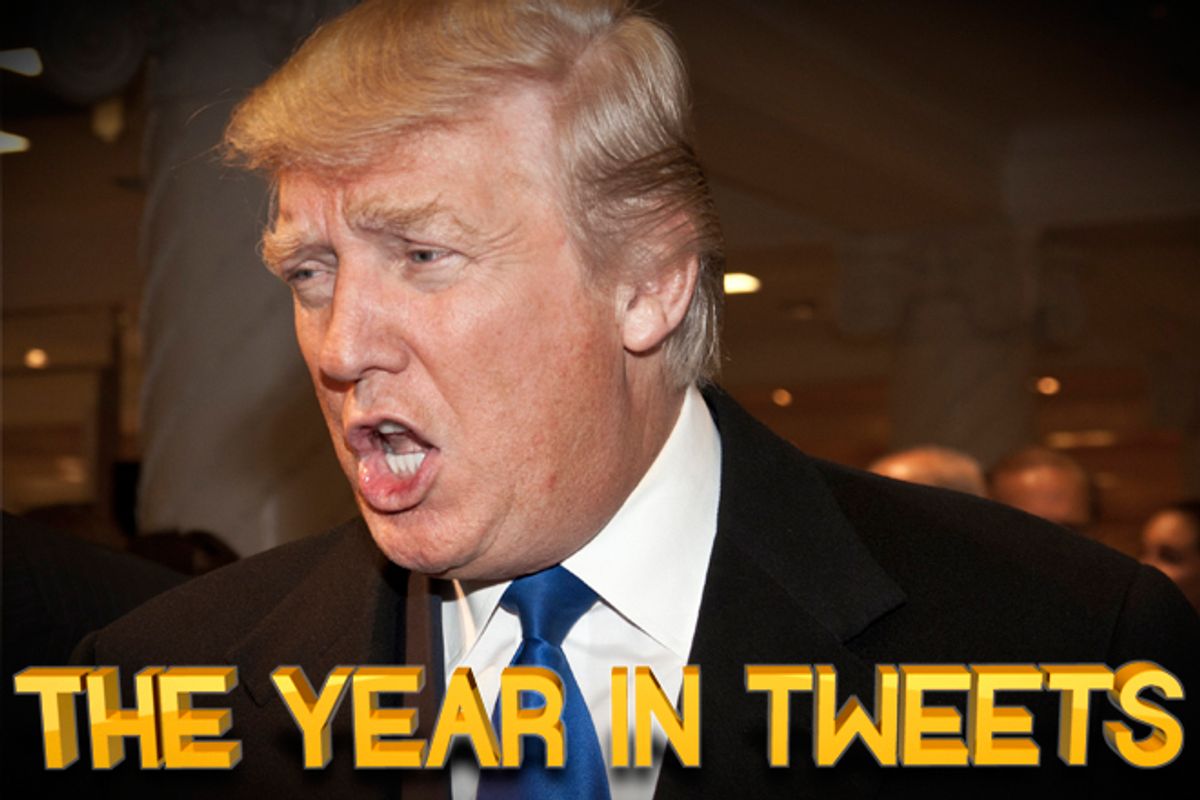 You can learn a lot in 140 characters. Twitter, for all its tyrannical and inflexible brevity, unfailingly reveals the gamut of human nature, the wonders and horrors of the world. There are now a mind-boggling 200 million or more tweets going out every day. But these 10 represent our choices for the ones that, for better or worse, sum up the year 2012.

After years of playing coy, the dapper newsman Anderson Cooper finally officially came out of the closet in an open letter to Daily Beast writer Andrew Sullivan on July 2. But though it came as zero surprise, a few remained undeterred by the news.

When Aetna informed doctoral student Arijit Guha, just as he was in the midst of stage-4 colon cancer, that he'd reached his insurance coverage cap, the 31-year-old took his story to Twitter and found himself engaged in a public conversation with his insurer's CEO, Mark T. Bertolini. He wound up getting full coverage – and making the debate over health care intimate and urgent.

His election night "4 more years" message would become the most retweeted post in Twitter history, but it was his cool dis to Clint Eastwood's absurd conversation with an empty chair at the RNC that showed the POTUS knows what social media is truly all about: landing an epic burn.

After the Green Bay Packers lost to the Seattle Seahawks -- thanks to the controversial call of replacement refs -- Packers guard TJ Lang succinctly summed up the outrage of players and fans alike.

There may not be life on Mars, but there's still social media. Ever since arriving on the red planet in August, Curiosity has been NASA's coolest — and most well-traveled — correspondent.

After Sandy ravaged the East Coast, the mayor of Newark -- already known for his talent for leaping into action while simultaneously tweeting about it — went into overdrive. And for the man who could turn one guy's Hot Pocket crisis into an opportunity, his finest moment may have come when he opened up his home to his neighbors who were without power.

Please let any1 on Homestead know they can come 2 my house & use the spare apt on 1st floor 2 relax, get warm, charge up etc @my_serenelove  —Cory Booker (@CoryBooker) November 1, 2012

Donald Trump's whole feed is one big litany of lunacy, but it was never more so than on election night, when the gruff reality show C-lister pitched an epic tantrum. He subsequently deleted some of his more uprising-flavored tweets, but enough of the meltdown is left to be entertaining.

This election is a total sham and a travesty. We are not a democracy! —Donald J. Trump (@realDonaldTrump) November 7, 2012

On November 6, Wisconsin's Tammy Baldwin became the first openly gay person elected to the U.S. Senate, and she had a few words on her place in history.

Adding to his long history of absolutely gross behavior, Chris Brown went on an epic, poorly spelled attack when comic Jenny Johnson lobbed an insult in his direction. He took a brief hiatus and deleted his account, but if there's one thing we know about Brown, it's that he never, ever learns from his mistakes.

In November, Bret Easton Ellis, the once-famous novelist, was so incredulous that an individual with lady parts could garner legitimate accolades, he insisted director Kathryn Bigelow owes her career to being "hot." He later issued a quasi apology, saying, "Were the Kathryn Bigelow tweets really that bad given the context they were tweeted in? The idea that some people thought I was becoming a 'shit-stirrer' was not only inaccurate, but failed to 'get' the context of Twitter," and then wisely announced he was taking a social media break.

Kathryn Bigelow would be considered a mildly interesting filmmaker if she was a man, but since she's a very hot woman, she's really overrated. —Bret Easton Ellis (@BretEastonEllis) December 6, 2012

When Barack Obama visited Newtown, Connecticut, after the deadly shooting at Sandy Hook Elementary, Cristina Hassinger posted a photo of the president with her baby daughter. Her mother, principal Dawn Hochsprung, had been shot and killed trying to protect her students. It's a defining image of the year.

My mom would be SO proud to see President Obama holding her granddaughter. But not as proud as I am of her. twitter.com/Chass63/status… —Cristina Hassinger (@Chass63) December 17, 2012