The new education "reform" fight is over who chooses school boards: the mayor or the people. One city fought back 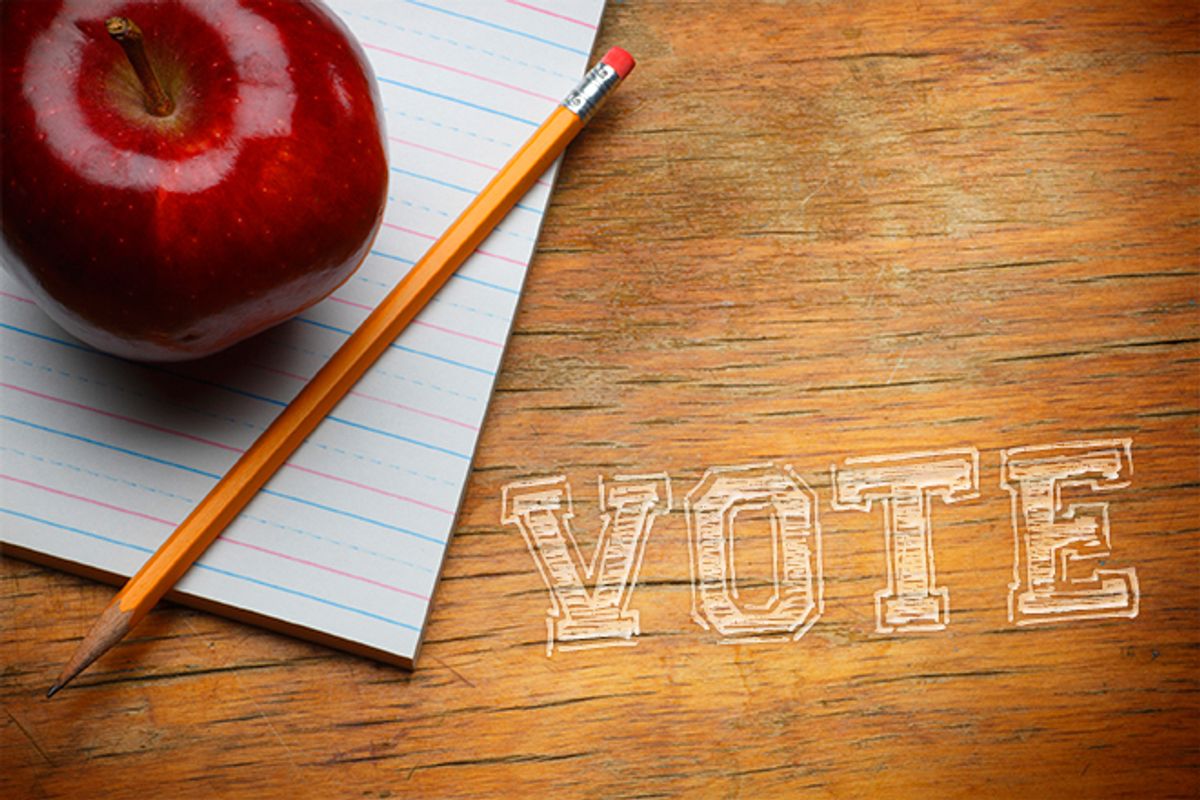 On Election Day 2012, as voters around the country chose between two presidential candidates who both touted policies that would make it easier to fire teachers, voters in Bridgeport, Conn., rebuffed a referendum backed by Michelle Rhee, Michael Bloomberg and the local Democratic Party. By a seven-point margin, Bridgeport rejected city charter changes that would have ended school board elections. It’s the latest round in Bridgeport’s multi-year battle over a below-the-radar front in America’s reform wars: Who should pick school board members – mayors or voters?

“Nobody thinks that a bunch of hedge fund managers from Greenwich are going to make their schools any better,” said Lindsay Farrell, the executive director of the Connecticut Working Families Party, one of the groups that spearheaded the opposition effort. “And the right to vote has been a hard-fought right. So people were reluctant to give it up and didn’t trust who they were being asked to give it up to.”

2012 has been a tough year for critics of the bipartisan education reform consensus. In the statehouses, legislators passed bills narrowing teachers’ collective bargaining rights. Big-city mayors and Hollywood celebrities linked arms to tout bills paving the way for a new wave of privately-managed, non-union charter schools. There were bright spots for the left: The Chicago Teachers Union, by building deep ties in the community, offering a left-wing alternative vision for reform and mounting a spirited strike, beat back concessions demanded by Mayor Rahm Emanuel. But the CTU’s aggressive opposition to the education reform consensus remains a minority approach within the country’s teachers unions – let alone within the Democratic Party.

The current struggle over Bridgeport’s school board stretches back to 2009. That was the year that the Working Families Party, a union-backed third party focused on economic issues, seized three board seats previously held by Republicans. (Bridgeport is an overwhelmingly Democratic city, but by law, no single party can hold more than six of the board’s nine seats.)

Sparks flew right away. According to Farrell, immediately after congratulating the new WFP school board members on election night, Mayor Bill Finch told them that he believed Bridgeport should become more like New York City, which has an appointed school board. “He was basically telling people who had just won an election, on election night, that elections shouldn’t exist,” said Farrell.

While the new WFP members took only a third of the board’s seats, “they were very effective at questioning the status quo and the powers that be about what they were doing or not doing for the children of Bridgeport,” said Bridgeport teacher Rob Traber, the vice president of the Bridgeport Education Association. By 2011, with the city’s then-superintendent proposing unpopular budget cuts, Traber said the city’s political and business leaders became “afraid that they might lose control of the board” in that year’s November elections.

Those elections didn’t happen. In a July 2011 move supported by Finch and Gov. Dan Malloy, majorities of the Bridgeport school board and the Connecticut state board of education voted for the state to replace the Bridgeport board with its own appointees. Those included business leaders from outside the city. In February 2012, the Connecticut Supreme Court overrode the takeover, restoring Bridgeport school board elections and forcing a September 2012 special election to replace the replacements. Last summer, Mayor Finch and his allies launched a push to pass a November 2012 charter referendum that would once again end school board elections.

Joshua Thompson, Finch’s director of education and youth, defended the unsuccessful effort, saying the mayor was following the recommendations of “a report handed back to him” by a charter commission that was based on testimony by academics and “major reformers” like former New York City schools chief Joel Klein. “It seemed to be the best way to move school reform that’s deserving of our children,” Thompson told Salon. He said that maintaining an elected school board “would almost be perpetuating the definition of insanity” because it has shown an “inability to carry out what’s necessary for our children.” Thompson added that “taking the politics out” was “a catalyst” for reforms elsewhere.

Many critics of such reforms agree that they’re more likely to advance in the absence of elected school boards. “The reason people want mayoral control is they want more privatization faster,” former assistant U.S. secretary of education Diane Ravitch told Salon. “And the best way to get more privatization is to have only one person to deal with and to not have to listen to a board of education.”

In the weeks before the election, “the mayor and the corporate community pulled out every stop,” said Jonathan Pelto, a former Connecticut state legislator who’s consulted for unions. Pelto noted that the referendum effort received support from Michael Bloomberg, major businesses and former D.C. schools chancellor Michelle Rhee’s Students First. Sacramento Mayor (and Rhee's husband) Kevin Johnson came to Bridgeport to stump for the measure. (Students First did not respond to Salon’s request for comment.)

So why, in a year rife with setbacks, did progressives beat Rhee in Bridgeport? Advocates credit years of coalition-building and weeks of door-to-door canvassing. “I think one lesson is that there are no shortcuts,” said Farrell. “You have to do the organizing.” But she said the victory also showed that “when we talk about it in terms of democracy … we get farther than the old frames we’ve been using.”

Traber, whose union was a top funder of the anti-referendum effort, said the coalition made a pragmatic decision to focus its message on voter disenfranchisement rather than education policy. “We determined that if we allowed them to define the question on the basis of fixing the schools – even though we don’t think their solution is going to fix the schools – that they would win,” he told Salon. “But if we argued the case on the question of, ‘Under what circumstances does a citizen have the right to vote?,’ we would win.”

“I think there’s a large misnomer,” countered Thompson. “It was turned into, however people want to characterize it, as a ‘voter rights’ issue or what have you … Did you get to vote for Secretary of State? No.” Thompson noted that the school board issue was only one of many aspects of the charter referendum question, and said that the September election victories of some school board members who had originally been appointed was a sign of “people saying, ‘We like what’s been going on.’”

Pelto said that the mayor’s referendum campaign was also hurt by the perception that the city’s “white establishment” was trying to curtail voting rights in a majority non-white city whose public school students are overwhelmingly African-American or Latino. “It really came across as, ‘Don’t elect the board, let the white mayor elect the board,'” said Pelto. It didn’t help, he added, that “three of the last four or five mayors of Bridgeport have either gone to federal prison or resigned under the threat of going to prison.”

Having won the battle, said Traber, progressives now need to win the debate over charter expansion and high-stakes testing – beginning with citizens who voted to keep their right to elect the school board but might not oppose such “reforms.” He said that corporate-backed education reform efforts have gained support in part due to austerity and inequality: “The problem is there is a lack of resources devoted to the education of our children … The public sector is not in a position to address that problem, even though that’s where the solution should come from.” And so when private-sector players offer to fund projects in line with their ideology or interests, “that gives them great traction.”

Bridgeport has more education battles ahead. The school board is expected to vote within months on whether interim superintendent Paul Vallas, who’s clashed with reform critics during his tenures in Chicago, New Orleans and Philadelphia, will become Bridgeport’s permanent schools chief. Thompson told Salon that the Mayor’s upcoming priorities include expanding high school options, creating a military first-responder academy and raising “external funds” for increased early childhood programming. Asked about charters, he said “we can learn from anyone that’s getting success” and that whether their ranks grow will be in the hands of the superintendent and the legislature.

Meanwhile, battles over who chooses school board members could spread elsewhere in 2013. Traber said that his side’s referendum victory has already piqued interest in pushing for elected school boards in other major cities in Connecticut. And in non-binding referenda held in some Chicago precincts on election day, most voters expressed support for taking back the power to choose school board members from Mayor Emanuel.

While his side was routed on Election Day, Thompson said, “For me, the victory is that 30,000 people showed up and voted on an education issue.” Asked whether he was concerned that ending school board elections would have reduced such civic engagement in the future, he answered, “Absolutely not. There was no concern about that ... We need to have folks that are just focused on our children.”