Pick of the week: Beautiful white people hit by tsunami!

Pick of the week: Naomi Watts and Ewan McGregor see their Euro-privilege swept away in "The Impossible" 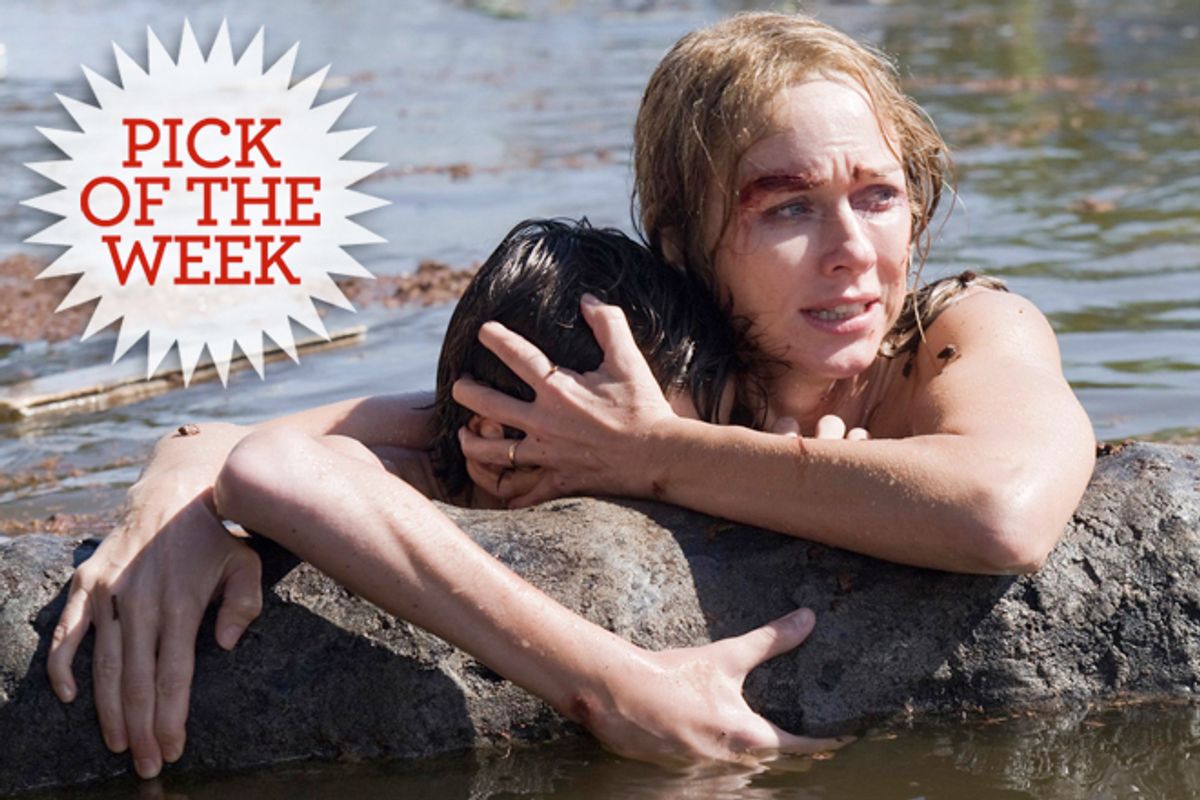 Naomi Watts in "The Impossible"
--

Using natural disaster – or manmade apocalypse, ecological catastrophe, alien invasion – as the backdrop for human drama goes clear back to the invention of cinema as spectacle, and arguably a long way before that. Of course we’re not supposed to think that the big, dramatic flood is the main point of the Noah story in the Book of Genesis, or in the Epic of Gilgamesh. But it certainly helped hold the audience’s attention. Given that, it’s surprising that mainstream filmmakers have all but ignored the devastating Indian Ocean tsunami of 2004, an event that killed almost 100 times more people than the 9/11 attacks and may well have been the worst natural disaster in recorded history.

It might sound unbearably cynical to suggest that the problem with the tsunami, in Hollywood terms, is that not enough white people were involved. But let’s consider the evidence: The tsunami played a supporting role in Clint Eastwood’s murky supernatural drama “Hereafter,” and takes center stage in “The Impossible,” an intense and compelling family melodrama from Spanish director Juan Antonio Bayona that sets a new standard for disaster cinema. In both cases, the people swept away toward an ambiguous destiny by the deadly waves are blond and beautiful Europeans. Now, it’s perfectly true that something like 9,000 foreign tourists died in the tsunami (around 4 percent of the total), and many more were injured. It’s not like their suffering doesn’t count. But I think we all understand why the hundreds of thousands of Indonesians, Sri Lankans, Indians, Thais and so on affected by the disaster become extras in the Hollywood version.

In “The Impossible,” the level of mendacity is so close to the surface, in fact, that it lends the movie an uncomfortable subtext that may or may not be intentional. It’s important to understand that this is an unusually expensive Spanish film, not exactly a Hollywood production, even though it was made in English and features a pair of major stars. The screenplay by Sergio G. Sánchez is based on the first-person account of a woman named María Belón, who survived the tsunami in Thailand along with her husband and children and provides the basis (and name) for Naomi Watts’ character in the film. On screen, Belón and her dark-haired, Spanish-speaking and average-looking family are transformed into the WASPy gorgeousness of Watts and Ewan McGregor, complete with upper-middle British Isles accents, business-caste money problems and three adorable little boys. First and foremost, this was a marketing decision; movies in English featuring recognizable stars have a worldwide audience that Spanish cinema simply doesn’t. But on a more devious level, it’s also a dramatic decision, to show that this kind of event temporarily erases even the most extreme forms of privilege.

What I’m working around saying is that, yes, I was troubled by the way “The Impossible” presents the tsunami as a story of white people in distress, but also that Bayona uses the angst thus generated to the movie’s benefit. Bayona made an immediate impression on genre-film buffs with his tremendously atmospheric 2007 shocker “The Orphanage,” and this too is a horror movie, wearing the mask of docudrama realism. From the very first moments, when McGregor’s Henry, Watts’ Maria and their boys descend toward a Thai airport aboard a luxury jumbo jet, the director manifests a superlative level of technical control, making your theater seat rumble with the slightly unsettling feeling of air turbulence. (This movie is worth seeing in a big-screen theater with a good sound system, if you can possibly manage it.)

That turbulent descent is nothing serious, but they let us know who’s in charge and introduce the movie’s central theme, the fragility and instability of our cosseted first-world existence. Henry and Maria, along with 10-year-old Lucas (Tom Holland) and his moppety younger brothers, soon find themselves ensconced in an unbelievably luxurious Thai beachfront resort. It’s Christmas Eve of 2004, and the Indian Ocean is a calm and gorgeous blue. But of course we know what’s coming, two days later. Bayona has carefully studied Hitchcock and other masters of manipulation; these quasi-Edenic early scenes play to our baser instincts of envy and desire, but also feed a near-religious sense of Schadenfreude. A flick of God’s finger, a random natural event or the result of environmental devastation and overdevelopment – take your pick -- and this too shall be swept away.

I don’t want to give away too much about the extraordinary special-effects scenes Bayona uses to depict the arrival of the tsunami, its immediate aftermath, and the family’s struggle to survive. Then again, I probably can’t, because this is the kind of holy-cow, hell-for-leather, how’d-they-do-that? cinema that cannot be rendered in words. From the moment the tropical-drinks blender at the poolside bar quits working, and a strange wind off the seafront sucks random objects against the fence, we’re thrust into a paradigm-shifting apocalypse that feels entirely too real. Then the tsunami hits – we hear it and feel it, more than see it – and Óscar Faura’s camera goes careening along with Maria in a series of remarkable extended stunt shots across the transformed and inundated landscape. This movie cost around $45 million to make (an immense sum for the European industry) but as a work of craft and technique it outdoes many Hollywood movies that cost triple or quadruple that amount.

In the immediate aftermath of the big wave (which was actually a series of several big waves) Maria and Lucas find themselves alone in a scene of destruction that feels eerily familiar, both because we’ve seen it on the news and because we’ve seen it in dozens of end-of-the-world science fiction scenarios. It’s been said that the 2004 tsunami had more destructive force than all the bombs dropped during World War II put together, and here Bayona makes it feel like the primal event of our time, bringing together scenes from Sandy and Katrina and 9/11 with images from zombie movies and J.G. Ballard’s fiction. Amid the swampy morass of demolished sheds, downed palm trees and flooded Datsun pickups, Maria and Lucas find a cherubic little boy, unhurt but abandoned, and climb a tree with him, as if ready to begin human society again from nothing.

In fact, “The Impossible” is definitely not a story about the demise of civilization and a return to savagery. Relatively few people died in Thailand, a modern and reasonably affluent nation whose citizens volunteered by the thousands to rescue tsunami survivors, whether Thais or foreigners. “The Impossible” is never less than compelling, with a series of wrenching and visually impressive set pieces staged in overcrowded hospitals and refugee centers as the estranged members of Maria and Henry’s family struggle to stay alive and find each other. Both McGregor and Watts give performances that are mainly feats of athletic endurance, with Watts' portrayal of Christ-like near-death agony the more memorable of the two. (Academy voters uncomfortable with either Jessica Chastain playing a hard-ass spook in "Zero Dark Thirty" or 85-year-old Emmanuelle Riva in "Amour" may end up giving Watts an Oscar nomination.)

After the waters recede, Bayona gradually drifts into a more conventional mode of family melodrama, using his magnificent technical control to reassure us that order can be restored to bourgeois existence, even after an event as devastating as this. In fairness, the movie never entirely loses its faint note of irony, and there are recurring reminders that not every family, by a long shot, enjoyed a loving reunion and then got flown home at an insurance company’s expense. Both here and in “The Orphanage,” Bayona reveals himself as a masterful genre stylist of almost unlimited talent and a storyteller addicted to sentimental happy endings that feel a bit sardonic. Like, it’s all OK now – but just wait till next time!

“The Impossible” opens nationwide this week.