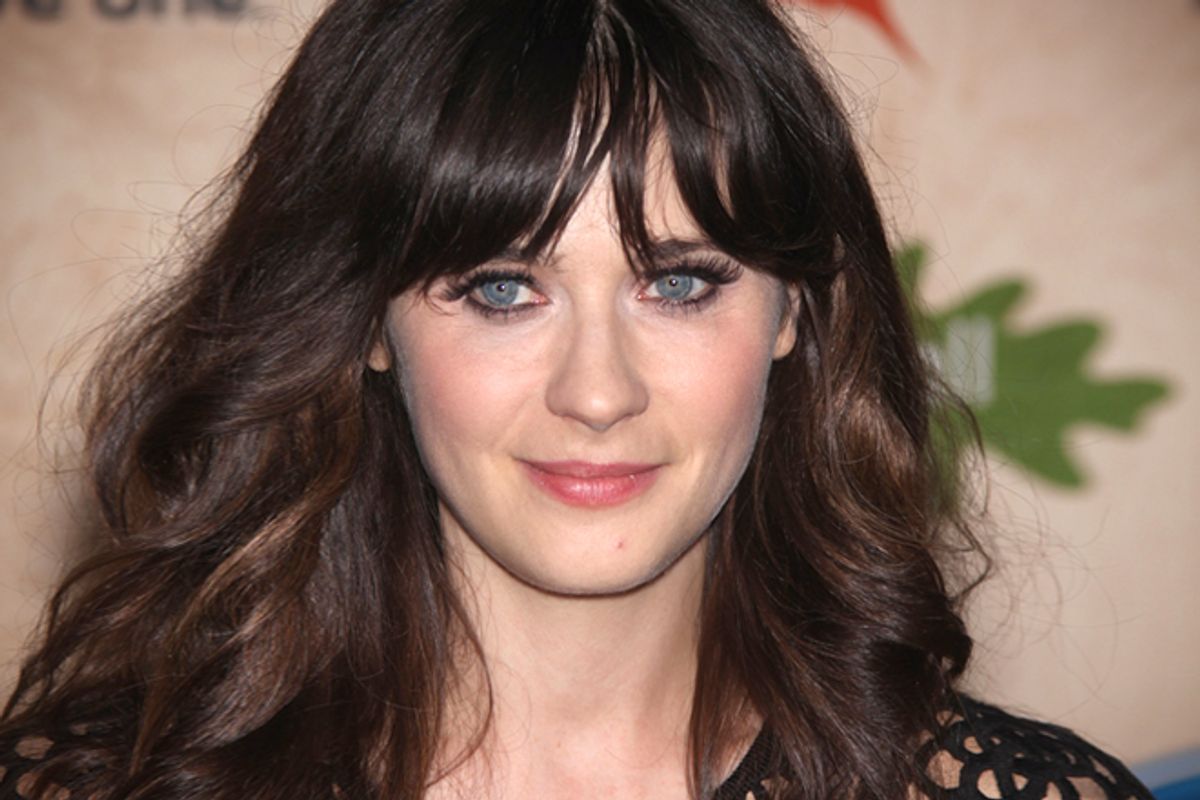 Zooey Deschanel, you make feminism totes adorbs. The star of the self-proclaimed "adorkable" Fox sitcom "New Girl" has in recent years been spiraling into a tailspin of overwrought cuteness, a Lindsay Lohan on a bender of twee. Yet in the new issue of Glamour,  it's that same woman, the one who co-founded a site called Hello Giggles, for God's sake, who unreservedly declares herself a feminist. A f---king feminist, in fact.

In the interview, Deschanel, the doe-eyed, ukulele-playing poster child for Manic Pixie Dreamgirlism, takes charge of a conversation about women, media and image in a way that proves she may look like a fluffy kitten, but she's fierce as a lioness. When asked if she'd one day like to have children, Deschanel shoots down the question by replying, "That is so personal, and it’s my pet peeve when people press you on it. And it’s always women who get asked! Is anybody saying that to George Clooney?" And she has a reply for all the critics who question her sunshine-sweet image: "If you are tearing down somebody who has forged her own path just for wearing a tiara, rethink your priorities. I never stop myself from doing something because I’m afraid of what people might think." ZING.

Deschanel's artful kookiness has, as her star has ascended, threatened to engulf her entire persona – which would be an unfortunately toothless end game for an actress who displayed such edgy mettle in her early films like "Almost Famous" and "The Good Girl." It's also made her a role model to annoying girl-women everywhere. Frankly, whenever I see a grown lady cartwheeling in a public space, I lay at least part of the blame on Deschanel, who has, more than any other female of her generation, made it acceptable for women over 30 to a) wear ruffles and b) cavort through life like it's the ball pit at Ikea.

Yet after an appalling rash of high-profile women, including Marissa Mayer, Carla Bruni, Katy Perry and Melissa Leo apologetically insisting that they refuse to call themselves feminists, it turns out that the kewpie from the sitcom is the one bold and confident enough to announce, "I’m just being myself. There is not an ounce of me that believes any of that crap that they say. We can’t be feminine and be feminists and be successful? I want to be a f--king feminist and wear a f--king Peter Pan collar. So f--king what?"

It's fair to say that we live in a culture in which adult women are encouraged to be sweet, safe and childlike, and that's a problem. It's a problem that strong, successful women are routinely insulted as being "mannish" at one extreme or "slutty" at another. It's a problem that the safest thing a female can be is not too provocative, to present a public image that says, "Don't worry, you don't have to take me seriously." But that's also not the fault of any one woman forging her own glitter-strewn path. Deschanel may ultimately be limiting herself as a performer, but she's not betraying The Cause by prancing around in oversize sunglasses. And unlike so many of her peers, she's not going to play the game of promising the world that all she really wants to be is a mother; she's not going to reassure anybody that it's OK, she's not a feminist. And this is exactly what feminism looks like. It's not frightened or demure; it's unconditional. And it wears a tiara if it wants to.