Season 3 opens with a much-awaited wedding, the arrival of a crass American, and a threat to the estate's future 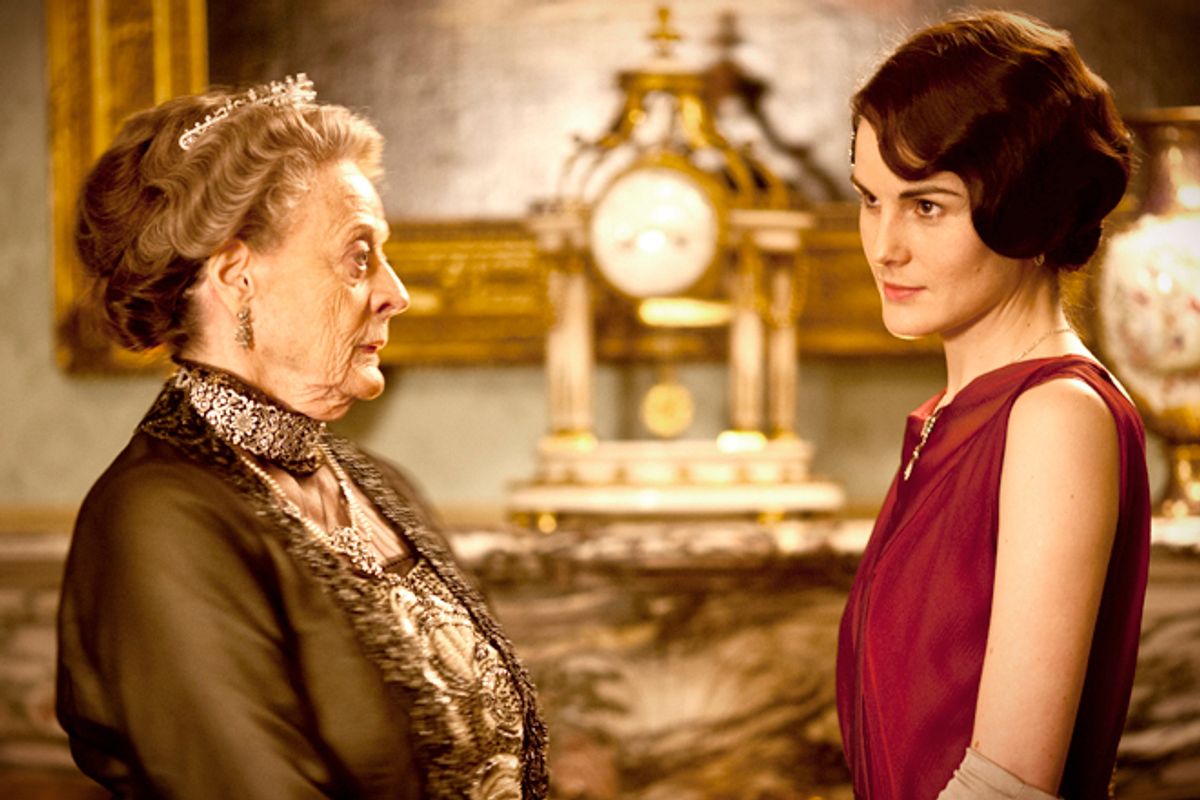 I think I have watched Matthew and Mary get engaged around 40 times. I may be overestimating how much I’ve seen the final scene of last season’s “Downton Abbey,” but if I am, it’s not by much. It’s at the point where not only could I recite the scene from memory (in poncey accents), but I’ve spent a good deal of time wondering why the crackling-snow-underfoot sound effects in it are so damn loud.

In other words, I cannot imagine two hours of television I would be inclined to like more than one focused on Matthew and Mary’s wedding and — praise the gods of high tea — subsequent boffing. I’ve already seen the third season of “Downton Abbey” in its entirety, including the Christmas special, and generally speaking — no spoilers here — this, for me, is the season of “Downton” where the bloom came off the English rose. But that comes later, in future episodes, because in this episode Matthew and Mary got married, and then roll around in bedsheets.

It is a pet peeve of mine — ahem, please, “Bones” — when a show finally gets a couple you’ve been wanting to get together forever together, but then denies you much physical, porny evidence of their coupling, pretending the audience is so high-minded it does not want to see the two make out a lot. Jullian Fellowes may be a snob, but thankfully he is not this kind of snob. (The exchange between Lord Grantham and Matthew about how hot the sex on the honeymoon was —  “My eyes have been opened,” Matthew says — was even kind of gross.)  And so in the second half of last night’s opener, Matthew and Mary lounge about in bed without their clothes on, as eager to practice new tricks as high-schoolers stealing time on an unchaperoned couch.

And before all the smooching, there was Matthew and Mary’s wedding, which was lovely and aww-worthy, and came together in exactly the style of their whole love affair: on and then almost off again thanks to the twosome’s individual flaws — Mary’s tendency to be self-involved and inflexible and Matthew’s to be self-righteous and inflexible — before coming out right in the end. The scene in which the pair reconcile through Mary’s door is perhaps the platonic ideal of a “Downton” scene: gorgeous, romantic, just-not-chaste enough, and oh-so-delicately drawing important character distinctions. It is always Mary who goes into things with her eyes open.

“Downton Abbey” has many charms and many delightful characters, but chief among them for me has always been Matthew and Mary. (Excluded from this list of delightful personages is the banal Bates and, when she is in his company, the otherwise lovely Anna. Over the course of this season’s recaps, I will only ever address this pair under extreme duress, because I hate them. They are tedious and boring and treacly. I know this is irrational — they’re so nice. They are always smiling at each other with their eyes. They mean so well. Barf, barf, barf, barf, barf, zzzzzzzz —  and so I think it’s best for everyone if I give them a wide berth. If you love them, you can love them unharassed by me, and I can keep my cool until Episode 4 or 5, when the really offensive things that are totally unrelated to Bates and Anna start to go down.) But Matthew and Mary, their happy ending and flirty banter, were only a part of this episode. (I especially loved Mary’s response to Matthew’s “I’m looking forward to all sorts of things.” “Don’t make me blush,” she said, looking about as capable of blushing as a bloodless corpse. She didn’t bang the Turk for nothing.)  Their cootchie-coo was enough to make it go down easy, but not enough to obscure the terrible aftertaste of one Martha Levenson.

“Downton Abbey’s” major theme has always been “Change: What is it good for?” with half the characters singing back “absolutely nothing!” and the other half carping about antiquated behavior and stodgy dinner coats and upward mobility before, eventually, giving up on those things to accept the security and largess of the status quo. (“Downton” may give non-traditionalists a voice, but it does not give them victories. See, please, the Dowager Countess’s A-plus dressing down of Branson and his menswear dogma.) But once upon a time, way back in Season 1, the boogeyman of change was as subtle as a brand-new telephone. In Season 3, the boogeyman of change is as unsubtle as innumerable speeches about how terrible change is.

It’s almost as if Fellowes felt the need to answer questions about the importance of “tradition” and a place like Downton that no one who likes the show ever asked. In this episode, we get Lord Grantham and the Dowager explaining how important the estate is for providing jobs like they’re on a debate stage — “The estate must be a major employer, or there is no point, no point to any of it,” says Lord Grantham. “It’s our job to provide employment. An aristocrat with no servants is as much use to the county as a glass hammer,” says the Dowager — and the tacky, brash American Mrs. Levenson going on about the greatness of change, as appealing and believable on the subject as the smarmiest used car salesman is about the quality of one of his cars.

I have to focus a lot on the greatness of Mary’s pitch-perfect meltdown — “God, Matthew, how can you be so disappointing?!" — to get over what an unforgivable hash "Downton" made of the Martha character and of Shirley MacLaine. MacLaine's performance is something like failed camp. Even successful camp wouldn’t have much place in “Downton,” a show whose major strength is the restrained realism of its actors, but unsuccessful camp has no place anywhere. MacLaine only served to show how great Maggie Smith is as the Dowager Countess. (And we needed reminding. The Dowager’s dialogue is off its peak a bit. Instead of “What is a weekend?” there is a much more tortured joke about new-fangled cocktails.)

The real shame of MacLaine’s performance is that it tips the balance of power in the argument between tradition and change toward tradition, in ways well beyond what is written. In this episode, after all, Mary talks crassly about how her grandmother “is made of money” and she and the Dowager sniff around Martha’s fortune because, as Cora puts it, they can’t bear to live in a smaller house. Martha, meanwhile, has a point: She, unlike two generations of Granthams, has been able to take care of her money, and she can throw a fun picnic. But because of the paucity of MacLaine’s performance, and the fact that she has to say junk like, “Are there still forbidden subjects in 1920, I can't believe this?” while shoveling food in her mouth, Carson’s closing point carries the day: Style still matters. And Mary, the Dowager Countess, Lord Grantham and the actors who play them have style that far exceeds that of Martha and MacLaine in this role.

The other major proponent of change is, as ever, Tom Branson, who is so forward-thinking he gets roofied, like he’s actually a character on “Law & Order.” Last year, Tom exhibited a horrid know-it-all-ness toward his true love Sybil, constantly explaining that he knew her mind before she did, a little romantic, a lot condescending. This tendency was again on display this episode. After spending all of dinner fighting with her family about Ireland and the future, he tells her, “Don’t disappoint me, Sybil, not now that we’re here.” Cuts both ways, Tommy boy! We’ll see if “Downton” knows how to take a forward-thinking young man, and turn him into a traditionalist.

Before leaving you till next week — when I promise to investigate the goings-on downstairs; Daisy and her sulks were my second favorite thing about this episode other than the Matthew and Mary of it all — I would like to just mention Edith, poor Edith, so poor Edith even her mother isn’t above snarking, “Never mind about Edith,” behind her back. I would like to call particular attention to the scene right before Mary’s wedding when Mary, Cora, Sybil, Edith and Anna are all gathered in Mary’s room, and Cora begins to talk about sex. After a little hemming and hawing, Cora gigglingly tells her daughter, “When two people love each other, you understand, everything is the most terrific fun.” Edith is, at this moment, the only virgin in the room. She must have wanted to fall through the floor. May this, if nothing else, be the thing that changes at Downton Abbey before the season's through.