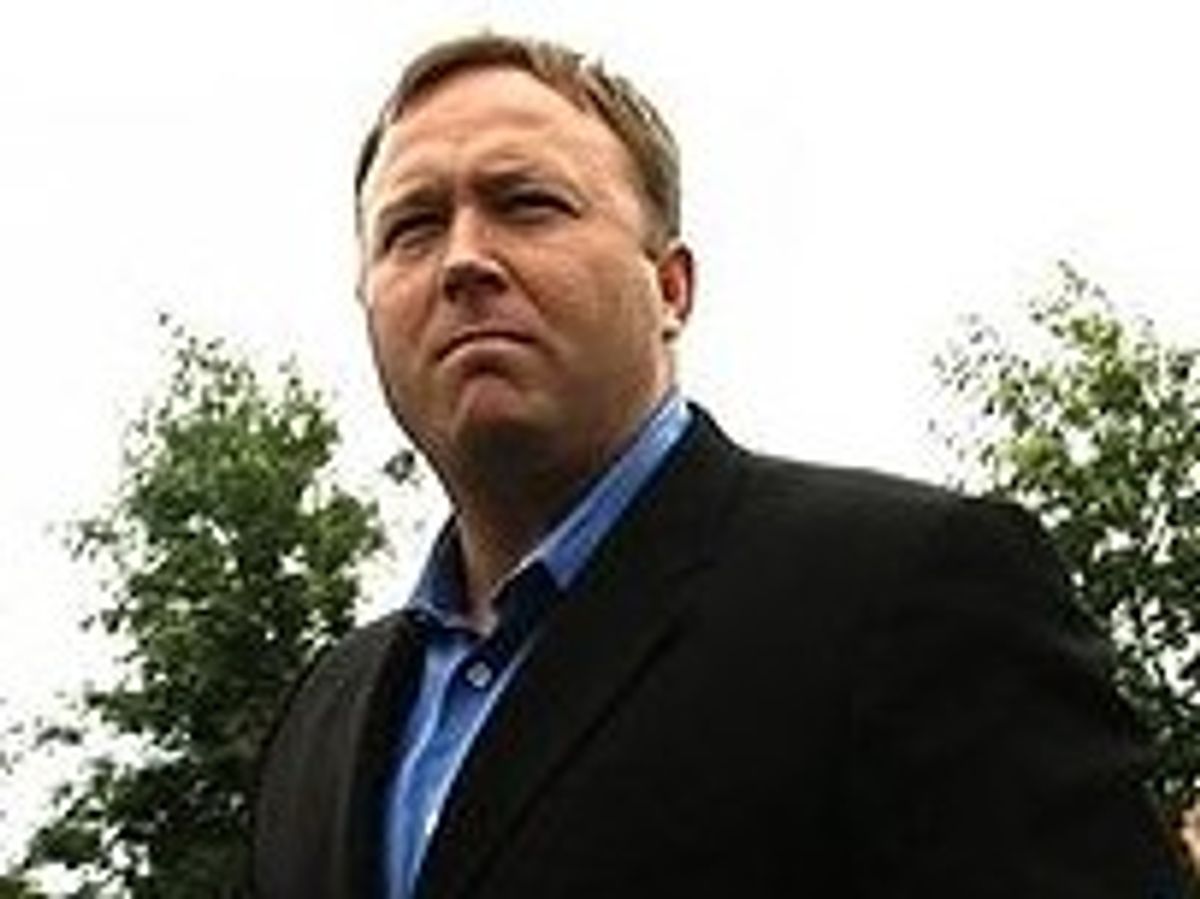 The Daily Mail reports that punchy conspiracy theorist Alex Jones was detained at the airport on the way to his appearance on Piers Morgan.

According to the Jones-led site InfoWars, Jones was passing through security at Austin-Bergstrom airport on Monday when the trouble began.

One of the site’s writers explained that as Jones approached the screening area, a TSA agent addressed him as ‘Mr Jones.’ After that, Jones was immediately requested to remove his shoes.

Jones was quick to point out that no one else in the area was being asked to do the same. At that point, a police officer approached Jones and said that he would arrest him if the radio host failed to remove his footwear.

InfoWars writes: ‘Not even giving Jones the option to leave the airport, the cop continued with threats to arrest Jones and prevent him from flying as the radio host threatened to file a lawsuit for civil rights violations.’

Why didn't he want to take off his booties. Would they be drugged with SSRI's? Bugged by the illuminati? According to InfoWars his reasoning was more mundane:

One of Jones’ primary concerns regarding the removal of shoes was the fact that he had caught athletes foot from that very process in another airport years previously, meaning that he now carries a spare pair of socks to change into when he boards the aircraft. Jones emphasized that he was not a “clean freak” but that he never encountered such issues before having to take his shoes off at TSA security.

If you were watching Alabama put a hurting on Notre Dame tonight, you might have missed the evening's other best clash. On his CNN show, Piers Morgan hosted Alex Jones, the radio host, Second Amendment ideologue, and one of the people behind the petition to Deport Piers Morgan.

It was as insane as you might imagine, as Jones baited Morgan about a hacking scandal at the British newspaper he edited, invoked the New World Order, challenged Morgan to a boxing match, and suggested it would be 1776 all over again if the government tried to take guns away from citizens.

RealClearPolitics has more of a transcript, but here are five of Jones' craziest highlights.

1. Bloomberg, AP, Reuters, you name it -- brag that they're going to get our guns as well. They've taken everybody's guns, but the Swiss and the American people and when they get our guns, they can have their world tyranny while the government buys 1.6 billion bullets, armored vehicles, tanks, helicopters, predator drones, armed now in U.S. skies, being used to arrest people in North Dakota.

2. The Second Amendment isn't there for duck hunting. It's there to protect us from tyrannical government and street thugs.

3. True, we have a higher gun violence level, but overall, muggings, stabbing, deaths -- those men raped that woman to India to death with an iron rod four feet long. You can't ban the iron rods. ...  I'm here to tell you, 1776 will commence again if you try to take our firearms! It doesn't matter how many lemmings you get out there in the street begging for them to have their guns taken. We will not relinquish them. Do you understand?

4. You have hoards of people burning down cities and beating old women's brains out out everyday. They arrest people in England if they defend themselves, that's on record. My God, you have a total police state. Everybody is fleeing the country because -- you've had to flee, bud. Yeah, you fled here. Why don't you go back and face the charges for the hacking scandal?

5. Why did you get fired from the Daily Mirror for putting out fake stories? You're a hatchet man of the New World Order. ... You think you're a tough guy? Have me back with a boxing ring and I'll wear red, white, and blue, and you'll wear your Jolly Roger.