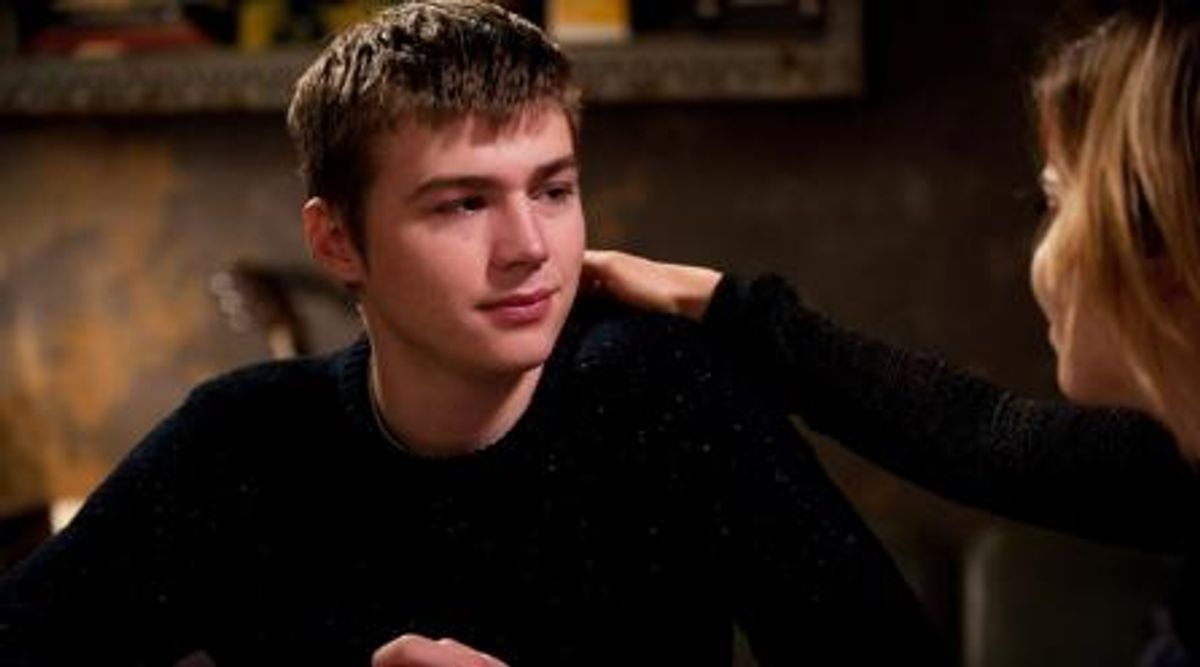 Because they happen with such rarity, I feel obliged to take note when they do: There was an abortion on prime-time television last night. On “Parenthood,” shy, quiet high-schooler Drew and his increasingly manly eyebrows found out that his girlfriend Amy was pregnant. Amy decided to have an abortion, Drew decided to be supportive even though a part of him, he tearfully confessed to his sister, wanted to keep it. Amy went through with her plan and the episode ended with Drew sobbing in his mother’s arms. It was all very quiet and understated — no histrionics, no one had a last-minute change of heart. (Bill O'Reilly, who fulminated that "the consequences were not shown" when the Drew and Amy first had sex, many episodes ago, can now fulminate about those consequences.)

A few years ago, one of the teenage characters on "Friday Night Lights" — a show also overseen by Jason Katims, "Parenthood's" showrunner — had an abortion. Becky was one of the "FNL's" central personalities, as was the high-schooler who impregnated her (the character Luke Cafferty, now appearing on “Parenthood” as Amber’s recent ex-boyfriend and ex-GI Ryan). That episode of “Friday Night Lights,” was much closer to the perspective of the pregnant girl. (And there was fallout, brought about bu Luke's mother, a devout Evangelical, who vilified principal Tami Taylor for counseling Becky, and sought to have her fired.)

On last night's “Parenthood,” we only saw of Amy exactly what Drew did: that she was upset, rattled, convinced it would totally destroy her life, and a little uncomfortable around Drew, from whom she was pulling away. But even with that distance, Drew was the sweetheart we have come to know him to be: He went with Amy to the doctor (a Planned Parenthood that very clearly informed the teens of all of their options, including keeping the baby and adoption), he said all the right things, he checked his own anxiety and fears and tried not to lay them on her. Perhaps if there were more abortions on television, the fact that Drew instinctively wanted to keep the baby — something that I think is in his nature, given how much believes he wants to spend his whole life with Amy — would have seemed just like a character beat, and not like a minor sop to pro-lifers. (Though, to be fair, pro-lifers probably didn’t make it that far into the episode.)

The Drew storyline came in an episode where a bunch of the members of “Parenthood’s” younger generation were revealed to have inner lives totally mysterious to their parents. (See: Victor’s willingness to call the cops on Julia and Joel; Max’s pubescent body and sweet not-ready-to-talk-sex with his dad moment.) Drew’s mother Sarah checked in on him, tipped off that something was wrong, and he pretended he was just stressed about college. She did her motherly duty, but if this were a less emo show, Drew might not have ended up in her arm’s sobbing, he might just have sat with the weight of Amy’s pregnancy all by himself. "Parenthood" was brave enough to take on abortion, but not needing one's family, well, that's a particularly stark possibility "Parenthood" just doesn't deal in.