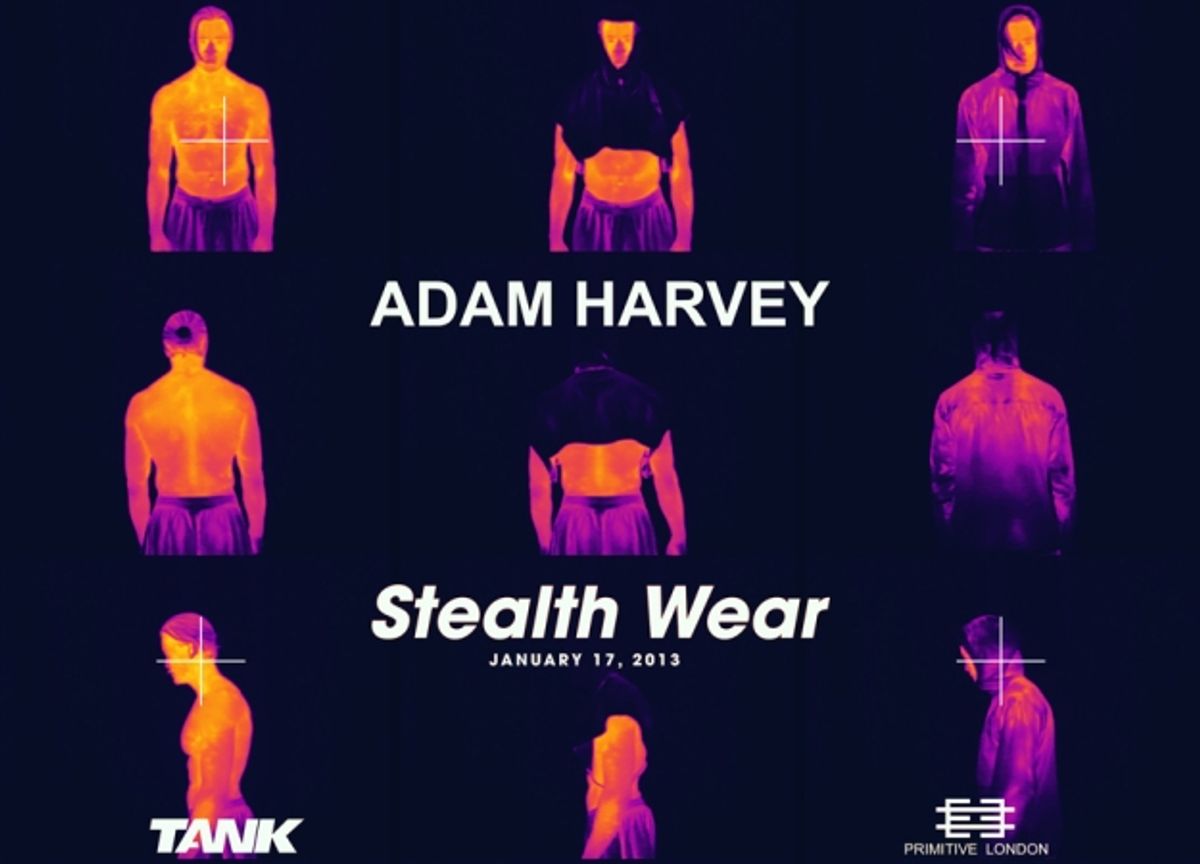 Poster for the Stealth Wear exhibition
--

Technological innovations tend to solidify our current surveillance society, but a new development in high-tech fashion seems like a rare example of resistance. New York artist Adam Harvey has developed a prototype line of "stealth wear," clothing that employs both design and materials to shield the wearer from detection and recognition by surveillance technologies.

"The anti-drone hoodie and scarf hide you from thermal imaging, the XX-shirt protects your heart from x-ray radiation, and an accessory called Off Pocket can instantly black out your phone signal," noted a release about the four-piece clothing line, which will be showcased in a London exhibition this month.

This is not Harvey's first foray into counter-surveillance camouflage. For his masters' thesis at NYU he developed "CV Dazzle," a form of "expressive interference that takes the form of makeup and hair styling (or other modifications)" which functions to deflect facial recognition systems. He explains on his website:

The name is derived from CV, a common abbreviation for computer vision, and Dazzle a type of camouflage used during WWI. Dazzle camouflage was originally used to break apart the gestalt image of warships, making it hard to discern their directionality, size, and orientation. Likewise, the goal of CV Dazzle is to break apart the gestalt of a face, or object, and make it undetectable to computer vision algorithms, in particular face detection.

His new clothing line was developed as a response to the swift proliferation of domestic surveillance drones. In an interview with Rhizome magazine, the artist explained, "I think building privacy into modern garments can make them feel more comfortable and, like armor, more protected. Data and privacy are increasingly valuable personal assets and it doesn’t make sense to not protect them."

Interestingly, the inclusion of a design element in "stealth wear" that immediately blacks out phone signal was, for Harvey, about more than protecting the wearer from surveillance through phone GPS systems. It was as much about how we, as online subjects, actively enter into and constitute surveillance society. "When I first modified my pants with signal attenuating fabric, it felt odd to be unplugged. It was as if I had blocked out part of the world, covered my ears, or closed my eyes. But then I adjusted and realized that I had just opened them again," the artist explained.

I asked well-known livestreamer, independent journalist and robotics technician Tim Pool via Twitter what he thought of "stealth wear." He responded that it seemed like a "gimmick," but "not totally useless" -- which, in the face of near totalized surveillance, seems worth exploring.