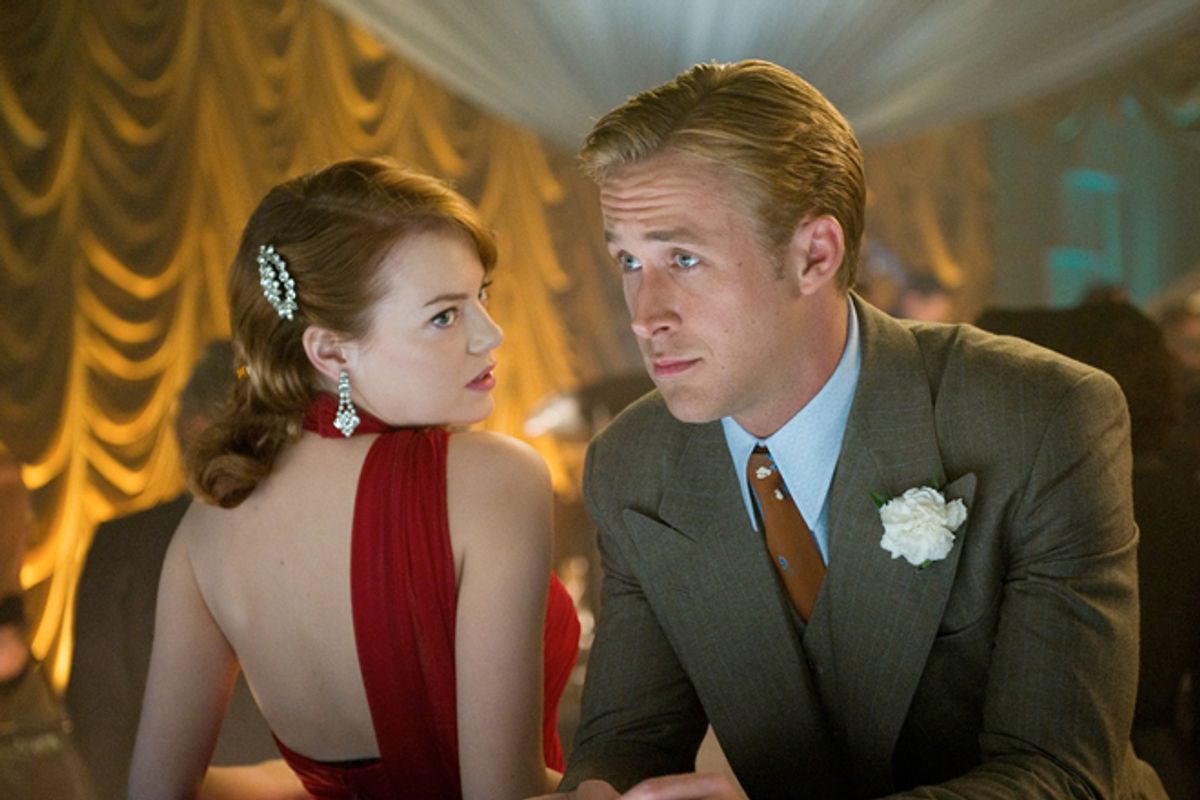 If you view Ruben Fleischer’s “Gangster Squad” as a violent period crime thriller in a familiar dress-up vein – as a capable imitation of better movies by Martin Scorsese, Brian DePalma and Roman Polanski – it’s reasonably successful entertainment. It’s got overacting from Sean Penn, beneath a ton of makeup, as legendary Los Angeles mob boss Mickey Cohen, along with underacting from Ryan Gosling as the slightly nebbishy romantic lead and down-the-middle acting from Josh Brolin as its upright cop hero. Add in the digitally re-created, noir-flavored locations of postwar L.A. and the dazzling eye candy of Emma Stone in terrific period dresses and heartbreaking auburn hair and, hey – by the standards of midwinter Hollywood releases, not bad at all.

But let’s back up for a second and talk about propaganda and how it really works. I’d like to declare a temporary truce around the issue of “Zero Dark Thirty” and its depiction of torture, at least long enough for us to agree that the question of whether or not the film is propagandistic is now a matter of extensive public discourse. Nearly no one will raise such questions about “Gangster Squad,” because it does not depict recent history and because it’s a conspicuously artificial Hollywood entertainment released in January. One could argue, however, that those things make it more effective as propaganda than an overtly disturbing film like “Zero Dark Thirty” could ever hope to be, since the message delivery is almost invisible.

What message do I discern beneath the snazzy fedoras, Italianate villas and Latin-jazz supper-club numbers? Or the ultraviolent concluding shootout that rips off everything from “The Untouchables” to “Bonnie and Clyde” to “Dirty Harry” to various other things I didn’t bother to identify? A complete whitewashing of one of the most vicious and racist paramilitary organizations in American history: the Los Angeles Police Department.

“Gangster Squad” is a heavily fictionalized account of longtime LAPD chief William H. Parker’s campaign to prevent Mickey Cohen and other mobsters with East Coast roots from gaining power in Los Angeles. While the movie plays fast and loose with the facts about Cohen and Parker in all kinds of ways, it accurately portrays Parker (played by Nick Nolte in the film) as urging his favored cops to go beyond the law into vigilantism when they deemed it necessary. Sgt. John O’Mara (Brolin), Sgt. Jerry Wooters (Gosling) and the other untouchables of the “gangster squad” are of course presented as heroes, who embark on an extralegal campaign of surveillance, brutality and murder to save their city during an unprecedented emergency.

That was, of course, precisely the rationale proposed by Dick Cheney and other leaders of the Bush administration in defending the torture seen in the opening scenes of “Zero Dark Thirty” — the torture that has since been swept under the rug by the Obama administration so that we won’t ask questions about its own human rights record. In both cases, the motivations that lie behind the visible actions are complicated. If Bush and Cheney were trying to establish a near-absolute form of executive power, which Obama has embraced and broadened, William Parker was trying to preserve the predominantly white Protestant power structure of postwar L.A. against Eastern intruders with immigrant Catholic or Jewish roots.

“Gangster Squad” adds a faint patina of 21st-century political correctness to the proceedings by adding one African-American cop (Anthony Mackie) and one Latino cop (Michael Peña) to O’Mara’s secret elite team. Not only is this wildly unlikely in the context of 1940s Los Angeles, which had a near-Jim Crow level of segregation, it flies in the face of Parker and the LAPD’s long and poisonous relationship with the black and Latino communities. Parker is said to have originated the term “the thin blue line,” and was among the first police chiefs to take cops off the streets of his sprawling city and transform them into a military-style rapid-response team in juiced-up patrol cars. Even an elementary grasp of L.A. history, or its great tradition of crime fiction, makes clear which neighborhoods the thin blue line was meant to protect, and which ones – on the eastern and southern fringes of the city – it was meant to contain.

Many superior films about the murkier eras of L.A.’s past, most prominently “Chinatown” and “L.A. Confidential,” have been profoundly shaped by an awareness of the darkness beneath the California dream. On the surface, “Gangster Squad” is simply a trivial entertainment that doesn’t care (Fleischer’s previous films are the comedies “Zombieland” and “30 Minutes or Less”), but beyond that it paints a fundamentally mendacious portrait. Will Beall’s screenplay (based, to a very limited extent, on a book by Paul Lieberman) posits a lot of ludicrous patriotic conversation, in which cops stand around at backyard barbecues exclaiming that, by God, they fought Hitler for American freedom and they’ll be damned if they let Mickey Cohen take it away again.

In order to justify the endless litany of crimes committed by police officers in this movie, Penn’s rubber-faced Cohen is depicted as a soulless mini-Stalin who has visiting wise guys physically ripped apart by automobiles and his own underlings murdered with power drills. As J. Hoberman observes, the real Cohen was nothing like that. A shrewd political calculator and sharp dresser who reportedly did not smoke or drink and held progressive racial views, Cohen endured as a force in L.A. society long after his fictional demise in this movie. Whether he or William Parker was worse for Los Angeles, in the long arc of history, is very much up for debate; whether “Gangster Squad” is lazy and mendacious soft propaganda is not.