How not to defend yourself against the "chauvinism" charge, starring Morning Joe

Today, Joe Scarborough yelled at Mika Brzezinski until she apologized for getting annoyed with his snide sexism 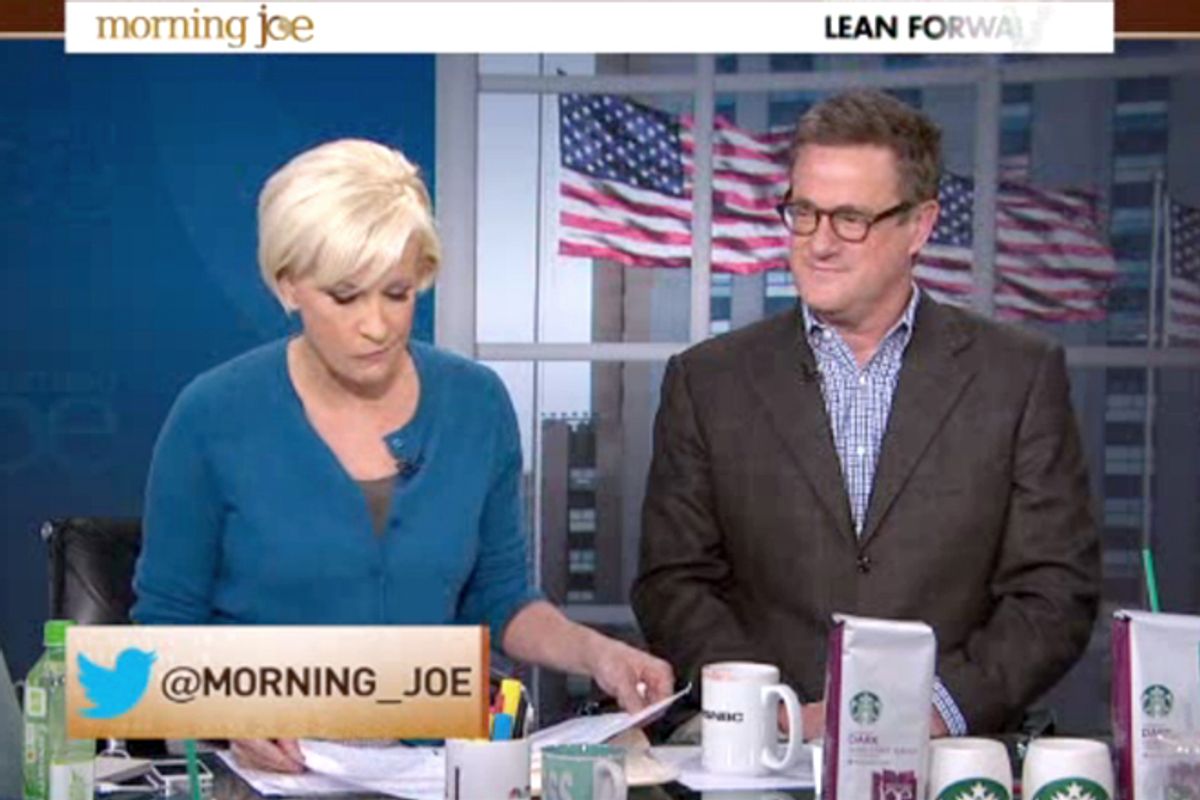 As best as I can tell, here is what happened on "Morning Joe" this morning. Wacky jokester morning show host and respected American political figure Joe Scarborough mocked and belittled his co-host, Mika Brzezinski, until she became genuinely upset with him, then he angrily yelled at her for being upset with him until, finally, he got her to apologize to him for calling him on his bullshit.

Brzezinski was defending Obama from complaints that his Cabinet is too male. Scarborough was responding to her comments with snide jokes, including one about the Lily Ledbetter Act. Brzezinski told Scarborough that he was "being chauvinistic right now," and Scarborough responded with outrage. Soon he was -- for real -- snapping his fingers to get her to shut up and listen to him berate her.

"Knowing me and seeing me work around here for five years, you want to call me a chauvinist on television?” Scarborough asked Brzezinski. The answer to that question, as anyone who's watched Scarborough and Brzezinski work together on television for five years could tell you, is an unequivocal "yes." One of the running jokes on "Morning Joe" is that "Morning Joe" constantly talks over and generally disrespects his co-host, who also happens to make half his salary.

Eventually, Brzezinski apologized for being mean to poor Joe.

My only question is, is Joe Scarborough actually different from Greg Gutfeld? They both do the smirky frat-misogynist who is Allowed To Say That Because He Is "Just Kidding Around" thing for a living. I guess there is the fact that Gutfeld seems to be aware of the fact that he's an unpleasant character, while Scarborough imagines himself a serious and important person. Also Gutfeld's show gets much better ratings. (His 5 p.m. show, not his 3 a.m. show.) Other than that, though, they seem like a couple of guys who'd really get along well.