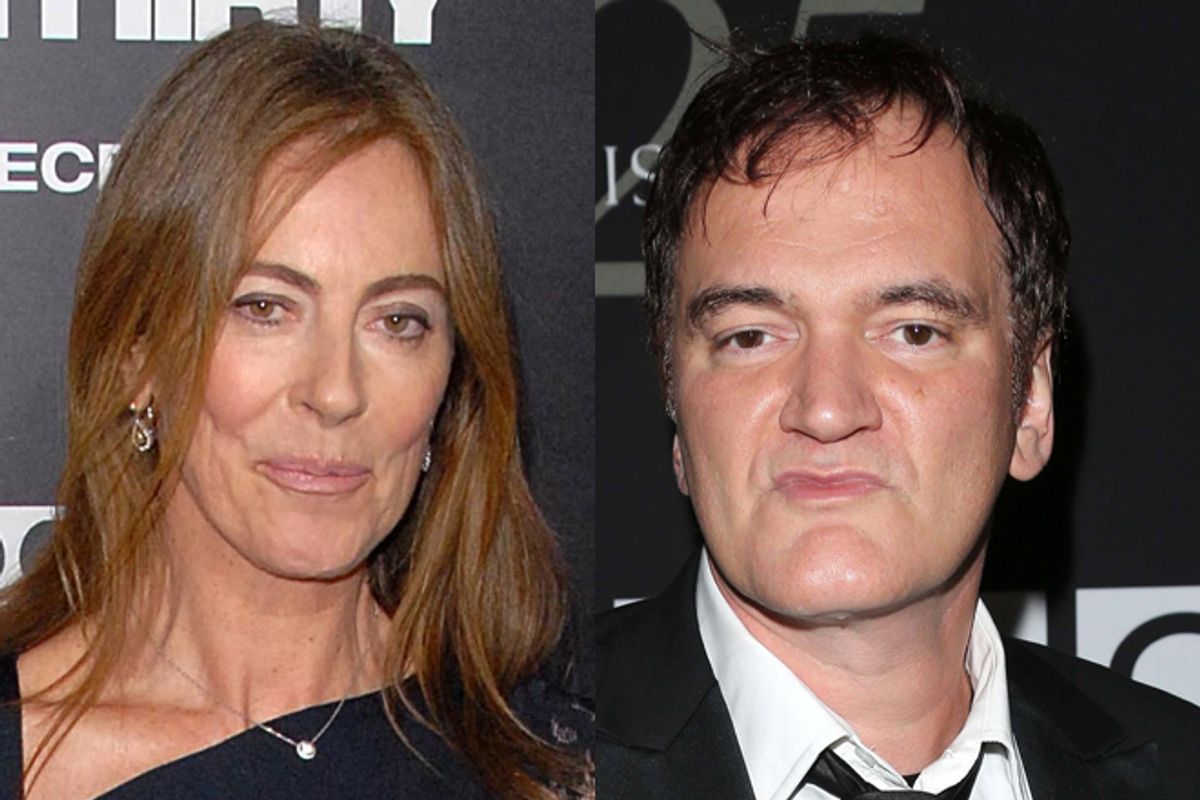 On one hand, it sure looks as if Hollywood is getting skittish about “Zero Dark Thirty” and the continuing political controversy around its portrayal of torture and links to the CIA. As expected, the film was among the nine best-picture nominees in Thursday morning’s Academy announcements. But Kathryn Bigelow was denied a best-director nomination in a category many (myself included) thought she might well win.

If Bigelow’s omission was the biggest surprise of this morning’s announcements, it wasn’t the only one. Ben Affleck was denied a directing nomination for his Iran-hostage drama “Argo,” and Tom Hooper, who won the directing prize two years ago for “The King’s Speech,” was similarly rejected for “Les Misérables.” Also missing from the directing category was Quentin Tarantino of the bloody slave-revenge western “Django Unchained,” but that’s arguably less of a surprise given the academy's traditional allergy to any and all material tinged with racial controversy. (Consider the fate of "The Help" in last year's Oscar season.) All three films were nominated within the promiscuous best-picture category, but are now far less likely to be regarded as serious contenders.

But we can also choose to view what happened this morning as an embrace rather than a set of rejections. Once again the academy has skewed in a more adventurous and indie-friendly direction than most observers expected. Both the riveting old-age drama “Amour” and the magical-realist bayou allegory “Beasts of the Southern Wild” were nominated for best picture, and their creators – severe Austrian genius Michael Haneke and first-time New Orleans filmmaker Benh Zeitlin – were both nominated for best director. If the first outcome is not an enormous surprise, the second one definitely is. Personally, I never imagined I’d see the Oscars honor Haneke, one of the most rigorous and demanding cinema artists of our time, and I’ll gladly trade Bigelow, Affleck and anybody else for that.

This year’s Oscar nominations also feature the oldest best-actress nominee in history (Emmanuelle Riva of “Amour,” who is 85) and the youngest (Quvenzhané Wallis of “Beasts,” who is now 9 – but was 6 when most of the film was shot). Neither is likely to win, in a category that’s expected to be a close race between Jennifer Lawrence of “Silver Linings Playbook” and Jessica Chastain of “Zero Dark Thirty.” Similarly, every man nominated in the best-actor category who isn’t named Daniel Day-Lewis – for the record, they were Bradley Cooper, Hugh Jackman, Joaquin Phoenix and Denzel Washington -- is likely to remain an afterthought.

If we assume that neither “Beasts” nor “Amour” is a likely best-picture winner, and further assume that the directing category offers the best guide to what will actually win (as is usually the case), then this year’s Oscar race sets up as a three-way battle between “Lincoln,” Ang Lee’s 3-D CGI fantasy “Life of Pi” (which garnered 11 nominations overall), and David O. Russell’s realist rom-com “Silver Linings Playbook,” which was nominated in every major category. To put it mildly, “Lincoln” is the overwhelming favorite. I wouldn’t be surprised to see Day-Lewis, Steven Spielberg, writer Tony Kushner, supporting actor Tommy Lee Jones and the film itself sweep the big awards on Oscar night. (Sally Field is perhaps an underdog for supporting actress, given the consensus that Anne Hathaway's rendition of "I Dreamed a Dream" in "Les Miz" has guaranteed her a statuette.)

If there were no other snubs as notable as those of Bigelow, Tarantino and Affleck, there were plenty of other big names and prominent films that went unmentioned. Wes Anderson’s gorgeous and charming “Moonrise Kingdom” was denied any major nominations, which is really too bad. Many people thought that John Hawkes would be nominated for his role as a severly disabled man seeking to lose his virginity in “The Sessions,” but the mild-mannered film underperformed at the box office. Previous best-actress winner Marion Cotillard probably deserved a nomination for her role in Jacques Audiard’s “Rust and Bone” – but perhaps “Amour” was enough French film for this year.

Leonardo DiCaprio got no supporting nod for his role as a nefarious slaveowner in “Django Unchained,” and Matthew McConaughey – recently honored by the New York Film Critics Circle for his winning role as captain to a team of male strippers in “Magic Mike” – also found no love from Oscar. There was a last-minute push to get a best-picture slot for “Skyfall,” which is the highest-grossing James Bond film of all time, in a year when the academy plans a special presentation to honor the long-running franchise. But even with only nine of the potential 10 nominations filled, it didn’t happen.