Pithy takeaways and observations from the best shows this week 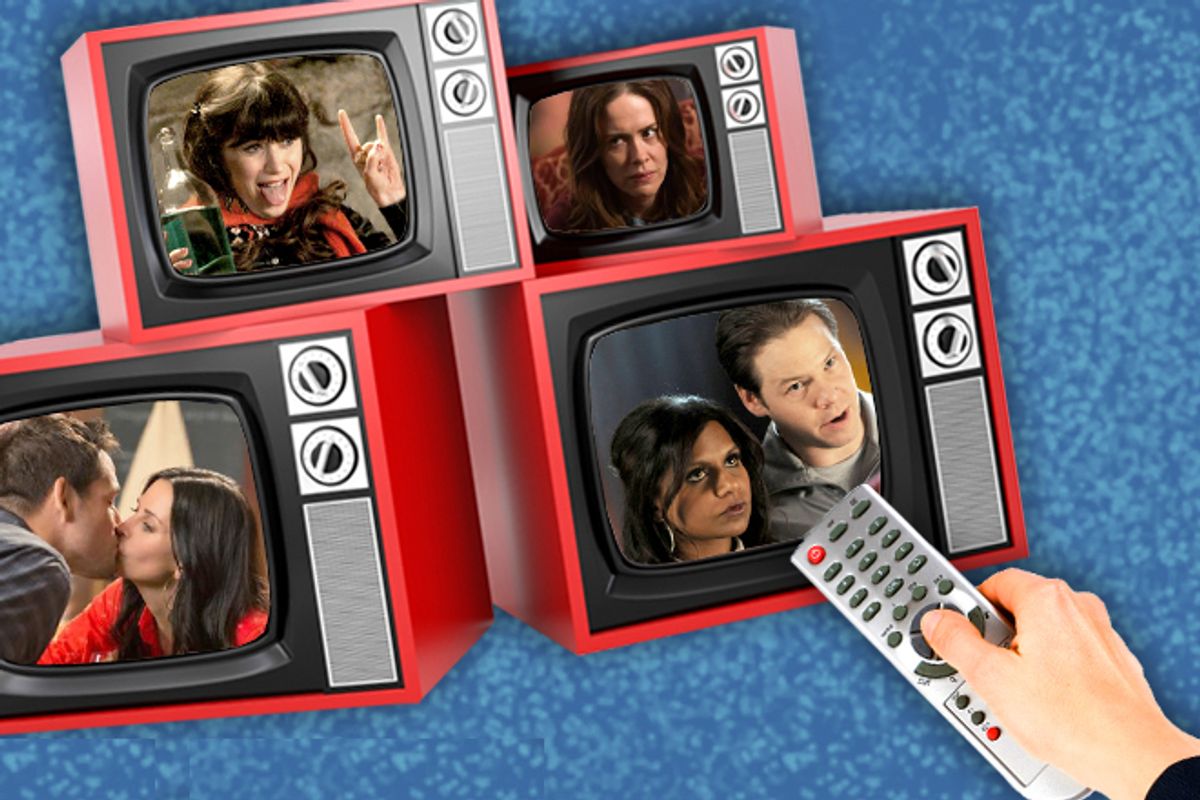 My observations of the past week of TV that are too short to stand on their own and too long to keep to myself.

1.  It’s often weird how all the shows that air on a specific night seem to be in conversation, as if the writers of every show that broadcasts on Thursday had a secret conversation about making "Treme" jokes all at once. This past Tuesday was identity politics nights over on “New Girl,” “The Mindy Project,” and “Happy Endings”: Schmidt tried to get Winston to share his “blackness” with his housemates, Mindy’s Indian little brother flirted with quitting Stanford to be a rapper, and on “Happy Endings” Max went on a quest to find his particular gay subculture. “New Girl” and “Happy Endings” did a nice — by which I mean funny — job with both of those stories. (Schmidt’s pronunciation of “crack kuh-caine” was wonderful; Winston as the straight-but-not-boring man, finally, really worked; and “Happy Endings'” creation of “optimistic red velvet walruses” was so sweet and funny, I will ignore the fact that Max is pretty much just a bear.) But I found the rapping on “The Mindy Project” to be so distracting I can barely tell if that story line worked. It wasn’t terrible, but it wasn’t good. Was it supposed to be good? If it wasn't supposed to be good, why did we see so much of it? If it was bad, why didn't the show say so? The rapping was kind of like the character of Mindy herself: The show doesn’t know yet whether it wants you to like her or dislike-her-while-thinking-she’s-funny and it keeps trying to have it both ways.

2. Just about every week I find myself having intense physical reactions to something I see on-screen: I don't just cry, I whoop and cheer and smile or yell or hector someone about not to do that really dumb thing they’re about to do. (So, yes, basically, I talk to my television a lot.)  My most felt moment of this week came courtesy of “American Horror Story,” as Sarah Paulson’s Lana Winters tried to walk out of the asylum, but had to make it past serial killer Dr. Threadson to do so, something I wanted to happen so badly I was gesturing wildly at the TV to make it so, urging Lana to go the distance like she was a potential home-run ball. The end of that sequence, with Lana in a taxicab, in safety, giving Threadson the finger, is, for me, the best flip-off in TV history. 3. One of the frustrating things about “Nashville” is that from the moment it started, we've known where certain story lines have to go and it is taking forever to get there. Rayna and Juliet were going to work together (they finally are), Gunnar and Scarlett were going to get romantic (he’s finally trying), Rayna and Deacon were going to sleep together again (that can’t happen soon enough). The problem isn’t that all these things so obviously needed to happen, it’s just that the longer we wait for them to happen, the more the show feels like it's dawdling, keeping us from the more mysterious, more surprising moments that will happen during and after. So I was very happy to see “Nashville” do a really smart thing this week with one similarly structured story. Since the first episode, it’s been hinted that Rayna’s husband Teddy is not her oldest daughter’s biological father (presumably Deacon is). That finally came up again, and for a minute it looked like Rayna’s father was going to be able to blackmail her with this secret — but, awesomely, Teddy already knew about the paternity, and always had. It was a nice narrative jolt, one that gets the show, and the audience, out of yet another seemingly pre-ordained plot (Teddy finding out) and keeps Rayna’s morality intact (she's not so selfish that she would keep that kind of secret).

4. Now for your regularly scheduled “Scandal” update: Last night the show took on torture (!!!). Huck, the damaged but good-guy Black Ops assassin who was framed for attempting to assassinate the president, was taken into custody and tortured (water-boarded, beaten, the whole thing) at the behest of the vice-president, in the hopes he would confess. He didn’t. (Olivia Pope kept saying Huck would rather die than confess to a crime he didn’t commit, even though this sort of false confession is exactly what torture makes people do.) Olivia somehow sprung Huck from his torture chamber, so he could go find the woman who actually tried to assassinate the president (who had been hired by the oil mogul who helped steal the presidency for the president in the first place). He did. One can only imagine what comes next week.

5. “Cougar Town” began on a new season on its new home, TBS, this week. I found the first episode to be surprisingly unfunny (I’ve really liked “Cougar Town” in the past), but I did want to applaud the show, again, for it's bizarro brashness about alcohol. The very first scene in its very first episode on a new channel was, again, all about the characters on the show’s deep love, thirst and probable addiction to wine. I remain impressed by how little "Cougar Town" seems to care that its loving and fancy-free portrayal of alcohol abuse may be off-putting to some.