Will justice finally be served for Jimmy Savile's victims?

Police issue a damning report on an "unprecedented" sexual abuser. Is this enough for his victims? 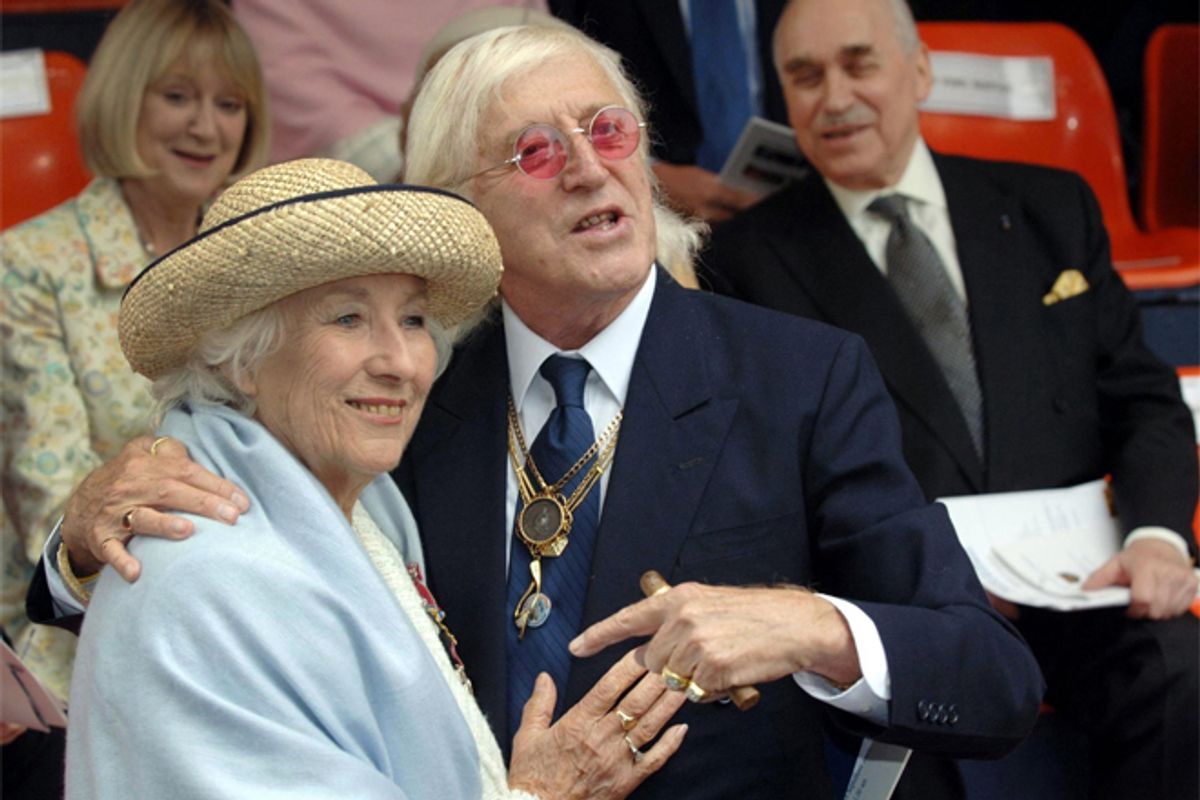 Jimmy Savile and British singer Vera Lynne at the unveiling of a contemporary sculpture at Victoria Embankment in central London, Sept. 18, 2005. (Matthew Fearn)
--

British entertainer Jimmy Savile was a singularly appalling monster. The world knows this now. But is that enough justice for his victims?

When the television and radio presenter died at age 84 in 2011, he was widely regarded as a beloved icon, a man with an OBE and a knighthood. But generations of men and women who'd crossed paths with him in their childhoods held a different image. Last fall, ITV aired the searing documentary "Exposure: The Other Side of Jimmy Savile," a detailed investigation into years of predatory behavior – behavior that Savile's position as a children's entertainer gave him all but free rein to indulge in. And, along with the revelations of his victims, there was clear message that his actions were no secret.

"Exposure" told the tale of five women who claimed Savile had molested them when they were in their teens. The show unleashed a torrent of other victims who've come forward since. Police have put the number of accusers at 450, but the eventual one may rise closer to 600.

The Savile case has become a massive criminal investigation and an escalating embarrassment for the BBC, which was not only Savile's home but just last fall was accused of spiking a 2011 "Newsnight" investigation into the long-simmering rumors about Savile's behavior.

After a three-month police investigation, a report issued on Friday, titled "Giving Victims a Voice," depicts a man with a "vast, predatory and opportunistic" track record with victims as young as 8 – one his country's justice system failed repeatedly to stop. It's a scathing, shocking account of over 50 years of sex crimes: "214 offenses, including 34 rapes," mostly girls, mostly underage, though little boys and grown women were not immune. The report concludes Savile "was one of the U.K.’s most prolific known sexual predators," one whose crimes are "unprecedented in the U.K."

Yet Savile went to his grave not in the jail cell he richly deserved, but as a happy old man, just shy of 85, a man whose funeral was attended by thousands and whose legacy was "affectionately" feted by the network that had been his home. And now, the nation is figuring out what to do about those he left behind, the lives he cavalierly played with. That's why the report acknowledges that "as Jimmy Savile is dead there can be no criminal prosecutions against him and the testimony of his victims cannot be challenged in the courts. However it is this lack of criminal proceedings — and justice for victims — that has contributed to the MPS and NSPCC view that the information contained in our joint report should be put into the public domain." And it continues, "This is why the report is entitled Giving Victims a Voice - we hope that those who suffered as a result of Jimmy Savile's actions can take some comfort that information based on their accounts is being published … We are therefore referring to [the accusers] as 'victims' rather than 'complainants' and are not presenting the evidence they have provided as unproven allegations. For a variety of reasons the vast majority of his victims did not feel they could speak out and it’s apparent that some of the small number who did had their accounts dismissed by those in authority including parents and carers."

Compared to what he did, and did for such an appallingly long time, to hundreds of individuals, it's a slight recompense. But it's more than his victims ever had before. It's recognition that what happened to them was real and it was wrong, no matter who turned a blind eye or covered it up to maintain the fiction of a lovable star at the time. In the meantime, police investigation into six other possible fellow abusers is continuing. As police commander Peter Spindler says, Mr. Savile "cannot face justice today, but we hope this report gives some comfort to his hundreds of victims." And it's the closest thing to justice they've got.