Andrew Rannells is a "Girls" guy 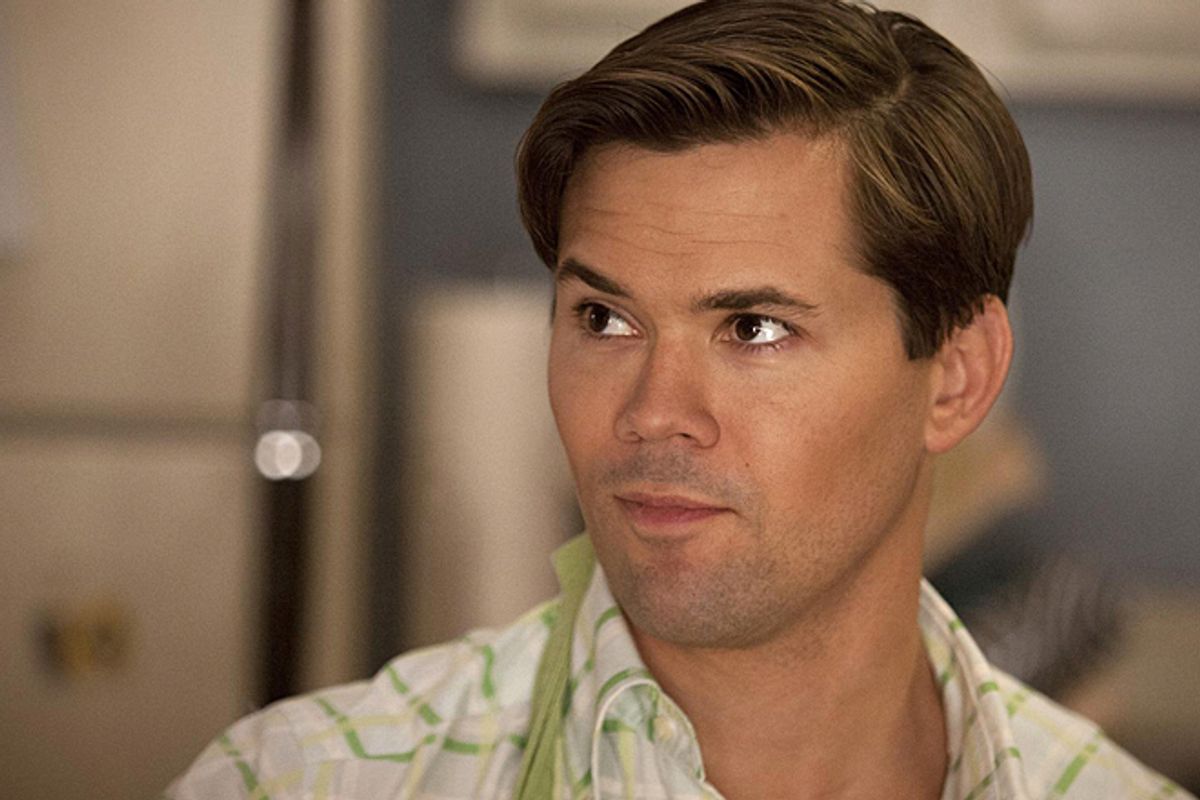 As Hannah Horvath's now gay ex-boyfriend, Andrew Rannells was a big part of one of funniest sequences of the first season of "Girls," in which his character, Elijah, came out to Hannah and, after being insulted, started to question her father's sexuality. Later that season, at the crazy party in Bushwick, Elijah smacked Marnie (Allison Williams). The irrepressible Elijah returns for the first four episodes of the new season of "Girls," which starts Sunday night on HBO. He is living with Hannah — as her new roommate. I spoke with the delightful Andrew Rannells — who also stars in NBC's "The New Normal" and who starred in the Broadway production of "The Book of Mormon" — about being the gay guy on "Girls," the politics of bisexuality and that slap.

You have a line in the new season about bisexuals and Germans being the last two groups that are acceptable to hate. How do you feel about bisexuals?

I feel like the Kinsey scale is a thing, and there is a certain fluidity to people’s sexuality. Some people ride sort of the middle maybe more than others — everybody identifies with one more than the other. But if you can literally and figuratively get it up for a girl as a gay man and maybe you want to take it for a ride, knock yourself out. Not my path, not my story, but I know a lot of people who do, and that’s great. But I do feel like, generally, people primarily identify with one or the other.

Also, with a young guy of Elijah’s age, you come out and you are out and you are comfortable with yourself, and sometimes that translates to some experimentation in the more traditional direction. I have a lot of gay friends who, after years of being out, have been like “I had sex with this girl.” And that’s just a thing that happens, that’s cool.

A sort of related thing that Elijah says is that the women who turn him on include Lisa Rinna and Allison Janney.

Did you guys improv that line?

There were a lot of options that day, there were a lot of alternate lines. The most exciting thing about working on this show is that occasionally you’ll finish, and someone will just yell an alternate at you. I remember there was a part where Lena said to me [whispers], “Say something about the Manson family.” And then we did the next take and I said something about the Manson family. It’s all scripted, but then there is some leeway to fuck around a little bit, which is great. But always, we do several runs as written, and then people come up with things. Jenni [Konner] will often come up with things as we are working and then she yells them at you or comes and whispers them at you. But if I could ever make Lena laugh, it was always such a treat. If I could come up with something to shock her, I loved it.

There are some moments this year — and last — where Elijah, despite being self-involved in his own ways, acts as a kind of reality check on the girls.

Well, it’s funny because I wasn’t in a ton of the first season, but the thing that a lot of people would say to me is, “I am so glad you smacked that girl [Marnie]. All they do is talk about themselves, and it was so great that you just hit her.”

That is really weird thing for people to say!

I know. And I was terrified about doing it. I remember talking to Jenni and Lena about it and being like “I don’t know if I can really hit her, I don’t know.” I think the compromise was to hit her like this [gesturing as though pushing a face] instead of like this [slapping from the side] because it seemed less aggressive, but I was still really nervous that I was going to be spat upon in the subway. And then people were like, “Awesome, you smacked that girl.” I don’t know what that says about New York subway culture.

What’s interesting is that it means that people who thought Marnie deserved to get slapped were also watching the show.

I know. It was always funny to me that I would go to some place, it could be an office building or something, and the security guard would be like “You on 'Girls'?” The demographic that was watching was much broader than I would have expected. It wasn’t just folks in their twenties watching. It was a lot of people.

I've read that most of the people who watch “Girls” are middle-aged men.

I know. I know people who are in that demographic who watch the show. I think it’s just a voyeuristic idea of what the real New York is. There is a lot of international press here today, and I have not spoken to any of them yet, but I am curious to see how the show translates. I know things like “Sex and the City” were really popular abroad, but I know that was not my New York. I moved to New York in the late '90s, and I was not at fucking Indochine hanging out. I am from Nebraska, and people would come visit me and be like “Where is that place they go on 'Sex and the City'” and I would be like “I don’t know where the fuck that is. I am hanging out in the Lower East Side, they don’t shoot down here. I don’t know where those bars are that they go to.” “Girls” feels more like my New York, like a real version of New York.

It feels the same as when you were starting in New York?

Absolutely. It wasn’t Williamsburg at that time, although I did have some friends who moved out there, but very much so. What’s so amazing about Lena is that what she captures is the flail-iness of that time, where you are just fucking up left and right, but in a decisive way.

This season begins and Elijah is sort of a kept man. What do you think about his situation?

It’s not for me. But I don’t think he went into that relationship with his boyfriend thinking that would be how it was. When it became that relationship, he just sort of accepted it. And everybody does that to a certain extent in relationships. It’s not always financial, but it’s like “I know my boyfriend will do blah-blah-blah," and you just let him do it. He cleans the bathroom, so that’s the way it works. And if he wants to pay Elijah's rent, he can pay Elijah's rent.

Does it seem weird to you that Elijah ever would have dated Hannah?

No, I don’t think so. If you went to college with Hannah — or if I, as Elijah — I think I would have been so attracted to the crazy quirkiness and undercover self-possessed-ness of her. And in reality that is probably exactly who gay boys are attracted to. Those are the girls that I was drawn to at a young age. So no, I think he would have been madly in love with Hannah and like, “I just love her spirit.” I can imagine a lot of head-holding conversations, lots of head petting.

Speaking of self-possessed, there is a scene where Hannah is just wandering around New York with you in a mesh shirt with her boobs hanging out.

I can’t even explain. We were filming in this pharmacy in Chelsea or something and Lena would just forget to cover up. So we would just keep walking around all like “let’s get coffee”and we would forget that her boobs were out. It was the best day ever.

And then you and Allison Williams singing karaoke — Sarah MacLachlan.

It was so great. It was really great.  Do we sing another song together?

No. Was there another song?

Damn. We sang a song by the Wreckers, which is by Michelle Branch’s country group. I am so disappointed that it’s not in there. The Wreckers. Everyone was like “What is this?” Lena picked it. She is a genius.

Do you want to be singing more?

I like to be singing where singing is expected. I don’t want to just show up on random shows singing. But I would love to do another musical. I’d like to come back to New York and do a musical, but it’s hard scheduling-wise. We’ll finish “The New Normal” in March, and then if there is a second season, we’ll start shooting probably late July. So it’s a really weird pocket of time to try and squeeze something in. It’s kind of not possible. But eventually, someday we’ll figure it out.

Elijah has chest hair. Did you discuss whether or not he should?