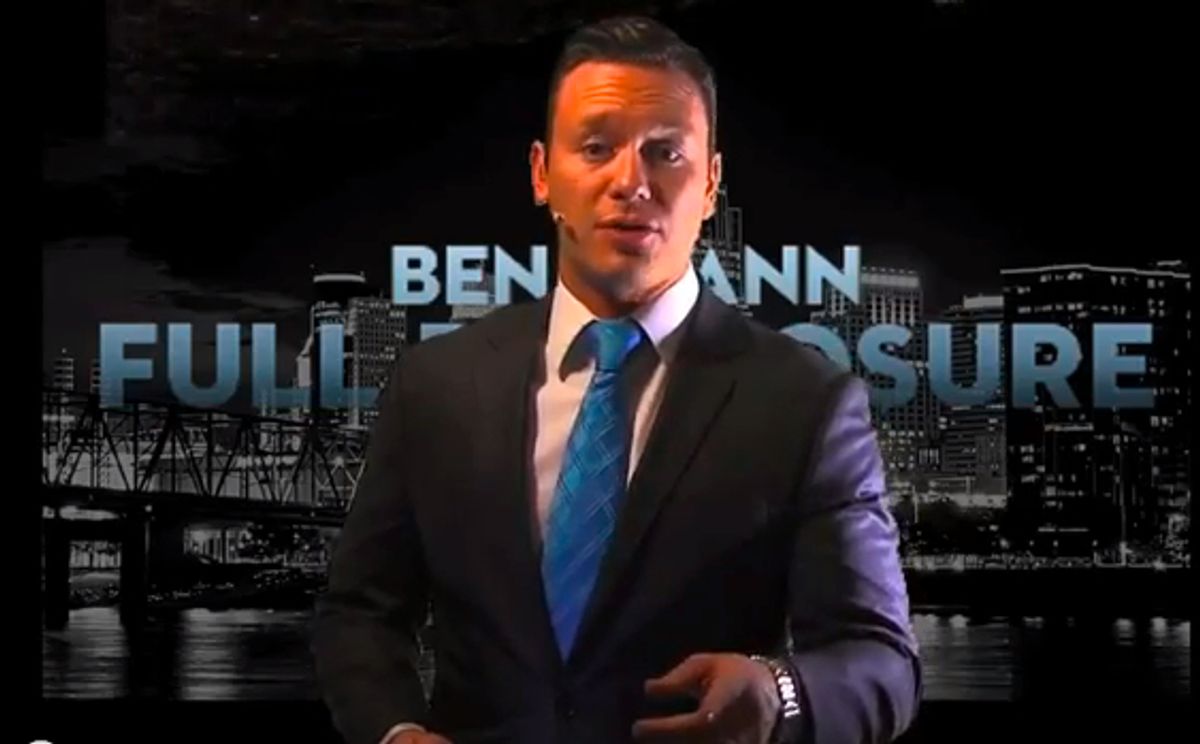 Journalists are supposed to question official accounts and probe for hidden evidence, but does questioning the media and police’s account of the Sandy Hook massacre go too far?

It’s a question worth asking in regard to Ben Swann, an anchor at the local Fox affiliate in Cincinnati, who uses his personal YouTube channel to “question this whole narrative” and advance alternative theories about the Sandy Hook and Aurora shootings.

Swann, who has attracted a national following by appealing to the Ron Paul-ish “liberty vote,” anchors two newscasts every day for Fox 19, and produces the thrice-weekly “Reality Check” segment, which is billed as a fact-checking series, but can sometimes feel like a conservative-libertarian opinion segment. His interview with President Obama, in which he grilled the commander in chief on the legal underpinning of the “kill list,” captured national headlines, and he’s won an Edward R. Murrow award. He’s been praised alternately by RT and the Atlantic for his fierce coverage of civil liberties issues, but criticized by the Washington Post’s Erik Wemple for being too friendly to Ron Paul and “allow[ing] his affection for constitutionalist politics to corrupt his judgment.”

On the side, Swann hosts “Full Disclosure,” a slickly produced Web series featuring him talking straight to the camera about mostly national stories. After I wrote about Sandy Hook truthers last week -- people who hold various conspiracy theorists about the shooting -- a Swann fan sent me a recent episode of “Full Disclosure,” produced Jan. 3, which questions the “official narrative” of the shooting spree.

Swann starts off the segment by mentioning the three mass shootings that have received widespread media attention this year: The Aurora, Colo., theater shooting; the Sikh Temple massacre in Oak Creek, Wis., and the Sandy Hook spree. “Earlier this year, I told you that there are major problems with the theory that the Colorado theater shooting was a lone wolf attack, is that true of these other two shootings as well? This subject deserves Full Disclosure,” he says at the beginning of the six-minute episode as the bumper graphic plays.

“The official story from police: This was a lone wolf attack involving just one shooter, James Holmes. Police, of course, were not there during the attack. Witnesses who were say it was not one shooter, it was two,” he continued, wearing a suit and standing in front of a backdrop showing his name floating above the Cincinnati skyline.

He moved on to the Sikh Temple shooting. While police say it was a lone gunman, “again, according to eyewitnesses, that was not the case.” He plays a few clips from interviews with eyewitnesses saying they saw multiple shooters. “In that case, eyewitnesses said ... they were four well-trained people who seemed to know what they were doing and had a plan.”

As for Sandy Hook, Swann said it sounds like a similar situation. Noting the “official narrative” says that alleged shooter Adam Lanza acted alone, “That is what police have said, but again, there is evidence beginning to emerge that that wasn’t [the case].” He shows footage from a helicopter that has been circulated widely among conspiracy theorists allegedly showing two shooters running into the woods behind the school (media accounts say the man was a parent who ran from the school after hearing gunshots).

“So what you need to know here is that in all three of these cases, there isn’t just wild speculation that maybe there was more than one shooter. In fact, there’s a good reason to question this whole narrative. Because there has been no evidence so far -- no evidence provided by police, other than what they told us -- that there is only one shooter here.”

At the end, he calls on police to release surveillance video from the scene of the shootings to prove there were not other shooters on the scene. The video has more than 80,000 views.

Of course, there is always all kind of false information and confusion in the immediate hours after a tragedy, and several of the eyewitnesses he shows had actually heard reports of multiple shooters secondhand from friends or relatives at the scene.

In another recent episode of the show, Swann takes a generous look at the LIBOR conspiracy theory, which speculates that there is a connection between Lanza and Holmes via their fathers’ alleged upcoming testimony on the banking scandal. Swann eventually dismisses the bulk of the theory, but not before credulously investigating the connection and the claims of “alternative media.”

“However, and here’s where it gets interesting,” Swann continues, “it does appear that Peter Lanza’s GE capital division, over which he was vice president, again according to ABC News, was involved in a bid-rigging scheme that used LIBOR rates to manipulate the bond market. That is the story as we know it so far. Is there more? Maybe. And we’ll keep looking for it.”

In a third “Full Disclosure” episode on Sandy Hook, he does rightfully debunk a meme floating around “alternative media” that Connecticut State Police had threatened to arrest people posting what they consider to be false information about the Sandy Hook massacre on social media.

In September, Swann appeared on the radio show hosted by Alex Jones, America’s most popular conspiracy theorist, who recently battled Piers Morgan. Jones says of Swann in his effusive intro: “Basically, he’s like a professional, focused, kind of news-style Alex Jones, which I love ... I think this guy’s going places because he’s got it all ... He just absolutely knocks it out of the park.”

Asked by Jones how he’s allowed to cover the stories he does, Swann praises the owners of his station, Raycom Media, saying, “I work for guys who are just interested in getting out factual information.”

In an email, Swann defended his work, saying he is simply doing the work any journalist should do. "The bottom line for me is the issue of asking questions. As you will notice, I don't call these operations 'false flag' as many people do ... But as a journalist, that is not my job. Rather, my job is to be a critical thinker," he wrote (ellipses his).

Asked if the media is complicit, he said it's difficult for him to answer, but said, "most of our media fail to question stories."

"Take the Wisconsin temple shooting. Multiple people reported 4 shooters on the building. Even in the 'fog of war' it would be difficult to mistake 1 person for 4," he wrote. "As you know, a journalist's job is not to have the answers, it is to ask the questions and search for truth. That is why at the end of the video we call for the release of surveillance video to set the record straight," he said, adding that other journalists in Colorado have also called for the release of the footage.