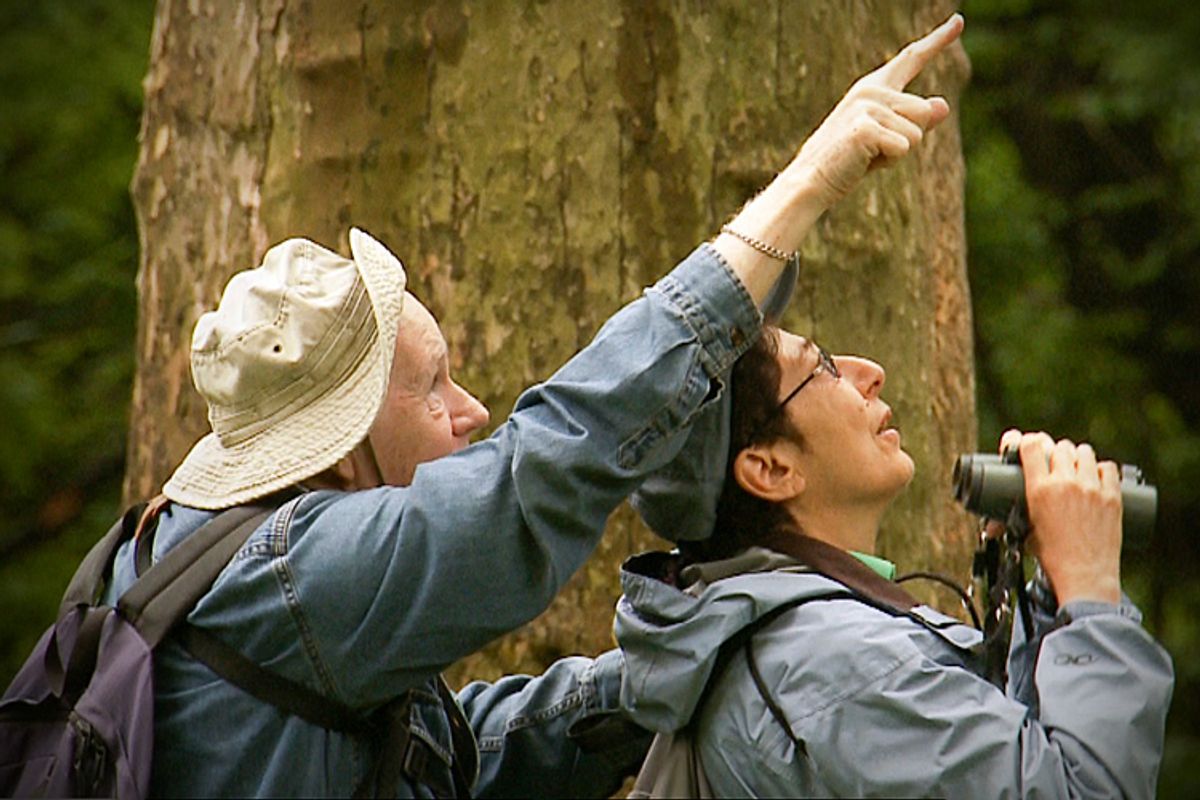 My Central Park bird species was Nycticorax nycticorax, or the Black-crowned Night Heron. It’s not an unusual or endangered bird or anything, and can be found in most parts of the world. It's just that I wasn't expecting to encounter one in the middle of Manhattan. A slightly squat, gray-and-white predatory water bird about 2 feet tall, it hunts by night (as the name suggests) and spends its days hunkered down in trees by the water’s edge, which is where my wife and I met one in the spring of 2005, by the pond in the southwestern corner of the park. We weren’t birding or anything. We were the underslept parents of 1-year-old twins, relishing a brief springtime escape in a city park whose wildlife population seemed dominated by rats, pigeons, pond turtles and other invasive scavenger species. The heron was not interested in our amazement. He opened one eye, shifted slightly on his branch, and went back to sleep.

If you’ve ever had that moment of urban discovery – of realizing that the natural world is always with us, or nearby – then Jeffrey Kimball’s lovely documentary “Birders: The Central Park Effect” is for you. If you’re concerned that watching a movie about an activity stereotypically assigned to old ladies in sneakers will consign you to permanent dweeb-hood, I refer you to novelist Jonathan Franzen, a birder who has evidently been wrestling with this question. You can’t look cool or elegant when you’re wandering around peering at birds through a pair of binoculars, Franzen laments to Kimball’s camera. You’re vulnerable, you’re searching, you want something, which is the opposite of the detachment or ironic distance demanded by coolness.

If you really want to wriggle around that logic for a while, you’ll probably come to the point of seeing that Franzen is arguing that he really is cool for refusing the signifiers of coolness, and for rambling through Central Park in a rumpled polo shirt and chinos in search of a Prothonotary Warbler or a Northern Shoveler. Nobody else in Kimball’s revelatory little film, which has the unique elegance of being exactly an hour long, seems to feel the need to justify themselves to quite that extent. (“Birders” premiered on HBO last summer, and is now appearing briefly in theaters before DVD release next week.)

Nor should they. Rather than portraying the culture of New York City birders (“birdwatchers” is what non-birders say) as eccentric or antisocial, Kimball’s film suggests that it is the rest of us who are the weirdos by refusing to see the beauty and natural variety that is almost everywhere around us. The thing about birds in cities, as various people observe in the film, is that they remind us that we are still creatures of the natural world, even if for most North Americans nature is a thing that’s been boxed off and preserved somewhere else. “If buffalo migrated through New York City, I’d come to see them,” one birder says. “Birds are all we have left.”

This is not a nature movie entirely free of gloom, I’m sorry to say. As former Audubon Society head John Flicker – yes, that, marvelously, is his name – tells a group of Central Park birders, even common non-endangered species of birds have experienced precipitous population declines in recent decades, and the prospect of widespread avian extinction is very real. Still, urban islands of green like Central Park, a manufactured wilderness that now behaves almost like a real one, can attract staggering numbers of migratory birds. A total amateur with a decent bird guide and a pair of binoculars can easily observe 30 or 40 species on a spring or fall ramble. Over the course of a year, well over 200 different species – about a quarter of the total number found in North America – can be found smack-dab in the middle of the continent’s largest city.

The height of the Central Park birding season runs only five or six weeks, from about the middle of April to the end of May. That’s when the “neo-tropical warblers” who have wintered in Mexico and Central America start making their way northward for the summer breeding season, clad in their spring plumage. On a sunny morning during that spring Atlantic Flyway migration, there can be many thousands of hungry travelers, clad in their brilliant spring plumage, descending on New York for a bite to eat and a little R&R. What’s more, the migratory species who visit Central Park seem to have become habituated to the congested urban conditions, and often permit human observers to approach within a few feet of them.

But of course one can see birds in Central Park, or anywhere else on the continent, 365 days a year. Kimball follows New York’s birding community through an entire year, focusing on a diverse group of lifers, from a septuagenarian birding guide battling breast cancer to a high-school student to a middle-aged man who repairs brass instruments. Even they come out more often in April and May, but they can also be found in the park on frozen mornings in February or muggy afternoons in July, observing the less glamorous permanent residents: robins, ducks, nuthatches, cardinals and so on. (On one famous occasion, a robin family built its nest on the statue of Romeo and Juliet outside the Delacorte Theater – right between Juliet’s breasts.)

If one were truly being obnoxious, one might identify Franzen, the author of “Freedom” and “The Corrections,” as the celebrity face of birding. If birding is to have a rebranded future as a trendy Zen pastime, formerly for hopeless nerds but now chic, in the vein of quilting or canning, he will be its transformative figure. But, see, I am being obnoxious. As “Birders” makes clear, and as Franzen would surely agree, birds and birders have always been among us and require no reinvention. What they have to offer us is what that heron offered me, for just a split-second – a sense that despite our best efforts we are still a part of nature, and not yet an alien species disconnected from the real world.

“Birders: The Central Park Effect” opens this week at Cinema Village in New York, and will be released Jan. 22 on DVD and by digital download.