The NRA takes a shot at Obama 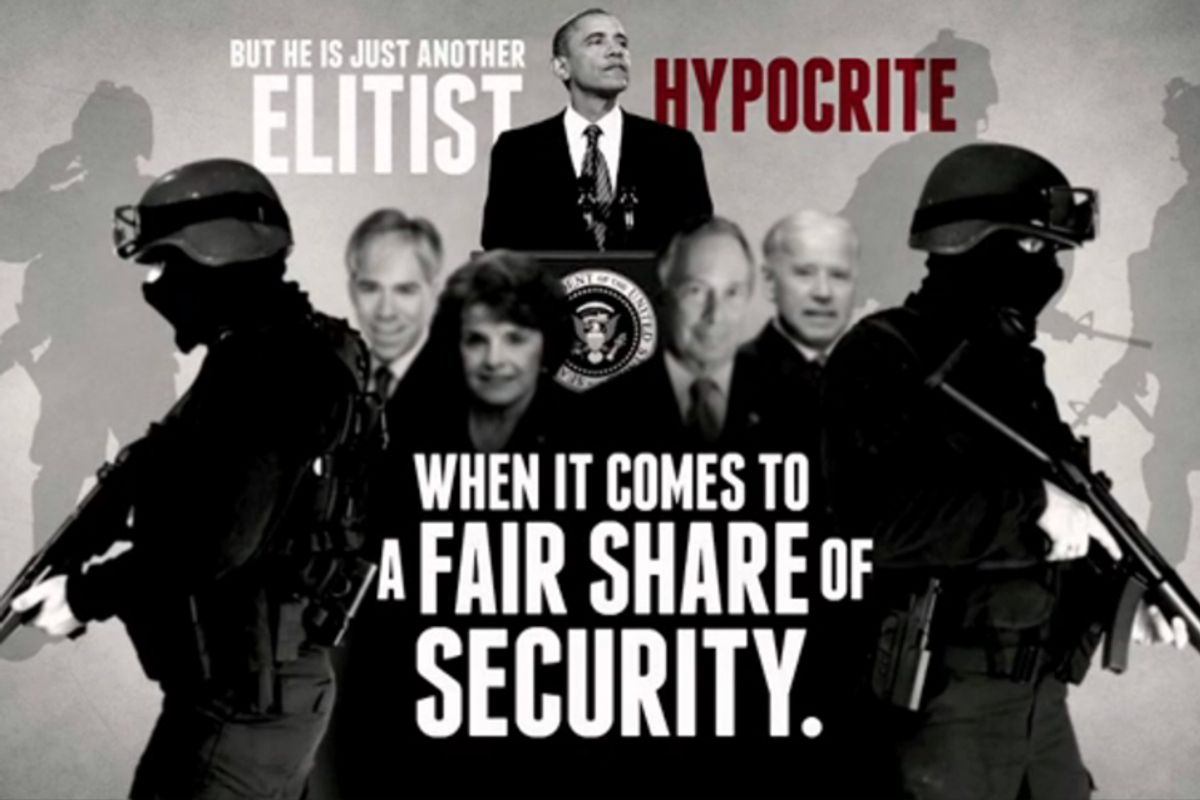 This is what desperation looks like. And it's ridiculous.

It wasn't that long ago that the NRA seemed too big to fail. Too powerful to take on. So mighty a force that the words "gun control" could not even be uttered in the course of the presidential campaign, lest they set off an avalanche of screaming over the Second Amendment. Then came Sandy Hook.

In the brief few weeks since the massacre in Connecticut, we've experienced a massive cultural shift. We've had our most serious – and direct – national conversation about guns in decades. New York has already signed into law tougher gun control measures -- a move the NRA has predictably already deemed "draconian." And in a week in which it's already embarrassed itself by releasing an ill-timed "Practice Range" app for kids aged 4 and up, on Tuesday the NRA upped the ante with its dumbest, most nonsensical move in, oh, hours.

In a new ad designed to expose the obvious double standards of – dun dun dun! – Barack Obama, the NRA asks, "Are the president's kids more important than yours? Then why is he skeptical about putting armed security in our schools when his kids are protected by armed guards at their school?" Um, because they're the daughters of the president of the United States? The ad goes on to call him "just another elitist hypocrite when it comes to a fair share of security." Yeah, in the words of Rick Santorum, what a snob. We look forward to the NRA's next line of searing inquiry: Why does Obama get to have an office that's oval shaped while the rest of us have to settle for rectangular? Why do members of the Supreme Court get to wear cool black robes and we regular Joes are forced to wear pants? The people demand answers!

Just on the off chance you find yourself in a conversation today with Wayne LaPierre, or someone else who honestly doesn't understand why the immediate family of the person with the highest office in the land might need a security detail, here are few guidelines. Feel free to ask him the last time someone was nabbed for making death threats against his own kids. Then ask when the last time someone was nabbed for threatening to kill Obama. Answer: Sunday. Ask him if he's seriously suggesting we need a rethink of the Secret Service, or if he believes the gun-toting "local volunteers" Wayne LaPierre suggests we let roam our children's school hallways are on a par with the trained professionals who protect the president's family. It is to laugh! Or just quote Joe Scarborough, who on Tuesday called the ad "frightening and over the line." Better yet, quote the NRA. So confused is the organization about what it is doing that on Wednesday morning NBC's Mike O'Brien reported that a spokesman had announced, "Whoever thinks the ad is about President Obama's daughters are missing the point completely or they're trying to change the subject." Because the real subject is how unfair it is the president's family get special treatment? Or that you can't be in favor of saner gun laws and be protected by people who carry guns? Even though that reasoning eliminates everyone who lives in a town that has a police force? You know what, I give up.

Yet the spot, for all its craziness, is plenty effective. It may bomb out as an argument for armed "volunteers" in our schools and an indictment of a president for using the security he's authorized by law to have. But it does beautifully demonstrate how desperate and pathetic the NRA has become of late, how eager it is to grasp at any rhetorical straw, no matter how flimsy it may be. How little it truly has to say.