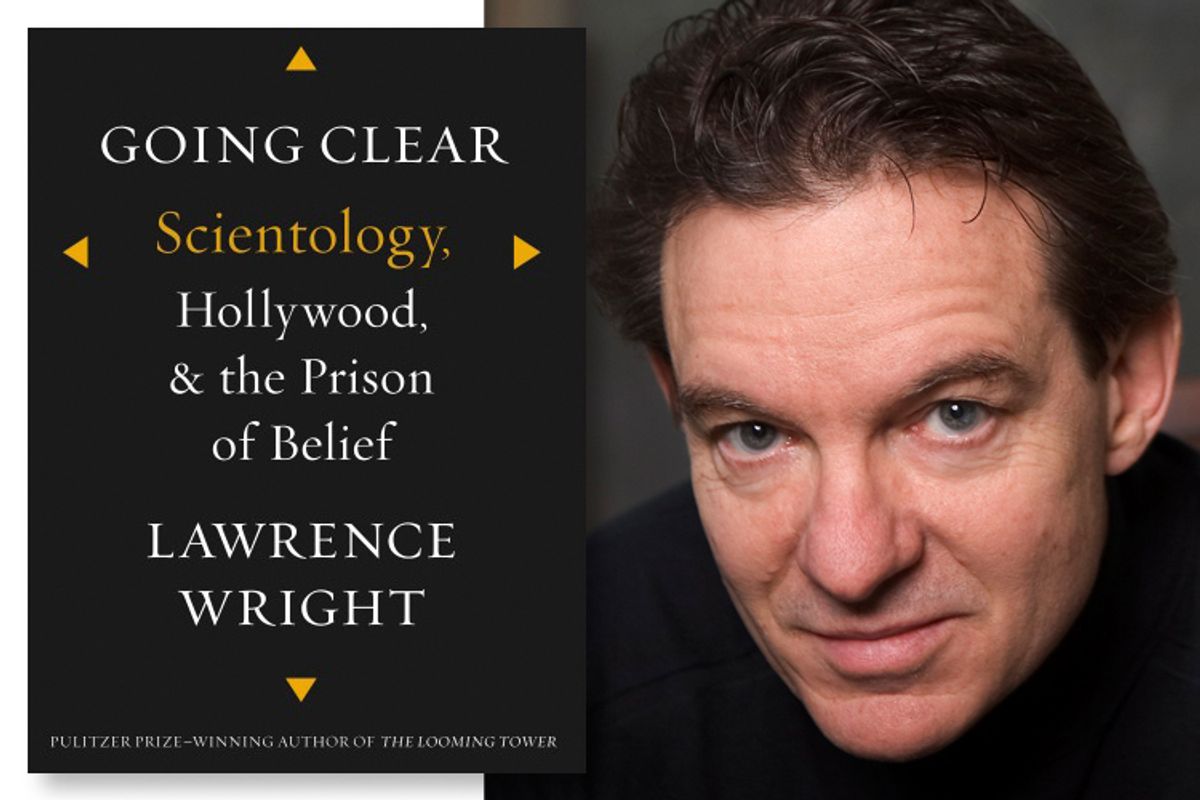 Several years ago, for a series of Salon articles about Scientology, I was asked to review the founding text of the church, "Dianetics" by L.Ron Hubbard, first published in 1950. The book seemed so clearly the work of a man suffering from particular and pronounced mental health issues that I became, for the first time, curious about its author. Like most self-help books, "Dianetics" frequently invokes case histories or hypothetical scenarios, but unlike most self-help books, Hubbard's stories featured an alarming amount of violence, specifically domestic violence.

Over and over, when imagining a childhood source for an individual's problems, Hubbard spins tales of unfaithful wives and husbands who beat and verbally abuse them, sometimes kicking their pregnant bellies. Perhaps we can attribute some of this to a preoccupation with prenatal trauma; "Dianetics" insists that fetuses can understand damaging statements made to the women carrying them. Nevertheless, to me, the most striking thing about the book -- besides Hubbard's belief that it is "not uncommon" for women to make "twenty or thirty" attempts at a self-induced abortion with orange sticks and other implements -- is its author's assumption that such beatings are a commonplace aspect of most people's home lives.

I wanted to find out if Hubbard had grown up amid such abuse, or had experience of it in his adult life, so I went online to poke around. What I found, on assorted anti-Scientology websites and discussion forums, seemed so outlandish and extreme that I decided not to refer to those charges at all in my review. I couldn't be sure they were substantiated.

Scientology has involved preposterous claims from the very start -- from before the very start, actually, since "Dianetics" (published two years before the foundation of the church) promises that a "clear" (an individual who has succeeded in using the Dianetic "technology" to free him- or herself of all impairing "engrams") will attain assorted superpowers. These include healing his or her own disabilities and illnesses, as well as perfect recall, the capacity to perform "mental computations" at lightning speeds and various forms of mind reading and control. Scientology's critics, on the other hand, accused Hubbard of -- yes -- domestic violence (including an incident in which he demanded that his second wife kill herself to prove she really loved him), to bigamy, lying about his service in World War II, engaging in black magic rituals and throwing followers who displeased him off the high deck of his ship. The church has countered such attacks by flinging accusations at its critics, from public drunkenness to adultery and homosexuality.

The whole mess seemed like a seething farrago of bizarre fantasies, vendettas and nightmares, indistinguishable from whatever grains of truth lingered here and there. A phenomenally diligent and rigorous investigator could probably sort it all out, but the Church of Scientology is notorious for using nuisance litigation to hound skeptical journalists to the brink of destitution and despair. Who'd be up for that?

Lawrence Wright was, and my long preamble is all by way of explaining why his new book, "Going Clear: Scientology, Hollywood and the Prison of Belief," is so invaluable. There have been other exposés of the church -- including last year's fine "Inside Scientology: The Story of America's Most Secretive Religion" by Janet Reitman, a book Wright praises in his own -- but this one carries the imprimatur of both Wright, a Pulitzer Prize-winner, and the New Yorker magazine, where Wright first wrote about the church in a story on its cultivation of celebrity members, as exemplified by movie director Paul Haggis.

The church adopted its scorched-earth policy toward critical journalists back when Paulette Cooper published "The Scandal of Scientology" in 1971; she was subsequently slapped with 19 lawsuits, as well as subjected to a harassment campaign with the stated intention of seeing her "incarcerated in a mental institution or jail." What the organization did not foresee was that the effectiveness of such tactics could never be more than short-term. So ominous is the reputation of the Church of Scientology in this respect that when a major news organization of legendary rigor committed itself to an exposé, there could be no doubt that it was fact-checked to a fare-thee-well. The result, extended to book form by one of that organization's most esteemed journalists, is completely and conclusively damning.

Not that Wright is the least bit intemperate in his account of the improbable rise of Hubbard from an unimpressive career as a naval officer and pulp science-fiction writer to a millionaire guru presiding over a high-seas empire of slavish devotees to reclusive leader holed up in a well-appointed mobile home. He doesn't have to be. Hubbard's outrageous shenanigans and flagrant misdeeds speak for themselves, so Wright need only convey the facts with a minimum of hoopla. He strives to be fair, noting all the ways that Scientology resembles other religions that began as suspect or fringe movements, but he catches church spokesmen in so many lies and unearths so much evidence of malfeasance that his caveats do tend to get swamped.

It turns out that even the craziest stuff I read on the Internet back in 2005 is essentially true, and that the history of the church under its current megalomaniacal leader, David Miscavige, is, if anything, even more disgraceful. (Hubbard died in 1986.) Wright has assembled an overwhelming number of confirmed reports of Miscavige punching, kicking and otherwise attacking church leaders, often without warning or explanation. He details a well-developed system of isolation and indoctrination imposed on the members of Sea Org. (Scientology's equivalent of a clergy), creating a population that provides the church with virtually free labor and submits to extravagantly harsh and humiliating punishments, such as cleaning bathroom floors with their tongues and scrubbing out dumpsters with toothbrushes. Meanwhile, Miscavige lives in luxury, bathed in Kim Jong Il-levels of totalitarian hagiography, at the church's secluded base in rural Southern California.

Wright's particular interest is in how the church courts and coddles its celebrity members. These Scientologists are carefully shielded from the harsher conditions and uglier aspects of the organization. Tom Cruise, John Travolta, Anne Archer and Jenna Elfman number among the church's most prominent trophies, as did Haggis -- before he became disgusted with the leadership's refusal to denounce an anti-gay ballot proposition in California and decided to dig beneath the flattering, gleaming face it presents to its celebrity members. Wooing emerging actors and entertainment-industry players was one of Hubbard's most inspired initiatives, and the church continues to deploy such people strategically, introducing balky local politicians to movie stars and fostering the impression that a Scientology affiliation will help Hollywood aspirants climb to the top of a ruthlessly competitive profession.

I could go on and on, listing Hubbard's tall tales, paranoid delusions and eccentricities, as well as Miscavige's brutalities and tidbits from the famously wacky and decidedly unscientific Scientologist cosmology. All of it makes for a wild ride of a page-turner, as enthralling as a paperback thriller. But I keep coming back to my original impression of "Dianetics," and the sobering realization that one man's personal damage can, if transmitted with sufficient charisma and intuitive skill, infect tens of thousands of people, many of whom believe they've been helped by it.

Hubbard, as Wright acknowledges more than once, was a charmer, with a knack for manipulating people. He knew, somehow, that there is no behavior more likely to foster fascination and dependence than intermittent reinforcement, enveloping approval and assurances of future bliss shot through with unpredictable episodes of domination, insults and terror. That is the dynamic of the abusive family, a dynamic that prevails in Sea Org. and the hidden enclaves of Scientology. From what Wright reports, it looks like my curiosity about Hubbard's earliest years will never be satisfied. But now I can make an educated guess.