"American Idol" catfight: Nicki and Mariah duke it out over "Mean Girls"!

"American Idol" returns for its 12th season, reigniting one of television's most ridiculous feuds 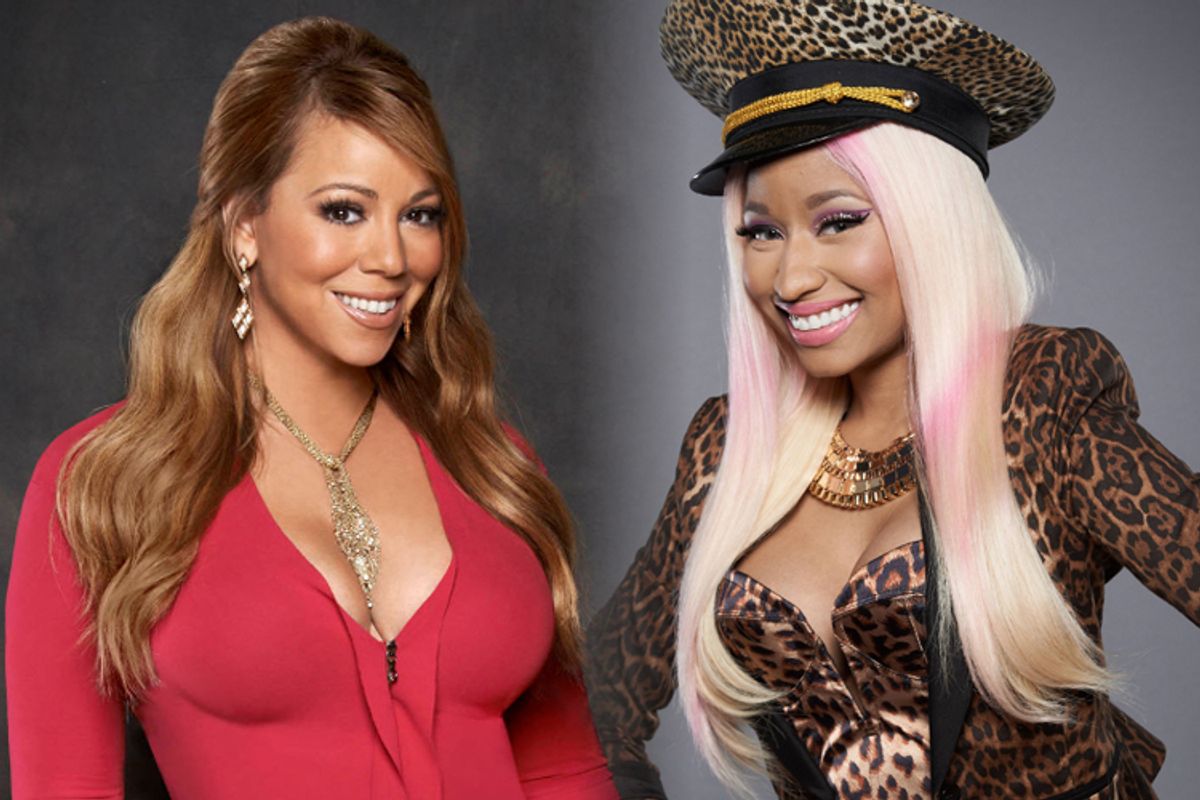 It was just a little over 10 minutes into the new season of "American Idol,"its 12th, when new judges Mariah Carey and Nicki Minaj started bickering about “Mean Girls.” “I want to lose three pounds,” Mariah said, sitting at the judges table getting her hair and make up retouched.  “I know how you can,” Nicki sassed back. “It’s a quote from 'Mean Girls.' If you knew 'Mean Girls' you would know,” Mariah countered. “I do know ‘Mean Girls,’” Nicki replied “Okay, who says ‘I want to lose three pounds?’ Which character?” Mariah asked. Incapable of leaving the bait untouched, Nicki tried, “Not Lindsay. The other one, with the blonde hair.” “What’s her name?” Mariah insisted. “You know something, Mariah …" Nicki began. Australian country star Keith Urban, the other new judge, pinched the bridge of his nose.

Much has been made of the Mariah-Nicki feud going into the new season, which has Mariah, Nicki, and Keith replacing Jennifer Lopez and Steven Tyler — the judges who helped the show transition out of the Simon Cowell years — but nobody promised anything as wonderfully adolescent and surreal as a fight about “Mean Girls.” (It came up again later, with Nicki insisting Mariah "is Regina George.") The Mariah-Nicki feud, based on last night’s display, is to catfights what “Idol's” string of cute-ish white boy winners is to rock and roll: the appealing, non-threatening, professionally packaged kind that you find yourself smiling along to without conscious thought. When Mariah and Nicki trade insults, it's with smiles on their faces, dueling British accents, and minimal eye contact. Stretching out her arms and talking to no one, Nicki sing-songed “She’s a bitch! She’s a bitch.” “If she called me something that begins with a 'b' and ends in an 'itch' I rebuke it,” Mariah smiled back, playing with her soda straw. The new season of “Idol” should be great fun.

Mariah and Nicki don’t like each other, but they are not crazy or drug-addled or quiet. After the exceedingly dull celebrity spectacle that was Britney Spears on "the X Factor,” it is genuinely pleasant to have three fully sentient, energetic, well-spoken people who know something about music (and Randy Jackson) talking to all these wannabe “Idol” winners. It's also a relief to be watching a show so confident in itself that it doesn't have to make a huge deal about what a big deal it is. Ryan Seacrest's opening monologue about the cultural importance of "Idol" contained the phrase "Together, we’ll take the journey that defines a nation," and while I sincerely hope "American Idol" is not the journey that defines our nation, I do appreciate that after this requisite posturing the show got out of its own way, showing auditions and singers, not endless shots of big crowds and its own hype.

Whatever their interpersonal issues, the four judges are chatty, discursive, knowledgeable, not so opinionated as Simon Cowell, but not pushovers either. The cute, guitar playing 23-year-old with the amputated leg who had recently recovered from cancer wasn’t terrible, but he wasn’t great: The judges politely sent him home despite his backstory. The teen girl who lived on a farm and could sing Carrie Underwood and rap Nicki Minaj’s “Superbass” sparked minutes of conversation about whether a young performer has to be one type of singer or another. The oddball Asian kid with oversize glasses and no talent whatsoever was sent home gently: Mariah wondered if he had ever considered being a D.J. Nicki told him, “I would never do this when I was young, I was so scared.” One performer in a wig and a red plastic Michael Jackson suit that made unfortunate farting noises every time it moved sent Keith under the judges table in embarrassment —  I was right there with him.