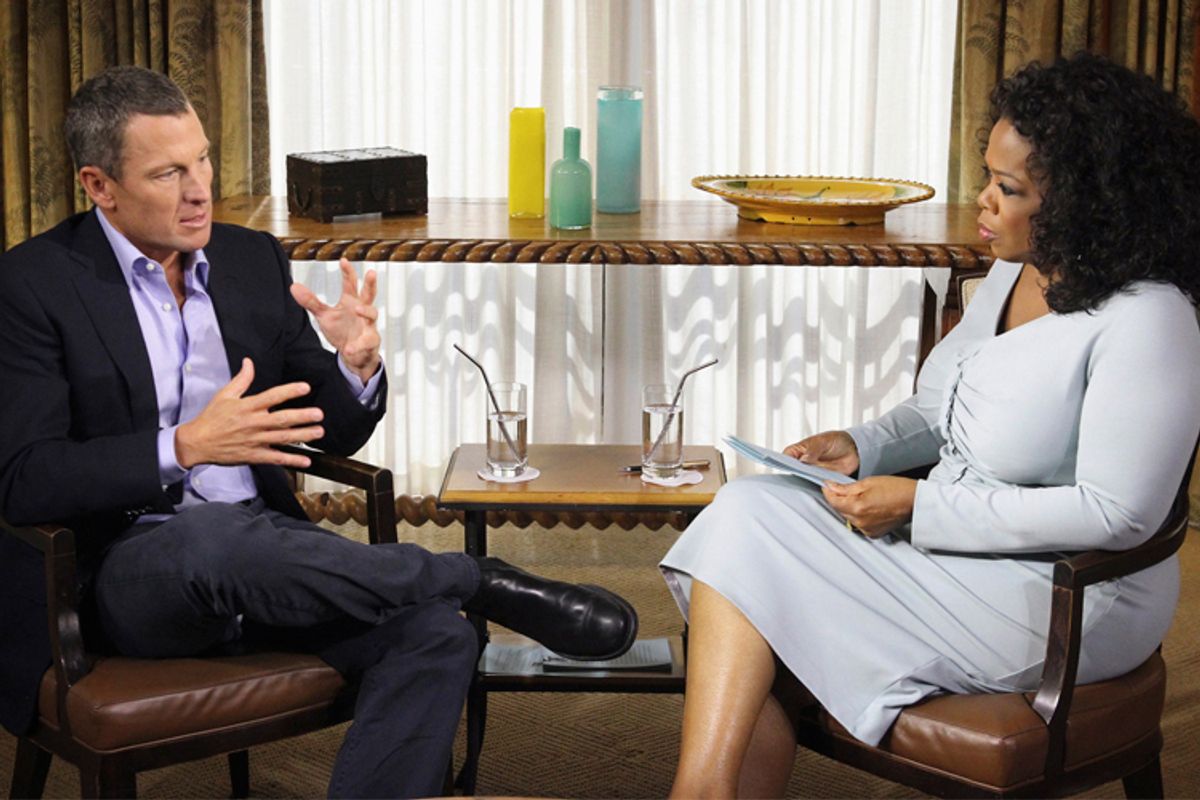 Lance Armstrong appeared with Oprah last night, the first part of a two-part confession special, to publicly admit to taking the performance enhancing drugs he has not just denied using, but vehemently, ruthlessly denied using, denigrating and bullying and seeking to destroy the far less powerful people who have told nothing but the truth about his habits. Armstrong picked Oprah to conduct this interview — as opposed to some sports journalist, or Barbara Walters, or Brian Williams or any of the other possible choices — because she alone confers on public screw-ups the sense that just by speaking to her they are beginning the long road back to acceptability. Oprah is a journalist, as she ably demonstrated last night, but she also occupies a particular space, that of celebrity confessor in chief, our national moral proxy, the woman empowered to find her subjects wanting or sufficiently remorseful, the person who accepts tears but not excuses, holds her subjects to the facts and, more important, the feelings. Unfortunately for Lance Armstrong, he does not appear to have enough of those.

The interview began with seven very effective yes or no questions, getting the central truths, the truths Armstrong has denied for so long, out of the way in a brutal incantation: Did you ever take banned substances to enhances your cycling performance?  Yes. EPO? Yes. Blood doping? Yes? Testosterone, Cortisone, Human Growth Hormone? Yes. Was he doping for all seven of his Tour De France victories? Yes.

Even in these initial answers, Armstong, his hair flecked with new gray, seemed both nervous and extremely well coached. He smiled at inappropriate times, an unfortunate anxious tic for television, but he knew what he was supposed to say and had received directives on how — to accept responsibility, to speak declaratively, not to prevaricate, get defensive, or dodge blame. As he settled into the interview, getting less immediately uncomfortable, all the preparation began to seem like a sort of callousness, as if he’d practiced saying the horrible things he had done so many times, it was no longer hard for him to say. He was confessing his sins, but it didn’t seem as though it hurt him to do so.

There were lots of strangled, passive constructions, “I was wrong, they were right,” he was here “to say sorry,” without ever saying “I’m sorry.” His answers, all delivered calmly, sometimes meandered: “That’s the best question. It’s the most logical question, I don’t know that I have a great answer. I will start my answer by saying this is too late, probably for most people, and that’s my fault. I view this situation as one big lie that I repeated a lot of times. It wasn’t just if I said no and I moved off it,” was his response to the question of why he didn’t just lie, but lied so brazenly. An old video of him lying about his drug use showed him saying “absolutely not,” which made it that much harder to believe the “absolutely nots" he used when talking to Oprah. (Armstrong did “absolutely not” dope in his final two tours, in 2009, 2010.)

And despite all the declarative, responsibility-taking yeses and nos, over the course of the interview, Armstrong did some really questionable, distasteful evading: His steroid programs was “conservative,” “risk averse,” certainly not the largest and most professional such drug program of its kind ... because the East German steroid program was bigger. (That’s like saying, "I’m not that bad a guy, because Hitler was worse.") He expected a level of performance from his riders that could only be achieved through doping, but he insisted he never verbally commanded them to dope, even though he also “understands” they were following his lead. He called a woman crazy, tried to ruin her life, and keep her husband from cycling, but he didn’t call her fat. He "absolutely" did not dope on his final two tours.

The interview is two nights long, and presumably much of tonight’s segment will be dedicated to discussing the Lance Armstrong foundation, and what his lies mean for cancer research and cancer patients. (There are reports that Armstrong does cry; maybe it will be then.) But in Thursday’s segment, cancer was the thing that turned Armstrong into a bully: “I took drugs before [my illness], but I wasn’t a bully before that,” is how Armstrong put it, saying that his win at all costs mentality was forged during his sickness, “which was good,” and then carried over on to cycling, “which was bad.” His cancer also helped him “almost justify” taking testosterone “because I must be running low.”

As the interview aired, I was reading my Twitter feed and the consensus (of an admittedly small sample size) seemed to be that Armstrong did not seem sufficiently contrite or genuinely remorseful. I don’t disagree: He certainly seemed like the kind of guy who could ruthlessly and systematically use all of his power to defend his lies. But I do wonder if there’s not some bias — call it a cry-bias — at play here. At one point Oprah asked Armstrong a string of questions: “Did it feel wrong at the time,” “Did you feel bad about it at the time, “Did you feel that you were cheating at the time.” To all of these questions, Armstrong replied no. This is stark and undoubtedly true, deeply unflattering thinking. In answering truthfully, Armstrong exposed the egomaniacal worldview that made his actions possible, showing himself to be an asshole in a much less self-justifying way than if he had said, tearfully, something like “No and I struggle to live with this every day,” a BS, pandering answer that would have, nonetheless, been far more effective in making him appear contrite.

Lance Armstrong is a man who likes to “control all outcomes,” a competitive maniac who believes in brutal preparation: If he did feel true remorse, would such a guy “tell” Oprah in the ways we “believe”? A teary apology directly to the camera can be as manipulative as anything else (even if it can also, sometimes, be honest). Armstrong is a bad man, but he is also a man who can't get the benediction Oprah can confer. He can confess, but she — and we — only offer penance to those who show genuine remorse, and we all know what that looks like, having seen it on Oprah so many times before.