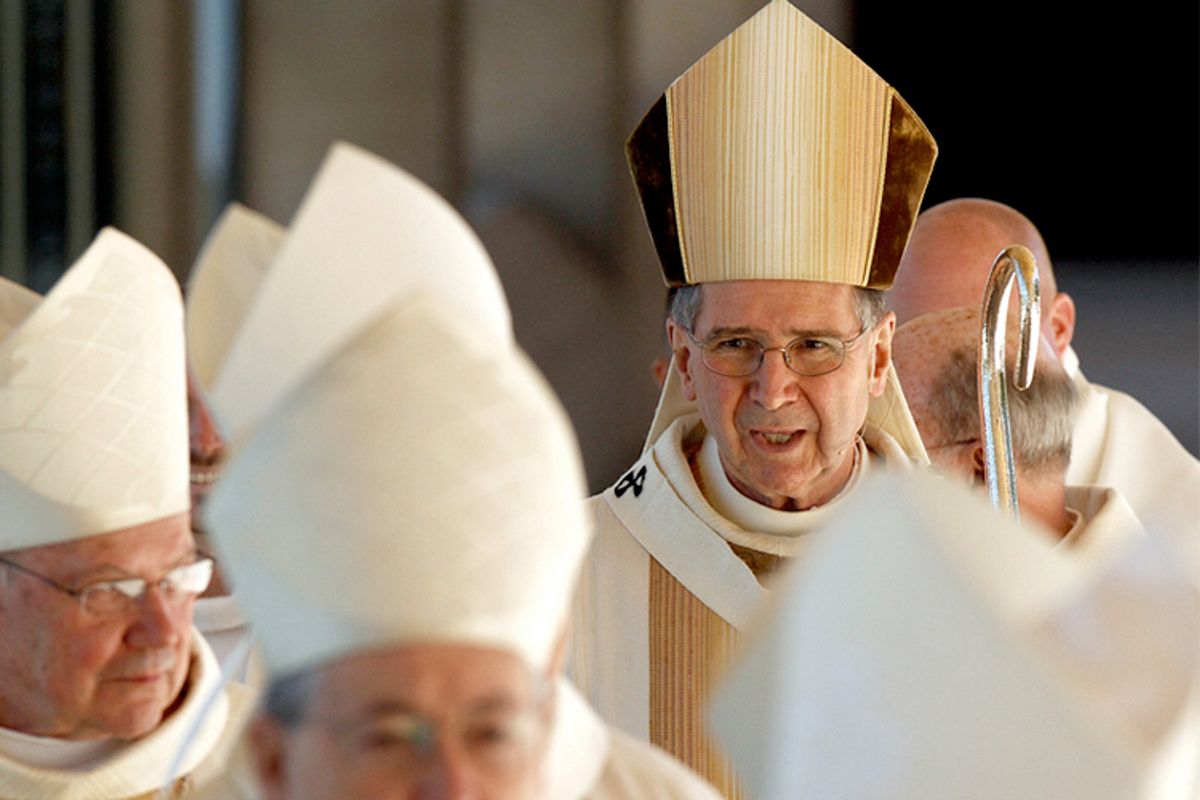 It's been a good 10 or so days since the last time the Catholic Church revealed itself to be somewhat less than forthcoming about the decades of sexual abuse perpetrated by trusted members of its own ranks. So it should come as a demoralizingly thorough non-surprise that it's time again for another revelation of harrowing behavior – and systematic deceit. On Monday, the Los Angeles Times' Victoria Kim, Ashley Powers and Harriet Ryan published newly released internal documents revealing how Archbishop Roger M. Mahony and his adviser Msgr. Thomas J. Curry conspired together in 1986 and 1987 to "shield abusers from police."

The memos, which the L.A. Times notes "the Archdiocese fought for years to keep secret," show, in sickening detail, how the local church authorities endeavored to make sure to attract as little legal and public attention for three men they knew to be abusers. In a June 1987 memo, for example, Curry writes of Rev. Michael Baker, who admitted his sex abuse to Mahony in 1986. In it, he suggests Baker avoid meeting with a psychologist or psychiatrist, because "if he were to mention his problem with child abuse it would put the therapist in the position of having to report him," and adds, "he cannot mention his past problem." Mahony replies with a handwritten "Sounds good – please proceed!" In another document, Mahony writes to a New Mexico treatment center about Msgr. Peter Garcia, who was known to have had "perhaps 15 to 17 relationships with youngsters in the age range of 12 to perhaps 17 or 18." He tells the staff there, "I feel strongly that it would not be possible for Monsignor Garcia to return to California … The two young men who were involved with him and their parents have switched attorneys on several occasions, and I believe that if Monsignor Garcia were to reappear here within the Archdiocese we might very well have some type of legal action filed in both the criminal and civil sectors." There's also a memo from Curry that describes the actions of Father Michael Wempe, and of how "we discussed the possibility of his consulting a lawyer who would refer him to therapy, thus putting the reports under the protection of privilege." Man, these guys were slick. As the L.A. Times notes, "Two decades would pass before authorities gathered enough information to convict Baker and Wempe of abusing boys."

What's astonishing now, in light of a continuing deluge of new information, isn't that the local Catholic Church administration would put protecting its own ahead of considering the nightmare it was perpetuating for the victims -- that's pretty much a given. It isn't even the lack of reporting to authorities – after all, churches weren't legally required to do so then as they are now. It's the apparent total lack of empathy that had to exist to describe a relationship between a priest and a 12-year-old child in terms of "surrogate father but also sex partner." And it's the way that diocese lawyer J. Michael Hennigan could admit casually that the actions of  Mahony and Curry "sometimes focused more on the needs of the perpetrator than on the serious harm that had been done to the victims … We are embarrassed and at times ashamed by parts of the past. But we are proud of our progress, which is continuing." He said that on Monday. Sure, sometimes they thought more of the pedophiles and at times they're ashamed by parts of the past. But overall, has anybody really done a count of all the Los Angeles priests who weren't child molesters in the '80s? All the children who weren't sexually abused? Averages, people!

On Monday, Mahony himself issued a statement in which he explained that "even as we began to confront the problem, I remained naïve myself about the full and lasting impact these horrible acts would have on the lives of those who were abused by men who were supposed to be their spiritual guides." He also said that that between 2006 and 2008, he personally visited 90 victims of abuse and apologized to them, that he prays for them daily and that "I am sorry." It doesn't change his duplicity and grotesque, willful behavior and callous insensitivity.  But unlike his diocese lawyer, it at least shows contrition without qualification. And Mahony's going to get a lot more practice at it. In the coming weeks, more church files will be made public. They involve "at least 75 more accused abusers" -- and over 500 victims.