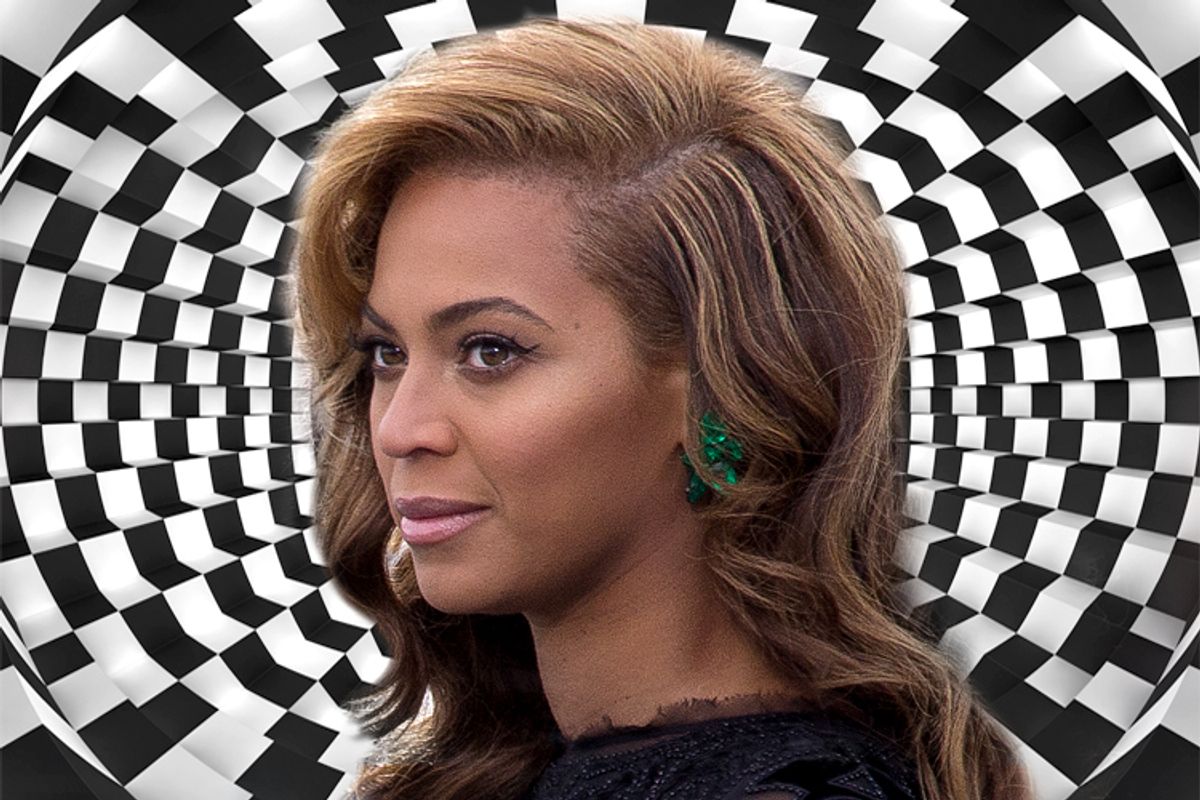 Beyoncé’s had an unexpectedly tough spin in the news cycle after her universally acclaimed Inauguration performance was revealed to be a lip-synch job.

But it’s hard to believe that the pop singer, who is preparing for the Super Bowl halftime show, hadn't already heard it all. After all, an entire corner of the Internet believes her daughter is the Antichrist.

Beyoncé and her husband, Jay-Z, are just two of the popular music stars whose ties to the so-called Illuminati have come in for Zapruder-level scrutiny online, on sites like Vigilant Citizen, Media Exposed, and, yes, Beyonce-Illuminati.com.

The fear of the entity known as the Illuminati is neither unique — Bey and Jay join Lady Gaga, Rihanna, Ke$ha, Kanye West, and practically every prominent banker and politician on Earth is under conspiracy theorists' microscope — nor novel. The original Bavarian Illuminati, a short-lived Enlightenment group devoted to overthrowing the local government, would likely have been forgotten, said "Occult America" author Mitch Horowitz, had Scottish physicist John Robison not speciously alleged in 1797 that the group had infiltrated the Freemasons and instigated the French Revolution.

"The Illuminati can be understood as the most radical edge of the marriage of avant-garde religious views and political views that sometimes found expression within Freemasonry," said Horowitz. The movement, as redefined ex post facto to include practically every threatening and new development in American life, went on to resurface in rumors from the anti-Masonry fervor of the 1830s to the election of a Catholic president in 1960 to (did you need to ask?) the Obama presidency. Though the political goals of the Illuminati in Bavaria were locally minded, the avant-garde aspect lives on. Horowitz listed certain motifs: "skulls, serpents, eyes and pyramids, pentagrams. These were from a religious culture that had vanished after the Dark Ages; they're alluring, dangerous, sinister."

And indeed they were alluring to everyone from the designers of the Great Seal of the United States (check out that to, if you trust the Internet, just about every pop star). But that doesn't signify that every pop star has joined a nebulously defined group bent on world domination. "The eye and pyramid still makes people pause when they see a dollar bill. An artist like Jay-Z understands that," said Horowitz.

"He flashes an image of Mao Tze-Tung in [the video for] 'Run This Town,' but no one suspects he's an agrarian socialist."

Here are a few of the accusations waged against Beyoncé and Jay-Z:

Enough, for now! Taking a broader and more systematic view, conspiracy theorist and YouTube documentarian Mark Dice said, "These symbols represent power. And the Illuminati is the ultimate powerful organization. These scumbags like Jay-Z want that power. Their whole message is that of materialism.

"They assign the meaning, and they have secret meanings for the initiated. The pop stars are Illuminati puppets. I call them Satanic skanks."

Dice clarified that he did not believe that celebrities are hypnotized into delivering Illuminati-approved messages, as some other conspiracy theorists do (though he took umbrage at Jay-Z's appearing on behalf of Obama during the presidential campaign: "What's his message? Is it a message of love and respect? No, he's a former drug dealer popping Cristal. Go pop your Cristal!").

Said Dice: "They're just spokesmen. These people don't even write their own songs."

If you’re looking for evidence that a worldwide conspiracy exists but can’t quite fit together global politics and the Bilderberg Group, why not pin as useful idiots the pop stars whom everyone knows? People reflexively distrust celebrities, anyway, so half of the conspiracy theorist's work of convincing is already done.

The celebrities fan the flames a bit, too. “I said I was amazing, not that I'm a Mason / It's amazing that I made it through the maze that I was in,” rapped Jay-Z, acknowledging the case against him even as his fans throw up a sign that conspiracy-minded folks allege is that Masonic "eye inside a triangle." Beyoncé’s one-eyed shoes seem like a fairly deliberate provocation given a portion of her audience’s fixation on Masonic symbolism. Beyoncé and Jay-Z may be setting themselves up for critique, and examination, and obsessive documentation.

Hollywood's role, in theorists' minds, is to disseminate messages of “extreme materialism, spiritual vacuosity and a self-centered, individualistic existence” to placate the masses, says anti-Illuminati site Vigilant Citizen. Then again, some people just call that pop culture! The involvement of pop culture just bolsters the "superconspiracy" aspect of the Illuminati, said end-times expert and academic Cathy Gutierrez, of Sweet Briar College. "It's not just a conspiracy against the Bavarian government, now you're friends with the Rosicrucians, the Elders of Zion, the underground Jewish money funding all of this." There's a comfort to this sort of thinking, said Gutierrez, rather like believing in God: "It does protect things from just happening. It's kind of a big plan."

Indeed, prominent conspiracy theorist Dr. Henry Makow wrote in an email to Salon, "The ultimate goal of the Illuminati is to morally degrade humanity as a way of inducting humanity into their cult at the lowest level, and enslaving it mentally and spiritually, if not physically." He specifically bemoaned "feminism, homosexuality and gay marriage" — using pop stars as a scapegoat for the sexual revolution, which had an evil hand guiding it.

And so in bemoaning the materialism and oddity and sheer modernity of the modern world, conspiracy theorists connect the loose conspiracy that began in Bavaria outward to Beyoncé and many, many other artists. These pop stars play along, ranging from artistic expression that’s strictly for the initiated (Lady Gaga took a break from citing Warhol to stage a death-themed performance in a Masonic temple at the VMAs) to explicit jibes intended to go viral (the “Princess of the Illuminati” text that flashes over Rihanna in her “S&M” video).

And sometimes it just looks like careerism. Last year, Ke$ha’s first pop video after a brief absence was “Die Young,” featuring such explicit nods to Illuminati fixations that even MTV was moved to comment. And Madonna rode into her Super Bowl halftime show wearing ornate, devilish horns. Both the Ke$ha video and the Madonna show got mixed reviews, but they’ve kept a certain audience talking: maybe the real Illuminati in pop music is a group of musicians who’ve figured out the kind of symbolism that boosts your Google hits -- and that's amusing enough for those who are casually observing.

Asked what she thought of pop stars' potential ties to a group that sought to instate a New World Order, Dr. Gutierrez replied: "Lady Gaga? I can imagine worse people running the world."