"American Horror Story": What is Lana capable of?

The finale was more emotional than "Parenthood's," as the second season closes with tears — and possibly a twist 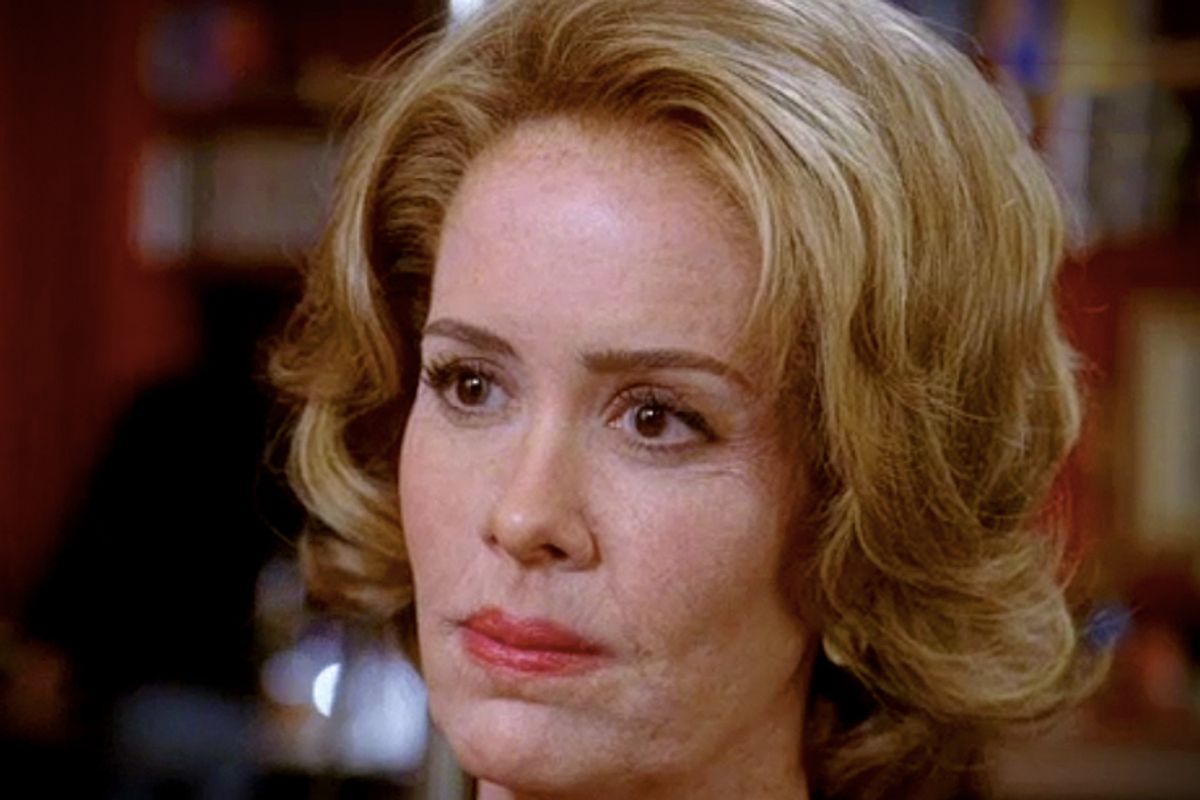 If I had made a bet on which season finale would make me cry more, “Parenthood’s” or “American Horror Story’s,” I would have lost some money. “American Horror Story” wrapped up its wonderful, gross, twisted, funny, banana-fanna full second season with a surprising amount of sentimentality and a twisted happy ending, which is not how horror stories usually wind up.

The finale began in the present day. The mercilessly ambitious Lana Winters (Sarah Paulson, in elegant old-age makeup) has become a sort of grand dame of TV journalism, a lesbian Diane Sawyer who pals around with Bono. Winters made her career not with the trashy memoir “Maniac” that we learned about last week, but later in the ‘70s with an exposé on the depraved, disgusting conditions at Briarcliff. In the finale, she is taping a TV interview for the Kennedy Center, and as she talks, she flashes back to what has happened since the release of “Maniac” to herself, to Jude, to Kit, to the Monsignor, while her fully grown, serial-killing son Johnny (Dylan McDermott) bides his time, pretending to be part of the TV crew, waiting to kill her.

Paulson is not the face of “American Horror Story”; Jessica Lange is. She has been, well, Jessica Lange this season: Her presence in “AHS” has been a perfect meeting of aging movie star and material, meta but not just meta, her history imbuing her performance with an innate halo-effect, the past constantly superimposed on the present to highlight Lange’s gameness, her still-got-it-ness. But if Lange embodies something fundamental about the spirit of “AHS” (aging in Hollywood: Now that’s an American horror story), Lana is this season’s protagonist, its knottiest character, its terrorized, ambitious, rapacious, maybe-heroine. As Lana, Paulson has been flat-out fantastic, somehow making the exhausted, broken woman who was raped, forced to do homosexual aversion therapy, and self-administer coat hanger abortions seem continuous with the driven and manipulative career woman she is when out of duress.

Last week, Lana appeared to revert to the single-minded, closeted social climber she had been before her wrongful institutionalization, a memoir-embellisher obsessed with her own career, callous about Jude’s fate, in it only for herself. But in the finale, we were reminded that Lana is no simple striver, but an exceptionally intelligent, self-aware and occasionally feeling one. Lana’s experience in Briarcliff did not change her fundamental nature, but it did reveal that nature to be voluminous, just as it did for the other characters on “American Horror Story: Asylum,” especially if they were women.

Consider the characters this season who have been either simply good or bad: They’re all men. There’s Kit, alien-anointed and pure of heart, and there’s Dr. Arden and the Monsignor, hypocritical, weak evildoers. Meanwhile, the women have made a hash of conventional morality, containing multitudes — or, in one case, the devil. There’s Grace, ax-murdering yet loving; Sister Mary Eunice, innocent but possessed; Lange’s Sister Jude, the merciless believer doing her best, but a best that includes unfathomable cruelty, only to have unfathomable cruelty visited upon her in return; and Lana, resourceful, traumatized, a victim and a victor, a survivor by any means necessary. With these parts, Ryan Murphy has, with what appears to be no trouble at all, assembled some of the juiciest, most interesting roles for women currently on television. It’s no wonder Paulson and Lange are coming back for a third season — it looks like fun.

In the finale, Lange’s Sister Jude got the full happy ending, while Lana got the twisted — or maybe the very twisted — one. Murphy wrote Lange a four-hanky send-off: Kit rescues Jude, rehabilitates her, and lets his alien-influenced children cuddle up and call her Nana. Jude dies, but at peace. Just as in the first season of “AHS,” which left the ghosts of the Harmon family content and decorating Christmas trees, death can be really sweet.

And then there’s what happens with Lana. What did, exactly, happen with Lana? After the interview is over, she finally confronts her son, who yells about his father for a while before pulling a gun on Lana and pointing it at her forehead. With what appears to be all emotion, but is actually all ruthlessness, she talks him out of using it. “It’s not just him that’s in you,” she says, soothingly, as she takes the gun, “I’m a part of you too,” which at first seems like a comment on her humanity, but is actually a comment on her heartlessness. She puts the gun to his head, and kills him.

We then flash back to 1964 and a conversation between Jude and Lana, their very first, when Lana was still a reporter trying to get dirt on Briarcliff. It is all about the depths of Lana’s ambition, how far she will go to achieve her goals: “You don’t have any idea what I’m capable of,” she tells Jude. Jude talks about looking evil in the face — and there’s a close-up on Lana’s face. What follows may be a bunch of overthinking conspiracy-theory bologna — actually, it definitely is — but bear with me as I chomp through it: It seems to me there’s a whole continuum of possibilities raised by this scene, a last-minute reminder of how absolutely cutthroat Lana has always been.

The most extreme interpretation of this scene is that it suggests some of what we’ve seen this season has been fabricated by the insanely ambitious Lana. There are some events that are corroborated in the finale without Lana’s say-so — the Monsignor existed, so did Arden, so does her son, she made a real TV documentary about the horrors of Briarcliff in the ‘70s — but very little else is. Threadson, Jude and Kit are all dead (or maybe abducted), and Lana could have embellished or made up everything that went on between them at the asylum and after, up to possibly killing all those people herself: She did know how to get out of Briarcliff. Maybe she’s the one who has passed on the killer DNA to Johnny — “I’m a part of you too.”

I think that’s probably too extreme (and easy to punch holes in: Why all that hullabaloo last week about parts of the memoir being made up, if it all was, for example?). Certainly, I like Lana, and Paulson’s performance, so much I would rather think of Lana as ambitious-beyond-manners, rather than ambitious-enough-to-kill-people. The least extreme interpretation would be that the final scene is just a coda on hindsight. Lana really did have to be capable beyond imagining to survive what happened to her over the decades. I'm inclined to think the scene implies something slightly more sinister, just because it felt more sinister: But it could have been intended to remind us how mercenary Lana has always been. Everything that we saw happen happened and the situation at Briarcliff spun wildly out of control, but some part of Lana has always been seeking out the horror, so she could get the story.

Whatever you think the final scenes suggests, it certainly showed how little Briarcliff altered Lana: She was coldblooded when she went in, and decades later, she's still coldblooded, the kind of woman who would rather shoot her sobbing son in the head than wait for the police to come. But he was a serial killer who had already slaughtered five people, so maybe she had a point. Lana’s ending was the vinegar splash on a large serving of Sister Jude’s Happy Ending Ice Cream, which is actually a dessert served at some restaurants now. Looking forward to another big bowlful next season.