Pick of the week: Exorcists, zombies and bromance, oh my!

Campy B-movie farce and an ominous allegory in one, "John Dies at the End" is an inventive, crazy genre-bender 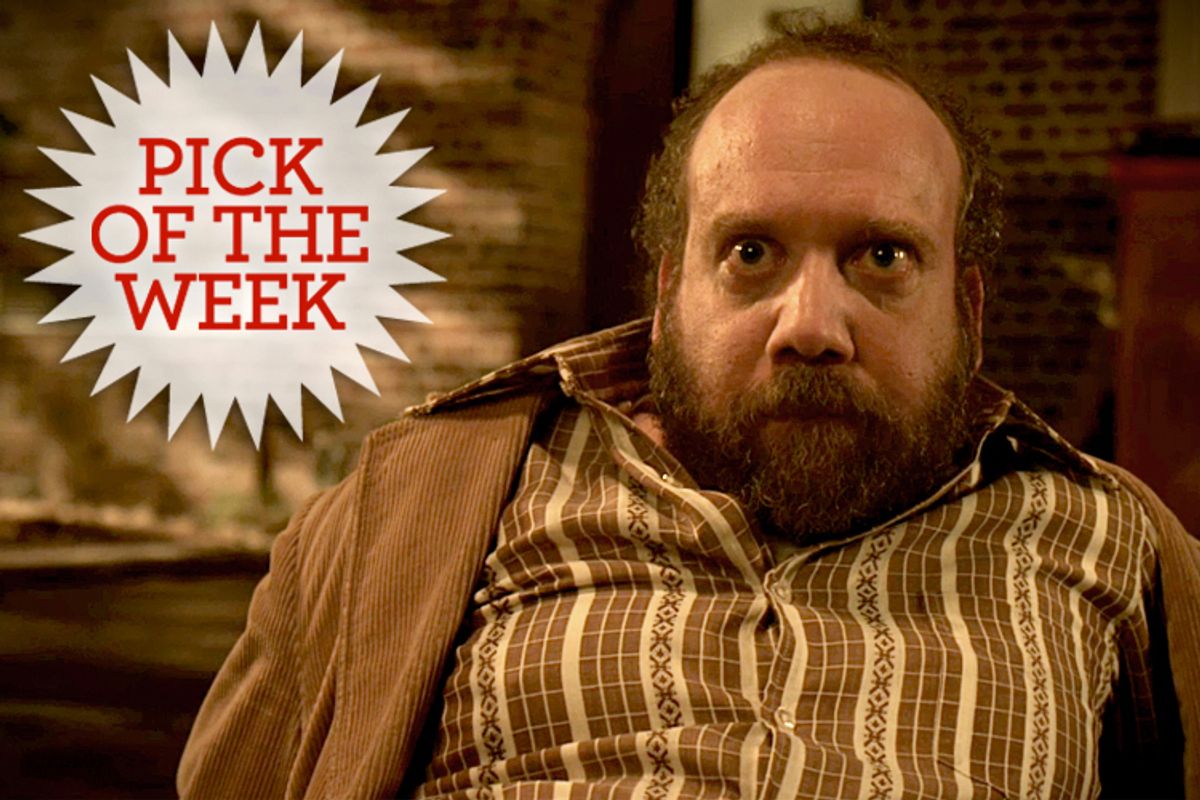 Paul Giamatti in "John Dies at the End"
--

I come to bury “John Dies at the End,” not to praise it. Of course, after burying it I’ll dig it up again, replace its head with a frozen turkey and send it, staggering and undead, to batter down your door in the middle of the night with a bloody shovel. So lend me your ears, detached from your head.

One thing that Paul Giamatti said in our conversation about Don Coscarelli’s crazily inventive horror movie (adapted from a similarly nutso novel by David Wong), which Giamatti appears in and helped produce, is that the film’s mode is “excess.” That’s both true and not true. Coscarelli throws us into the middle of a bewildering story about two small-town exorcists who are battling extra-dimensional invaders while addicted to a mysterious street drug called “soy sauce” that alters time, space and human perception and seems to be a parasitical organism with its own agenda. And even before that, the movie begins with a gruesome and hilarious philosophical puzzler, a kind of shaggy-dog anecdote that has nothing to do with the so-called story. (For the record, my answer to the vengeful zombie’s unanswerable Zen-koan question is yes.)

But this is all happening within what feels like the straight-to-video universe of a low-budget zombie flick, complete with special effects done on the cheap – including the already legendary Meat Monster, comprising the contents of a freezer case, assembled into a quasi-bipedal “manifestation” -- glib bromantic banter between the 20-something male leads and an array of comic stereotypes in the supporting roles. Those include Giamatti as a pudgy, cynical journalist who isn’t what he seems to be and Clancy Brown as an unctuous TV mystic who may or may not be the plaything of intergalactic evil, along with a Jamaican psychic-dealer type named “Robert Marley,” a laconic black detective straight from the Morgan Freeman playbook, a street-talking white kid tasked with opening the gateway to other dimensions and a heroic dog named Bark Lee.

In other words, “John Dies at the End” deliberately tries to blur the distinctions between categories that we pretend don’t exist anymore, but that still divide popular entertainment into warring camps. Is this an “indie” film with a deliberately messed-up chronology and an ambitious narrative you’ll appreciate even more the second time through? Yes. Is this a deliberately trashy horror-comedy with a few decent jolts and several big laughs, best viewed with a gang of friends and a consciousness-altering agent of your choosing, parasitical or not? That too.

The key thing here is that I’m not telling you to think this movie is any good if you don’t think this kind of movie is any good. Like Coscarelli’s peculiar “Phantasm” horror franchise, an incomprehensible fairy tale about an interdimensional grave robber and slave trader armed with flying metal spheres full of spinning razor blades, which stretched across four films and 20 years without ever becoming massively popular, “John Dies at the End” has a self-limiting audience. A self-limiting audience of geeks; let’s just put that out there.

Coscarelli told me he thinks of his movies as “intelligence tests,” which is a sure way to endear himself to people who think they’re junk, isn’t it? If you liked “Donnie Darko” and David Cronenberg’s “Naked Lunch”; if you enjoyed “Scott Pilgrim vs. the World” and Michael Haneke’s early films – and the underappreciated third film of George A. Romero’s zombie trilogy, and Zack Snyder’s “Sucker Punch” – well, then I think you’re good with “John Dies at the End.” (You might have to admit that you kind of liked Guy Ritchie’s idiotic work of Madonna-informed mysticism, “Revolver,” and you certainly have to be excited about Giamatti’s upcoming role in Ari Folman’s “The Congress,” adapted from a novel by Polish sci-fi cult hero Stanislaw Lem.) Like I say, self-limiting.

I guess both Wong’s book and Coscarelli’s movie feature the ultimate spoiler title. Except that John (Rob Mayes), the ladykilling charmer half of the ghost-busting central duo, dies closer to the middle than the end – it’s just that cellphone calls he made while alive keep reaching his buddy Dave (Chase Williamson) long afterward, sometimes via bratwursts and other non-electronic objects. Oh, crap – I wasn’t supposed to say that, was I? Well, don’t worry, because the basic causality of the time-space continuum is very much in question when you’re on soy sauce; the distinction between past and future gets blurry and death doesn’t seem to be permanent. As John murmurs dolefully to Dave, not long before his demise, “I’m so sorry about all the things that will happen! All the people who are gonna … explode!”

Quite a few people explode, and the detached, wisecracking Dave can’t do much about it. (Like the author and narrator of the novel, Williamson’s character is named David Wong, but is not Asian. Wong is actually the long-running pseudonym of Jason Pargin, an editor at Cracked.com and noted Internet humorist.) Coscarelli has embraced the impossible task of turning Wong’s self-conscious narrative voice, and the book’s hallucinatory flow of incoherent images and disconnected adventures, into something approximating a 100-minute movie with characters and a story.

Something is most certainly lost in this translation – the book, while wildly uneven, is also heavily literary and self-referential, resembling in its best moments an attention-deficit mashup of Stephen King and Flann O’Brien. Unquestionably, the movie gets a bit less interesting and fun as it behaves more like a normal, if ridonk-ulous, science-fiction narrative, in which our heroes must go through the dimensional portal in the Mall of the Dead and confront the Alien Whatsit who yearns to devour our planet. Because who really cares about that at this point? We’re all screwed anyway.

But plenty is gained too, including what may be the most freewheeling and imaginative film of Coscarelli’s checkered career, loaded with tripped-out mood and nicely balanced between humor, horror and an underlay of genuine sweetness. Coscarelli has evidently never had the right blend of craftsmanship and salesmanship to translate his particular rarefied B-movie aesthetic into a mass phenomenon -- but he has also never failed to treat his modestly sized and admittedly strange audience with respect, and has always operated on the assumption that people who enjoy gruesome and outrageous scenarios are also open to adventurous storytelling. With the horror genre showing more signs of life than at any time in the last 20 years or more, and guys that Coscarelli clearly influenced, like Joss Whedon and Zack Snyder, near the top of Hollywood’s A-list, “John Dies at the End” suggests that Don’s got plenty of life in him yet.

“John Dies at the End” is now playing at the Nuart Theatre in Los Angeles and opens Feb. 1 at the Sunshine Cinema in New York; Feb. 8 in Chicago, Dallas, Philadelphia, Portland, Ore., San Francisco and St. Louis; Feb. 15 in Cleveland, Denver, San Diego and Columbus, Ohio; and Feb. 22 in Boston, Greensboro, N.C., Houston, Seattle, Tucson, Ariz., and Austin, Texas, with other cities to follow. It is also available nationwide on-demand from cable, satellite and digital providers.