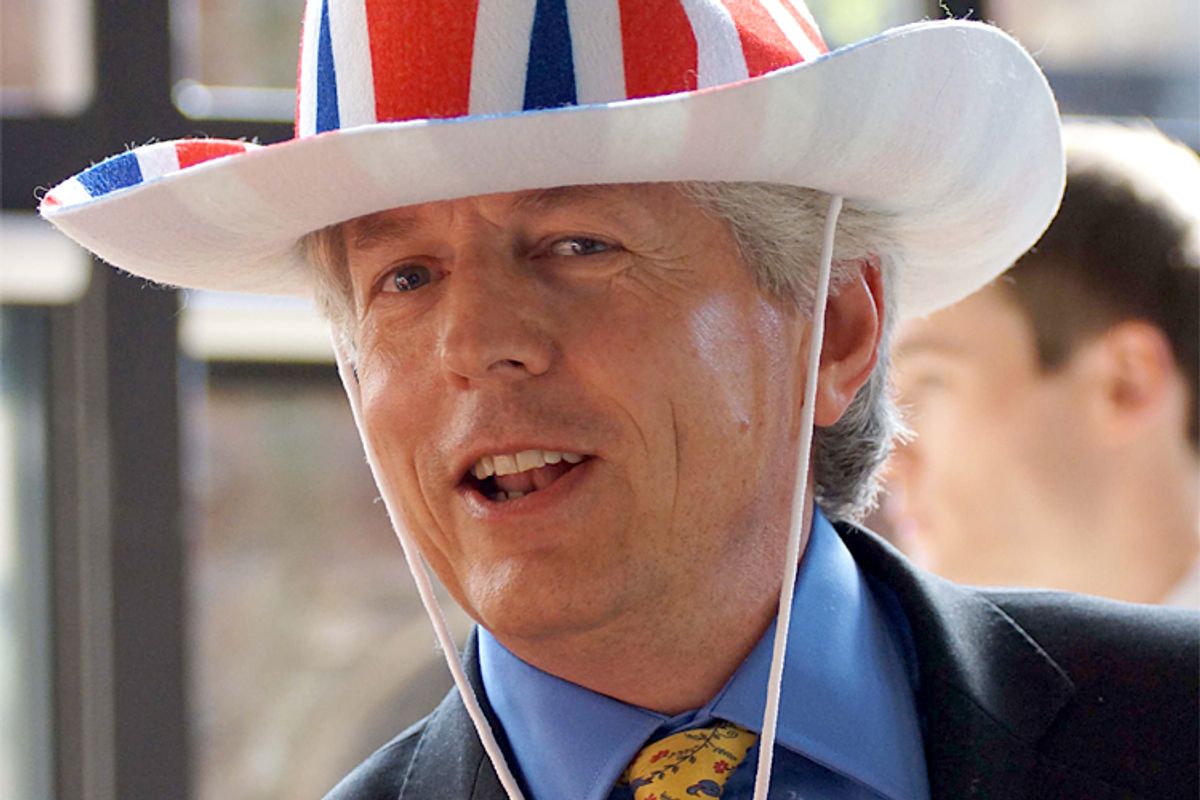 Sorry for the backlash, sir. But when you walk around with your mouth open and sweeping generalizations come out if it, what do you expect to happen? In a tiresomely familiar scenario this week, yet another conservative decided to spout off some less than sensitive, middle-aged white man opinions about sexual violence against women. This time, the only twist was that it happened in the U.K.

Gloucester's Tory MP Richard Graham has made waves this week for saying, "If you are a young woman on her own trying to walk back home through Gloucester Park early in the morning in a tight, short skirt and high shoes and there's a predator, and if you are blind drunk and wearing those clothes, how able are you to get away?" In response, Trustee of Rape Crisis England and Wales Jo Wood said Graham's comments had "set us back about 100 years," while a spokesman for Gloucestershire Rape Crisis Centre accused that they were "stimulated by desire to humiliate and degrade" women. And Gloucester's Labour council leader Kate High is now organizing a Slut Walk event through the city, because, as she says, women "should be able to go out, wearing what they want, and feel safe."

Amazingly, the whole kerfuffle started when 66-year-old Joanna Lumley – yes, the woman best known for playing "Absolutely Fabulous" perpetually falling-down drunk Patsy Stone — gave an interview to the Telegraph in which she advised young ladies, "Don't be sick in the gutter at midnight in a silly dress with no money to get a taxi home, because somebody will take advantage of you, either they’ll rape you, or they’ll knock you on the head or they'll rob you."

Believe it or not, many of us vagina owners are aware of our personal safety and try to protect it. Broke and puking in a gutter is a course of action few of us would consider a great move – even if many of us have at one time or another been there. It's fine to advocate for common sense and avoiding high-risk situations. As Barbara Ellen sagely explains in the Observer, it's true that "the world is a dangerous place," but "there is a big difference between meekly accepting rape as a female burden and being practical and proactive about the fact it exists." The problem wasn't that Lumley doesn't want women out late at night with no way home – anyone who cares about personal safety wouldn't want that — it's that Lumley's language was so accusatory and "dodgy."

Graham, meanwhile, has responded to criticism of his remarks by doing swift and inevitable damage control -- citing a female family member's rape and stating, "I owe it to her and all my female constituents never to take this issue lightly." He now says, "I stressed the issue was about risk management, about being aware of what behavior or clothes might put you more at risk and less at risk. Risk management is a million miles from saying anything like 'she was asking for it'. As the father of a 20 year-old daughter I rightly have strong views both on the importance of risk management and the hideousness of rape."

And yet, when helpful advisers like Lumley and Graham talk about "risk," there doesn't seem to be any acknowledgment of some of the other risk factors of rape. For example, what is likeliest to cause a sexual assault: a) a short skirt? b) high heels? Or c) a rapist? The answer is: c. So why is it that in far, far too much of the public conversation about women and sexual assault, the onus of responsibility falls on the potential victim instead of the assailant? I'm all for carrying extra cab fare and a spare pair of shoes you won't land on your face in. But there'd be a whole lot less exasperation and outrage every time some public figure starts gassing on about tight skirts if someone also happened to throw in a line or two to the effect of, "Hey, guys, don't assault or rape anybody." It'd be cool to have some acknowledgment that the leading cause of sexual assault is still sexual assailants.

In the firestorm over Graham's comments, it was the Gloucester Chief Inspector Richard Burge who wound up having the most reasonable response. "We would appeal to everyone not to drink so much you don't know what's happening," he told This Is Gloucestershire. "Excessive alcohol can make you vulnerable, so stay with friends and if you are with a friend, try and look out for them too." Everyone. Women. Men. No undue burden on the ladies as guardians of male impulse control. Just basic common sense, with no unnecessary victim-blaming, no mention of short skirts. It's just that simple.