Chris Brown gets in brawls with everyone. And now — color me OMG — he's into religious self-portraiture 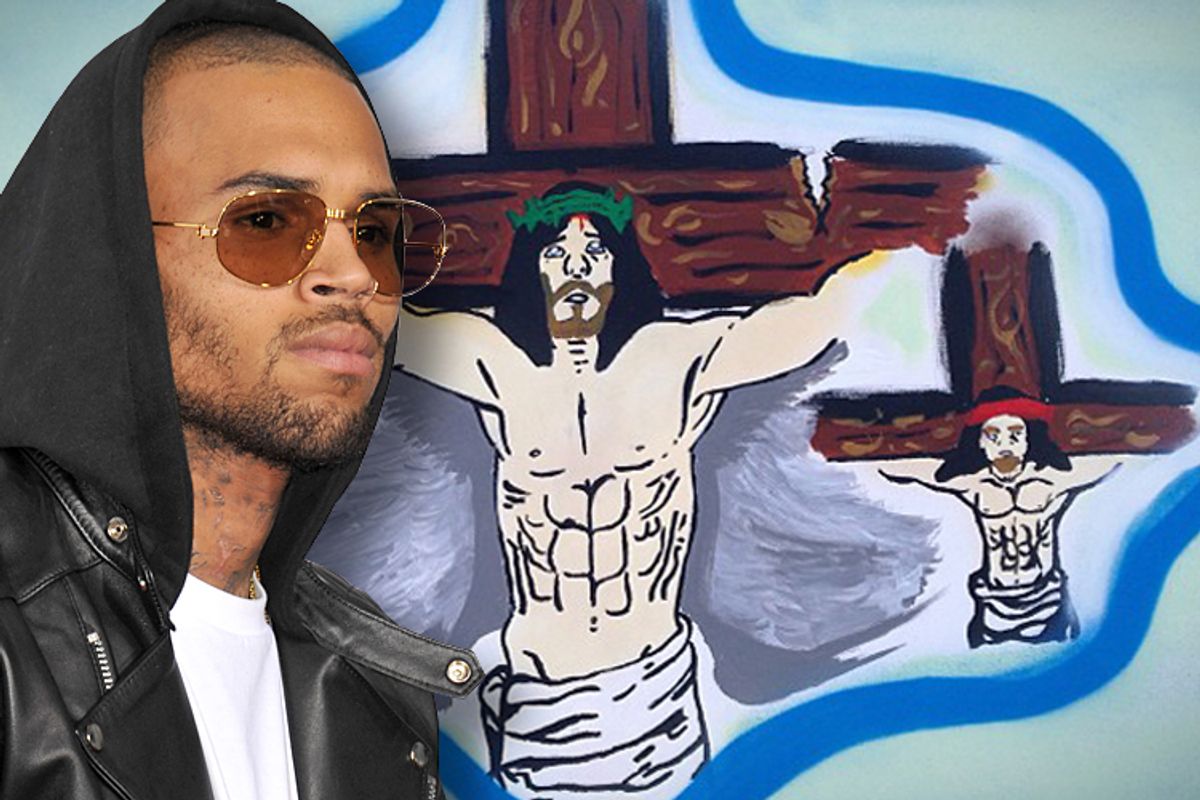 Oh, did Chris Brown get in a fight again? Yawn. Does he have a ridiculously overblown sense of his own victimhood in all of it? You don't say. In fact, you could call the parking lot altercation between Brown and Frank Ocean this weekend Just Another Day in the Life of Chris Brown were it not for one thing that makes the story truly, truly special. It's the Jesus painting. BEHOLD.

Whatever went down between Breezy and Frank Ocean that led Ocean to be "desirous of prosecution" will never be anything more than another tale of Brown's legendary tantrum tossing. Since his 2009 assault on Rihanna — for which he's still on probation— Brown has pitched a fit on the set of "Good Morning America" and mixed it up at a nightclub with Drake. But did you know that the Grammy-winning convicted felon is also an artist? A sad, tortured artist, natch.

On Monday, Brown posted an image on his fuckyopictures Instagram account. The caption read, "Painting the way I feel today. Focus on what matters!" And would you like to know how Chris Brown feels? Chris Brown feels like a long-haired white man with tremendous biceps.

That Brown boldly compared himself to Jesus Christ has been mentioned already in a few of the news stories following up the weekend incident with Ocean. USA Today noted his "Jesus on the cross" and the Hollywood Reporter casually mentioned "a crucifixion scene." It's been reported as if it's just another of example of Chris Brown's unusual state of mind. And yes, for the man who gave us "Poppin" to compare himself to the man who gave us Christianity is a bit of a stretch. But it's like the press didn't even see the painting. This thing. It's amahhhhzing.

The multi-hyphenate Brown's love of painting isn't some new, post-Frank Ocean–motivated flight of fancy. He's been creating his graffiti-inspired works for a while now, and had his first gallery show last year. But his crucifixion scene shows his journey from his earlier themes of Angry Hello Kitty to his more recent Madonna-and-child-focused work. In it, a startled-looking Jesus gazes from a cracked cross, a green crown of thorns on his head, his lower arms and hands unfinished. His hair is black. His beard is brown. He is flanked by the two thieves of biblical fame, both of whom sport red, um, bandannas I think. A sea of cloudy gray swirls between the three. They are enveloped in a bright blue outline thingy. Maybe it's not quite a Rubens, but did Rubens ever release a single with T-Pain? OK, then. The painting currently has close to 60,000 likes, and after I gazed at it just once, my astigmatism was instantly cured and I think I got pregnant.

If this image were on a T-shirt, Three Wolf Moon would run howling out of business. If this were on the ceiling of the Sistine Chapel, the Vatican would be like Coachella every day. It's perfection. The only possible way it could get better would be if Cecilia Gimenez now tried to "restore" it. Come on, Chris Brown. You've collaborated with Lil Wayne and Ludacris. You may still have your anger issues, but your artistry cannot be denied. Now the world cries for a remix – and we won't be satisfied until there's a Potato Chris Brown Jesus.