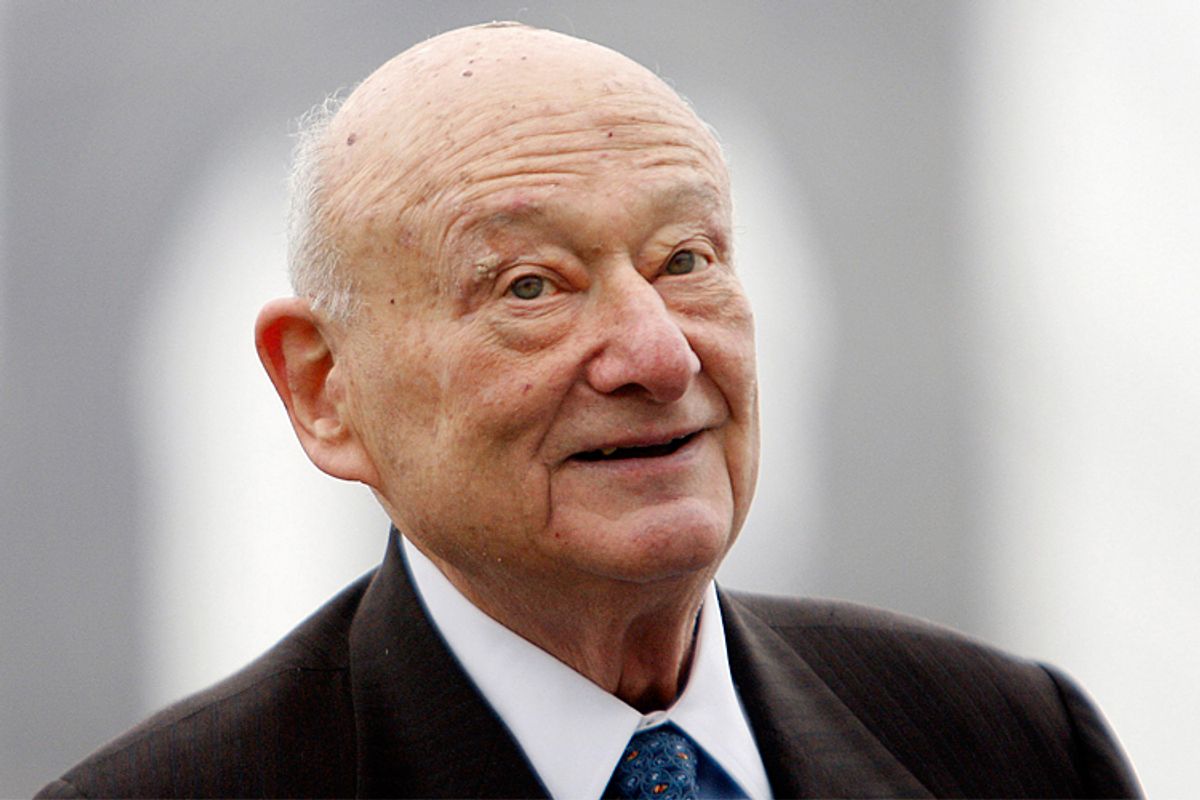 He was the larger-than-life mayor of New York through some of the most colorful and changeable years of the city's history. Ed Koch, who died early Friday morning at 88, presided over the Big Apple through the era of the Central Park jogger, Bernhard Goetz, Black Friday and gentrification. He was the mayor of punks and club kids and debutantes, of the Gordon Geckos and the young Madonnas. He was, most of all, the mayor during the AIDS crisis. And as much as he is remembered for all the things he did, he'll go down in history for all the things he didn't do, at the moment action was needed most – and for the lingering questions of why.

Koch, a lifelong bachelor, was the subject of intense rumors about his sexuality his entire career. More recently, Kirby Dick's 2009 film "Outrage" accused Koch of not merely being closeted, but of sabotaging those who threatened to expose him -- and that Koch had a lover, Richard Nathan, who was exiled after he became mayor. Nathan later died of AIDS. The brand-new film "Koch," which opens Friday, echoes the charge of closetedness, featuring activist Ethan Geto declaring, "It would have been so incredibly invaluable for a popular mayor of New York to declare he was gay."

In his later years, Koch, who'd previously asserted his heterosexuality, refused to answer questions about it, saying, "I do not want to add to the acceptability of asking every candidate, 'Are you straight or gay or lesbian?’ and make it a legitimate question, so I don’t submit to that question. I don’t care if people think I’m gay because I don’t answer it." And in 1998, Koch told New York magazine, "The fact is, I did more on AIDS, and more to promote civil rights for gay people, than any other mayor in the country."

Koch did, in fact, introduce anti-discrimination bills and appoint openly gay staffers, and he was the first New York mayor to march in the Pride parade. In 1983, he created the city's Office of Gay and Lesbian Health Concerns. But its "first comprehensive AIDS plan" did not come until five years later. "[Larry] Kramer’s thrust was that I was afraid that if I showed concern, people would think I was gay," he said. "He wasn't the only one who said that, of course. Listen, there’s no question that some New Yorkers think I’m gay, and voted for me nevertheless. The vast majority don’t care ... My answer to questions on this subject is simply,' Fuck off.'"

And so, his New York Times obituary decorously does just that on the issue by noting, "Perhaps inevitably there were rumors, some promoted by his enemies, that he was gay. But no proof was offered." It also makes a single light, passing mention of "the scandals and the scourges of crack cocaine, homelessness and AIDS." And in a recent examination of the mayor's legacy on AIDS, Times writer Ginia Bellafante notes that Koch didn't work in a vacuum, and that the early years of the AIDS epidemic were marked by widespread confusion and mismanagement at both the city and national level. She also declares that he was, ultimately, "slow to respond to the crisis, slow to educate the public."

Thirty years after the heyday of Edward Koch, New York City is today run by another doesn't-give-a-damn bigmouthed bachelor. But the heterosexual-to-a-fault Mike Bloomberg, for all his administrative shortcomings, has been a persistent and vocal advocate for LGBT rights. He's dug into his own deep pockets to support same-sex unions in other states, and as soon as it became legal in New York, he eagerly volunteered to preside over a gay staffer's nuptials. Imagine what a guy like that could have achieved if the AIDS crisis were blowing up now instead of then.

Last fall, Koch reviewed David France's AIDS documentary "How to Survive a Plague," calling it "superb" and saying, "I urge President Obama to do so by presenting them and other leaders recognized by Act Up [sic] with the Presidential Medal of Freedom." He never mentioned that ACT UP was founded in New York City during his own tenure, or that it came about because of "outrage" at "the government's mismanagement of the AIDS crisis." Larry Kramer, meanwhile, has said, "I had to try and get Ed Koch on the telephone to get an office for Gay Men's Health Crisis in New York City, and I was made to feel like, just who the hell are you? It made me very angry, and it was actually that anger that propelled me more than anything." By 1989, the year Koch left office, nearly 30,000 New Yorkers had been diagnosed with AIDS.

If you lived through the worst ravages of the AIDS crisis years, you recall the battle cry of those years, the fury over indifference that it evoked. Even if you were too young, you should know the devastating toll that AIDS continues to take, the way it just keeps on robbing us of our best and brightest, even now, and why that phrase still matters. Silence equals death. And on the one matter that could have changed so much for so many – including, most likely, himself -- Edward Irving Koch, the brash, outspoken former mayor who was never at a loss for words, went through his life as he ultimately went to his death. Silent.