Our family's week on a food stamp budget 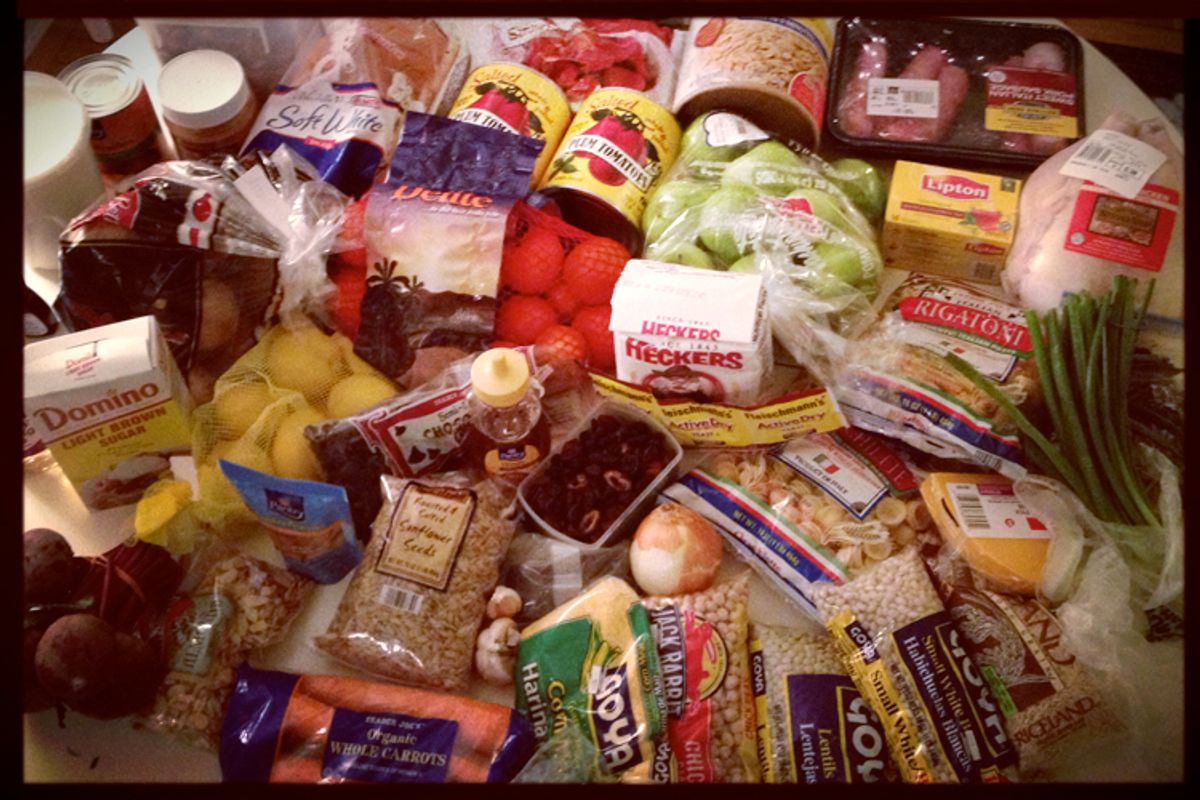 I love to eat. You won't catch me on any diets or purifying cleanses or experiments in going gluten- or lactose-free. I plan meals in my dreams, and put baking ingredients on my Amazon wish list. My idea of going voluntarily hungry is waiting until the previews are over to open the candy. And I'm lucky as hell, because unlike one in every six Americans who don't have a choice in the matter, I don't have to go hungry.

After I wrote about Cory Booker's decision last month to take the SNAP Challenge – to take "a view of what life can be like for millions of low-income Americans" – I couldn't get the idea of it out of my head. The challenge is simple in concept but demanding in its execution: see what it's like to live for one week on a food budget equivalent to your state's Supplemental Nutrition Assistance Program's (SNAP) benefits. Participants can use their existing spices and condiments, but no other foodstuffs, nor they can accept food "from friends, family, or at work." Because I live in New York, I'd have a slightly more generous allowance than New Jersey's Booker got – a total of $36.86 for a week of eating. And because my two daughters are awesome, they said they wanted to do it too as I soon as I mentioned it to them. So for the past week, we've been eating on a little over five bucks a person per day.

We didn't start this because we think our small action is going to change the cruelly paltry food allowances that our states hand out, or make any significant impact in the lives of the 50.1 million Americans living in food-insecure households. The only minute tangible effect of this week is that we're using the savings from our grocery bill to make a gift to the phenomenal City Meals on Wheels. Instead, what we hope for is a lesson in empathy; a reminder that hunger and food insecurity are real issues for our friends and neighbors. On our side of Broadway, the median household income is a modest $51,000. On the other side, it's half that.

And we did it for another reason too. We did it because we wanted to be part of a bigger conversation about how we are feeding ourselves in the country, right now, at every income level. We did it because families aren't eating together enough – or when they are, they're eating in front of the TV. We did it because a quarter of Americans eat fast food every day and half of them drink soda every day too. Even when we eat at home,  nearly half our meals come from "fast food, delivery, or takeout from restaurants or grocery delis." We did it because while millions go hungry, we throw away almost half of our food. Perhaps not uncoincidentally, 60 percent of Americans are now overweight or obese. And a lot of the health problems we are facing could be eased if we got our butts in the kitchen and started cooking.

Somewhere along the way, cooking went from being something that normal Americans just did, on a daily basis, to something we instead watch as a gladiator sport on television. And while it's true that we no longer live in a world where nonna is stirring a pot all afternoon and the wifey is waiting when we come through the door with a drink, this isn't the fault of feminism. It's a fault of indifference. It's a fault of forgetting how important food is. We spend far less of our income on food now than our parents or grandparents did, because it's easy to get food that's cheap and convenient and can be gobbled down in a car.

Not long ago, I was at a party, making conversation with a hospital dietician. I told her I was planning on doing the SNAP Challenge and she told me that she'd done it herself a few months prior. "Do you cook?" she asked. "If you can cook, you'll be fine." Then she told me that most of her colleagues – fellow dieticians – don't even cook. We're losing a basic skill, one that we badly need to nourish ourselves, and one we need to teach our children. Cooking is empancipating. And my kids and I wanted to bust the notions that cooking takes a lot of money, or stupid fancy equipment. (Unless you think a Crock Pot is a fancy thing, it does not.)

My daughters and I spread the shopping and stocking up for the challenge over several days. We bought oranges and potatoes, vegetables and milk and a chicken and some flour. We bought things that are delicious, and you don't need to be a genius to prepare. And when the first day – Sunday – arrived, it came with a flourish and a big stack of pancakes. Over the past few days, I've made soups and sautéed sausages. I've baked bread and made yogurt and jam. I've sent the kids into the kitchen to make chili. These things aren't hard to do. They take a little thought and work, but why shouldn't nourishing yourself take a little thought and work? And what concerns me is that I suspect my daughters and I are eating a more healthy, balanced and pleasurable diet on a food stamp budget that a lot of families with a whole lot more to spend.

It hasn't all been fun and easy. My daughters both have pined for regular old cereal instead of oatmeal or yogurt again. I went out for coffee with my mate and my coffee was a glass of water. I've had to put more effort into each meal, especially as the week has gone on and I've watched our supplies dwindle. But I've done it knowing that for us, this ends on Sunday. And I don't ever want to forget that feeling I had yesterday of wanting to buy an avocado, and being just two cents short. I want my daughters to learn to cook, but more than that I want them to learn to be compassionate, competent young women. I want them to be able to someday feed their own families, and I want them to feed themselves. Extraordinary things are possible when you can do that. Worlds of possibility open up when you know how to eat, because you know how to cook. When you don't need to rip open a box for sustenance. And it's a challenge that's worth taking, every day.