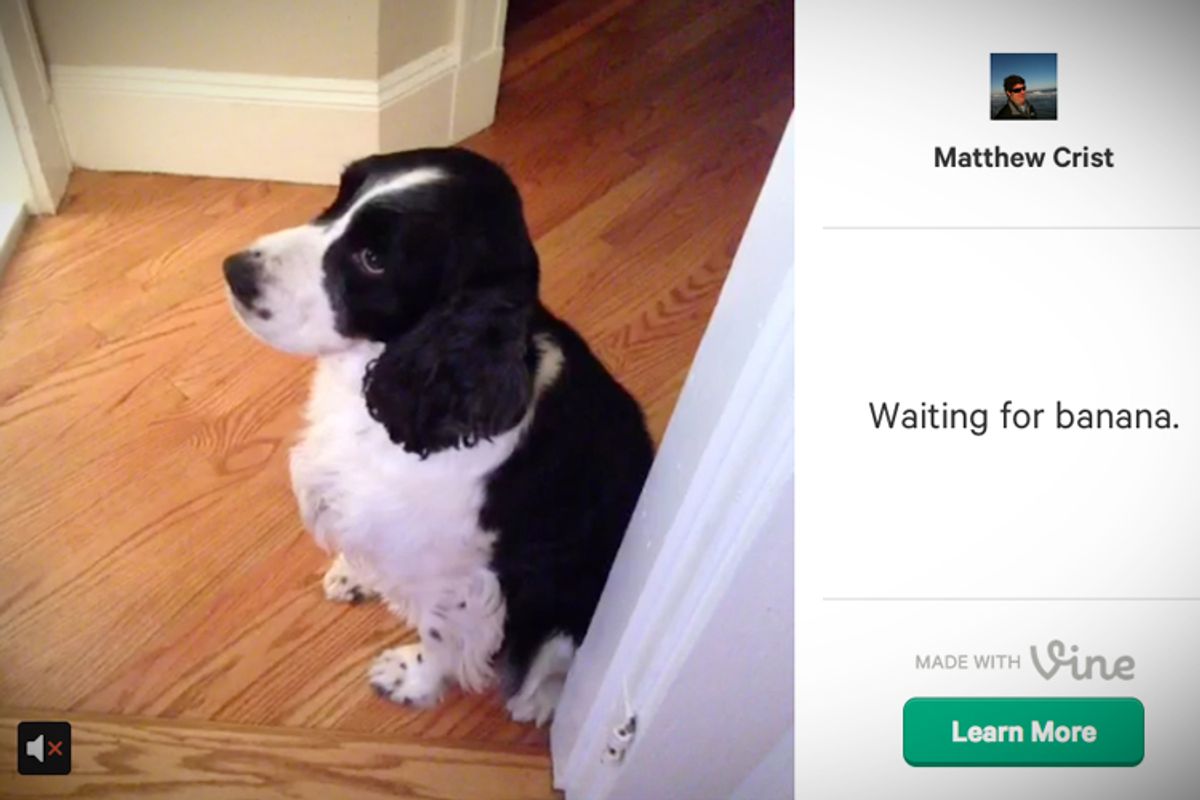 Vine, the six-second video app that launched last week, is in its extreme infancy. Extreme infancy is a fascinating time to look at any new platform. If it’s a fad like chatroulette, its infancy is all there will be; if it lasts like Twitter or YouTube, how it ends up being used will be both tangentially and fundamentally related to how it was initially used. On Vine, everything is new and shiny and hasn’t been done before. Right now, and for a limited time, you can take videos of your food without shame: You’re just seeing how this Vine thing works, after all. Such heady days will not last — and then what will be left?

A quick primer on Vine: It’s an extremely easy-to-use app that allows users to simultaneously shoot and edit very short videos. It’s owned by Twitter, and one way to think about it is as being to video what Twitter is to text: arbitrarily, but perhaps fruitfully, short. (Another way to think about Vine is that it's a program that basically lets you make GIFs of your YouTube videos and share them through your Instagram feed.) You point your iPhone at whatever you want to record and hold your finger down on the screen: The video pauses recording when you pick your finger up, and it starts recording again when you put it back down. You can start and stop as many times as you want within the six seconds, making it extremely easy to do edits and stop-motion tricks as you go. When you’re done, you upload the video, which loops continuously to your feed, where the people who follow you can see it, like it and comment on it.

Of the many things the Internet has taught us, perhaps the most bedrock is that humanity’s major interests are food, the weather, adorable animals and penises. OK, maybe we did not need the Internet to tell us that food, shelter, sex and cats are humanity’s major preoccupations, but we did need it to demonstrate the gargantuan extent of these preoccupations. Left to our own devices and given anything from a conversation to a brand new technology to fill, we will, without fail, fill it with edibles, the outdoors — including but not limited to snowstorms, sunsets, sunrises, climates that contain palm trees, and beaches — pets and private parts. Vine is no exception (this is a pretty good joke). It is full of videos of bananas and oranges peeling themselves, some porn and many mini-animations, some of which are clever and creative and look like they were painstakingly assembled.

Given that we already have lots of outlets for making/seeing videos of food and cats, what's cool, if anything, about Vine? One is that it turns even banal videos into GIFs, the fun, delectable, previously low-tech format that makes everything hilarious that much more hilarious, everything dramatic that much more dramatic, everything ridiculous that much more ridiculous. (What is better than Liz Lemon giving herself a high-five? Her giving herself a high-five into infinity, duh.) GIFs are not that hard to make, but you have to know how to do it and how to get access to the bit of video you want. Vine makes it much easier: If your cat is doing something really cute right now, turn on Vine, and you have your GIF.

GIFs and short animations are a clear point of reference for most Vine users, and you can tell because, as of yet, most Vines are making only incidental use of sound. Vines aren’t silent, but GIFs and the flip-book and stop-motion animations that seem to be influencing most Vines (stuff like this) are. I saw one Vine that used a tambourine and another that made a chorus of drawers banging, but most ignore sound, using just ambient silence. When there is audio, whatever is being heard is usually not as well-edited as whatever is being seen. If Vine thrives, I suspect this will change: Sound is one of the ways that a Vine is a big upgrade on a GIF. What’s better than Liz Lemon making that face when she says “blurgh” into infinity? Hearing her say “blurgh” while she makes that face into infinity.

That said, Vines aren’t just GIFs. The major difference is that Vine users aren't cannibalizing pre-existing video — they aren't recording their televisions, basically — and so Vines feature regular people’s cats, meals and cars, not Liz Lemon’s. Vines are composed of videos users recorded themselves, which makes the service seem friendly and human-sized, but which also curtails Vine's potential as a meme-making tool. (I apologize for typing "meme-making tool" and blame the age we live in.) If it were easier to use other people's videos on Vine, imagine all the rapidly assembled possibilities: George H. W. Bush barfing in Japan over and over and over again; six seconds of “You Betchyas”; all those “Blurghs.” When someone captures something violent on Vine, or a famous person doing something ridiculous — which will happen — that Vine will probably go viral, but it's hard to imagine the same happening for many other Vines, even one of a really cute baby echidna.

One of the most impressive things about Vine is that it is beyond simple to use without feeling dumb or looking bad. Vine has the all-important capacity to make your junky video look pretty great not by relying on a bunch of Instagram-like filters, but on an older trick that anyone who has ever looked through the viewfinder of a real camera knows: Everything looks better, more professional, in a tight frame. It’s the editing capability on Vine that works like Instagram’s filters. That's the aspect of the program that makes users feel like they are craftsmen, not just hacks uploading another picture/video of a delicious bowl of pasta into the ether.

But what’s clear from looking at Vine right now is that most users are not as comfortable thinking in video terms as they are in Instagram's photographic ones. There are not many Vines that are just six seconds of one thing (and the ones that are happen to be some of the most boring, like a scan of the sunset from a hotel balcony). The prevalence of stop motion and flip-book edits means that many Vine users are creating the illusion of motion, for example, of a banana peeling itself, by assembling many still photographs of the subject. (An irony of Vine: It's a new-fangled product on which most people are using very old-fashioned techniques.) Most of us who don't shoot video for a living don't have an instinctual feel for what is interesting or elegant in motion in the same way that we do for what is interesting or elegant in a frame. We don't instinctively know what would make a "pretty" video. Maybe that will change if Vine continues to grow.

Like Instagram, for now Vine is aggressively geared towards in-app usage and personally recorded footage: There are people, mostly famous ones, with a huge number of Instagram followers, but no one who is quite an "Instagram star" in the way that Twitter and YouTube have minted minor celebrities (or at least people like this guy), and I suspect the same will be true for Vine. Right now, the service is only scratching the surface of its potential depth: Users are doing some creative things, but it's nothing on the order of what it could be. Of Twitter's many functions, one is that of an enormous, joke-spewing, clever-observation-making machine, which was not in its initial purview. If Vine can grow out of its "Here is how I cooked my meal in six seconds" phase and if the service makes it easier to use other people's video, then there are plenty of Vines — Vines that make jokes, that notice hypnotic real-life sequences, that goose memes — just waiting to be made. At the very least, it's a brand new dawn for intricate banana jokes.