Science's epic win of a week

Richard III, Mary Ingalls and the Black Dahlia all make headlines thanks to new discoveries 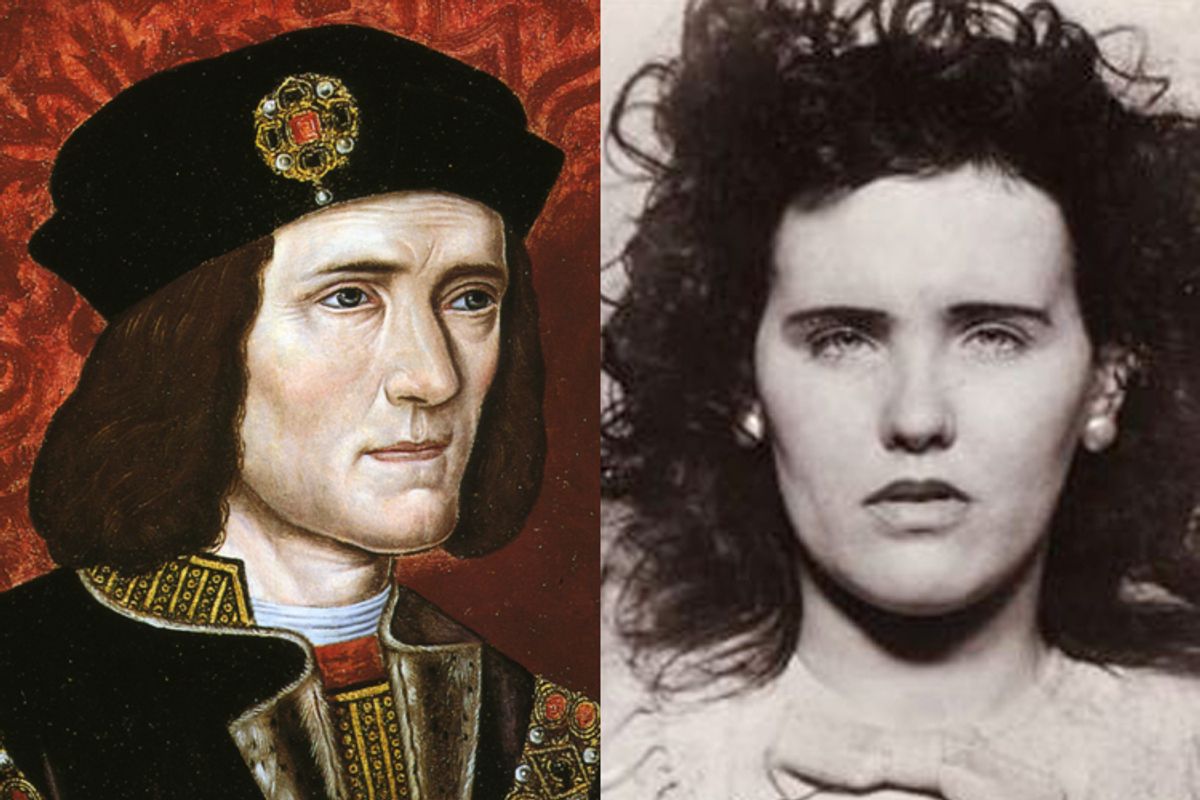 It's still early, but you know who the biggest winner of the week is, by far? Science. Science makes Joe Flacco's week look, eh, OK, and that couple who won the lottery – twice – like they're just doing all right.  Science's week is like Joe Biden's summer of '87, that's how great it is.

First, there was the historic announcement on Monday that the remains of England's notorious King Richard III had been discovered – underneath a midlands parking lot. The story provided fodder for worldwide headlines, a jackpot's worth of memes and a treasure trove of awesome stories within the story on the science behind it.

What aspect of this thing isn't a mind-blower? There's the way archaeologists found the remains in the first place – delving through centuries-old maps and "using ground-penetrating radar" to detect the location of the priory where the king's body was believed to be interred. There's the DNA testing that went into confirming that the skeleton with the cleaved skull and the curved spine really did belong to the last Plantagenet king. Dr. Turi King, of the University of Leicester, compared the samples with those from Michael Ibsen -- a contemporary direct descendant of Richard's sister. It's like an episode of Jerry Springer, 500 years in the making! Ibsen this week described the experience as "a privilege," as well as "surreal." Or, as the History Blog understatedly summed up the whole discovery, "HOLY SHIT SLAM DUNK PROOF THEY FOUND FRIKKIN RICHARD III."

The awesome just keeps coming too – on Monday scientists unveiled a 3-D reconstruction of Richard's face, which was never painted in his own lifetime, based on the skeletal remains. He looks like a cross between Laurence Olivier and Anonymous.  Caroline Wilkinson, professor of craniofacial identification at the University of Dundee, told the BBC Monday, "The facial reconstruction was produced on the assumption that the remains were unknown and portraits of Richard III were not used as reference." We live in an era of craniofacial identification. Oh my God, this is fantastic. And, as just the latest, University of Leicester Dr. Philip Shaw has examined letters from the king to reveal what Richard might have sounded like when he spoke. Hint: Those big-budget costume dramas really should come with subtitles.

But the Brits don't have a lock on all the butt-kicking, in-your-face scientific mind-blowing going on. Closer to home, a study published Monday in the journal Pediatrics revealed new evidence that Mary Ingalls, the elder sister of Laura Ingalls Wilder, may not have, as was previously assumed, gone blind from scarlet fever but instead from a brain disease known as viral meningoencephalitis. Dr. Beth Tarini and her study co-authors based their conclusion on "epidemiological data on blindness and infectious disease around the time of Mary's illness, plus analyzing local newspapers and Laura's unpublished memoir, 'Pioneer Girl.'" Using her pediatric knowledge of how scarlet fever typically behaves and together with creative sleuthing, she concluded that it was the virus that led to "optic neuritis, or inflammation of her optic nerves" – and Mary's legendary blindness. Does the news change the narrative of the "Little House" books? No. But as Tarini points out, it gives nervous parents some reassurance that childhood scarlet fever isn't the terror they may have only known from the famous books.

And in Los Angeles, Steve Hodel, author of "Black Dahlia Avenger," announced that a cadaver dog sent into the Frank Lloyd Wright-designed Sowden House "picked up the scent of human decomposition" -- lending further credence to his theory that his father, George, murdered aspiring actress Elizabeth Short there in 1947.

Short's unsolved murder has intrigued and perplexed investigators for decades – and routinely provided inspiration for popular crime drama. It was the basis for a 2006 Brian DePalma movie and a plotline for the first season of "American Horror Story." Though the finding isn't conclusive, it's another clue to an enigmatic crime, thanks to an unlikely investigator. Cadaver dogs are able to detect "soft tissue decomposition, human blood, human bone, cremation ashes and human bone decomposition if there's bone present and decomposing." What's cooler than scientists? Canine scientists.

What's fantastic about all of these stories is how they all, in their own ways, demonstrate the unstoppable, magnificently human need to seek answers. We want to know what really happened to Richard and Mary and Elizabeth. We want to know what they sounded like and how they met their fates. And when we figure it out – or at least get tantalizingly closer – it's thrilling. It's satisfying. The past is never truly behind us. It lives in the questions we never stop asking, and it connects us, in real and lively ways, to the epic, amazing narrative of history. Science, you rule.