As a pastry chef, I watched my artwork vanish in seconds. But its ephemerality was also what made it beautiful 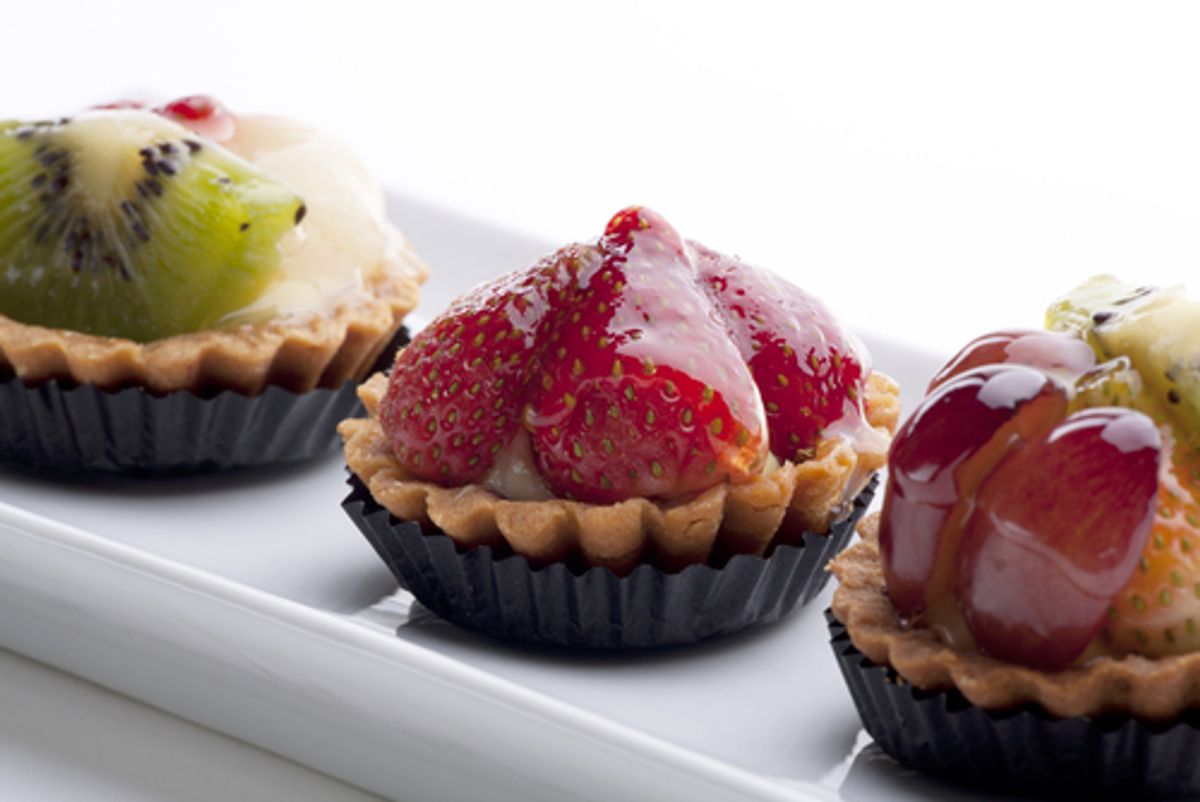 This piece originally appeared in The New Inquiry.

I used to be a pastry chef. It didn’t last—doing what you love for money ain’t all it’s cracked up to be, folks!—but it was an intensely gratifying experience. My very first gig was at a vegan restaurant more than an hour by subway away from my apartment, but I thought nothing of hopping on the train after my magazine job finished for the day, arriving at the restaurant, baking until near-dawn, getting an hour of sleep on the ride home, showering, and going back to my magazine job. I did this two or three times a week for months, and despite my cross-eyed fatigue, I loved the process. I loved—and still love—watching the magic of chemistry and labor. Chemistry: the rising of cake, the shortening of crusts; labor, measuring, the mixing, the juggling of pans, the exquisite feeling of slicing a pear just so and swirling the slices atop a tart. People always said to me, “Oh, I couldn’t be a pastry chef—I’d gain so much weight”; the truth is, professionals rarely eat what they create. That’s not where the pleasure is, even for a sweets lover like me. The joy lies in the creation.

So when my mother asked me if it bothered me that the tangible results of my hard work lasted for mere seconds before disappearing down a stranger’s gullet, I didn’t have a ready response. It had never once occurred to me to wish that my creations lasted longer than they did. Once she asked the question, though, I realized that the ephemeral quality of dessert was part of what I enjoyed about it. I liked that the results of my labor were to be enjoyed briefly and intensely, never to be had again. I mean, I had my menu usuals (my vegan hazelnut-chocolate pie is, in the words of the cafe’s dreadlocked proprietress, “slammin’”) and my results were generally consistent. But that slice would never be enjoyed by that customer in exactly the same way again. Different time of day, different dining partner, different mood, different desired emotional state resulting from the utterance Yes, I’ll look at the dessert menu: All these play into our enjoyment of food, particularly food we eat not for nutrition or satiety but for desire. I liked giving that to diners, strangers I’d never meet or even see, for the most part. It was theater.

I’d never considered the ephemeral quality of beauty work either, until it came up in a book I’m reading called Why We Buy: The Science of Shopping. The author studies consumer behavior in the minutiae, working with teams that silently survey shoppers in retail settings. According to the book, when men grocery shop for produce, they tend to pick up the first, say, head of lettuce their hand lands on, and drop it in their cart. Women, however, are more likely to pick up the head of lettuce, examine it for suitability, checking out several different heads before deciding upon one. I recognized myself in this (why pay for a subpar avocado when there could be a perfect avocado next to it?!), but I really recognized myself in the author’s explanation: “Women…have traditionally understood the importance of the impermanent world—cooking a meal, decorating a cake, fixing hair and makeup.” Stereotypical, yes. But will you really be that surprised when I tell you that of the 16 students in my class at pastry school, 15 were women?

The author’s word choice struck me: impermanent, which I unintentionally tweaked in my mind to impermanence. When I thought to Google it, I wasn’t terribly surprised to find that beyond its meaning of, well, not-permanent, impermanence is a also term of Buddhist teachings. Now, my understanding of Buddhism doesn’t go much farther than “pop Buddhism,” as in I read one of the Dalai Lama’s books once. So my base of knowledge is thin at best, but from what I understand, impermanence is one of the three conditions of life that every living creature shares (the other two are death and taxes). That is: One of the only things that is certain in this life is change.

Most of the time when we talk about beauty’s relation to impermanence, we’re talking of age and the supposed decay of physical appeal that it brings. And, yes, there’s plenty to say about that, but I’m thinking less of the change we endure by the year and more the change we endure—or create—by the minute. Beautywise, there’s special-event impermanence: weddings, proms, the spate of Great Gatsby parties that are sure to hit soon. There’s beauty-phase impermanence, like going Cleopatra with the kohl for six months, or my misguided pigtail era of 2002. There’s trying-it-on impermanence—nail decals, say, or hair chalk.

And then there’s the kind of impermanence that’s reflected in our daily beauty labor. Any sort of beauty labor that we do, we’re doing it for effect, whether that effect is polish, sophistication, glamour, not looking like we were up too late the night before, or simply presenting an oh-so-slightly exaggerated version of what we look like “naturally.” We wake up, create that effect, go about our business, fall asleep—and do it all again the next day.

And while I may resent some of the political implications of beauty labor, and sometimes get cranky because of the time it can take for me to pull myself together (we’re talking about 10 minutes here once I’m showered, though my entire grooming procedure takes 55 minutes), what I don’t mind is its impermanence. In fact, as with pastry, that might be part of what I appreciate about it. Repeated mechanical labor can have a stultifying effect, but under the right conditions, it can also bring about a state of presence. It’s not quite flow, because I think of that as being more about being engaged in the activity itself. While I might be thinking a little bit about, say, whether I want to wear lipstick that day or if I should use liquid or pencil eyeliner, most of the time the actions of beauty work become automatic: I reach for the same tools kept in the same place, I use the same spot on my hand to blend foundation, I apply my dry shampoo in the same spots—all of which frees up my mind to passively think about what lies ahead. I’m mentally steeling myself for a draining day at the office, or leaning into a day spent doing only exactly what I want to do, whatever that might be, or I’m calming nerves over an upcoming meeting. Or maybe I’m just thinking about a joke from the night before, or why Full House lasted as long as it did. The point is, I’m both engaged and separate; going through motions but allowing for mental drift. It’s both tuned in and checked out, a state of centering myself. It’s—I mean, forgive me, true practitioners of Zen, but isn’t that sort of meditation lite?

In fact, that’s exactly what I was after when I decided to give the professional kitchen life a whirl. Yes, I enjoyed the act of baking (and its varieties of caramel-drizzled outcomes), but the real reason I didn’t mind regularly going 36 hours without real sleep was because of the pseudo-meditative state baking induced. With three different desserts in the oven and two more on the stove, you’ve got to be on your game, but in an entirely different way than I had to be on my game while copy editing. It was a matter of constant, evenly paced motion; of wiping down the same counter a dozen times in one night; of the rhythm of rolling out a crust.

I don’t think it’s a coincidence that both beauty labor and baking—neither of which require a good deal of heightened cerebral awareness, and both of which can induce a state of reflection—are both activities of impermanence. The very fact that it’s a repeated motion whose results will not last demands a different sort of focus and attention than activities with lingering results. The impermanence of beauty work nudges us to be in the moment, in a way that’s both active (you’re doing an activity) and passive (your mind is freed while your hands are occupied); by rote (I can do it without looking in the mirror if needed) yet with an element of joy.

Beauty labor can be a distraction from our larger goals—the time, the money, and most of all, the voice in the back of the head that keeps telling you to check your lipstick, check your hair, check your face. Yet as with so many aspects of beauty work, there’s a flipside there too, one that serves as a gentler reason for putting in the effort that beauty work requires. Putting my efforts into something impermanent (relatively speaking) has its rewards too, but those rewards will forever differ from the rewards of impermanence. And I’m still wondering if the author of the shopping book was right in parts—whether women might have more of a proclivity for the impermanent. Could it be a fear of the permanent, a lack of belief in one’s might and weight? Or is it a tacit acceptance of constant change—even a nod to the myriad roles women are expected to play, sometimes on a daily basis?