The genre-bending series returns tonight. Can it survive without series creator Dan Harmon? 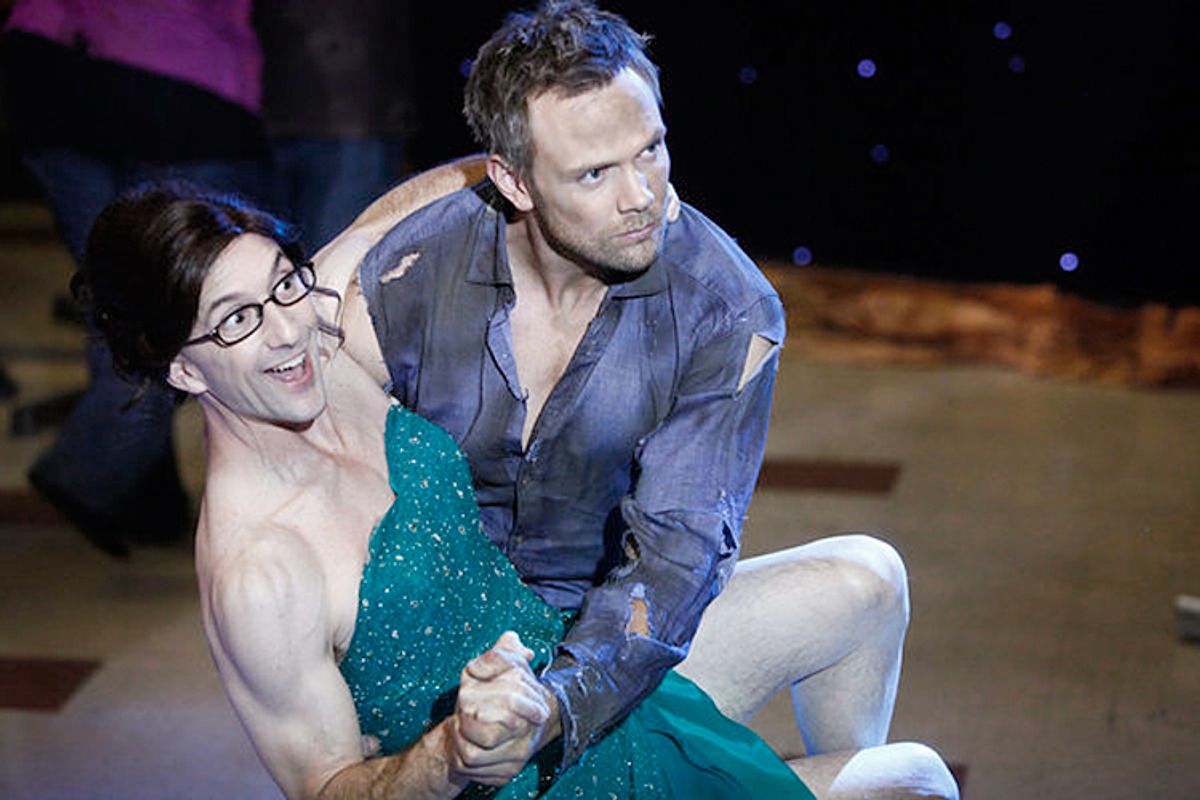 “Community” returns tonight for its fourth season and its first without series creator Dan Harmon. Harmon, for better and for crazy, was one of the more essential showrunners on TV: “Community” reflected and refracted his very singular, trippy, pop-culture-soaked worldview and genre-bending and -busting instincts. For three seasons he oversaw a series that was supremely ambitious, usually impressive, occasionally exhausting and like nothing else on television. He appears to have been extremely difficult to work with as he did so. NBC fired him at the end of last season instead of canceling the show, a good number of the show’s staff writers left soon after, and David Guarascio and Moses Port, two writers and producers with excellent credits ("Happy Endings,” “Aliens in America”), were given the unenviable task of carrying on “Community,” post-Harmon. The new episodes are such a good-faith effort to continue Harmon’s legacy it’s a shame that they don’t really work at all.

Tonight’s premiere, especially, is, on paper, an uncanny continuation of Harmon’s interests. The gang returns for its last year at Greendale Community College, eager to get into the History of Ice Cream Making. The class is overbooked, enabling the dean to force prospective enrollees to compete for a seat in the class at “The Hunger Deans,” his take on “The Hunger Games.” Abed, anxious about change as ever and fearful of his friends splitting up, eventually has to take regular visits to his “happy place” to cope. This happy place, deep inside his head, is a multicamera sitcom — Abed TV’s “Happy Community Show” — with a laugh track starring his friends (and Pierce).

Turning “Community” into a multicamera sitcom, even if only in Abed’s mind, is a rock solid meta-joke. It’s a neat approximation of fans' fears about what “Community” will become in this new Harmon-less era while also being exactly the sort of thing Harmon might do. “Community” has, from the very beginning, messed around with genre (see: the claymation episode, the “Law & Order” episode, the multiple timelines episode, and on and on) and Abed has always served as the show’s analytical, TV-obsessed heart — his cozy, safe place really might be a multicamera sitcom.

Conceptually, it’s a gangbusters premise for the first episode back, and yet it never clicks. It’s not funny. The multicamera stuff rarely works on two levels: The joke is just that it's bad, instead of making you giggle by manipulating that badness. It’s all idea, no laughter. (To be fair, it's a problem that many Harmon episodes of “Community” tangled with on occasion.) The actors sound like themselves, but they don’t quite sound like themselves: There’s a disorienting ventriloquism going on. (This is a nitpicky example, but at one point Britta makes a Jessica Biel reference, using her name in a pun. I wondered, Would Britta really do that? Penny Hartz would, but Britta probably thinks she hates Jessica Biel. But maybe if this was last season I wouldn’t even be thinking about it, and I would just let it go? Poor Guarascio and Port. What a thankless gig they wrangled for themselves.)

The second episode is less ambitious than the first, but just as wholly dialed into “Community” lore. It takes place at an Inspektor Spacetime convention and revolves around Troy and Abed’s friendship. It is even less funny. The romances on “Communuty,” except for Troy and Abed’s, have always seemed so hollow to me: Suddenly they are taking up serious story-line time.

In both episodes, it feels like the new showrunners are almost being too respectful of Harmon’s particular strengths and obsessions, but even as I type that I know they had no choice. If they weren’t trying to triangulate Harmon as best as they could, I’d be writing about how aggressively they were dumbing down “Community,” or trying to turn it into another show. Given time, I suspect that they could dial deeper into the characters, figure out a way to bring their sense of humor and strengths to the fore — but what’s the point? “Community” has already existed in its ideal form. I'd so much rather watch the talented people involved go on to do other new things, than to see them keep trying to resuscitate a series that already had a great life.