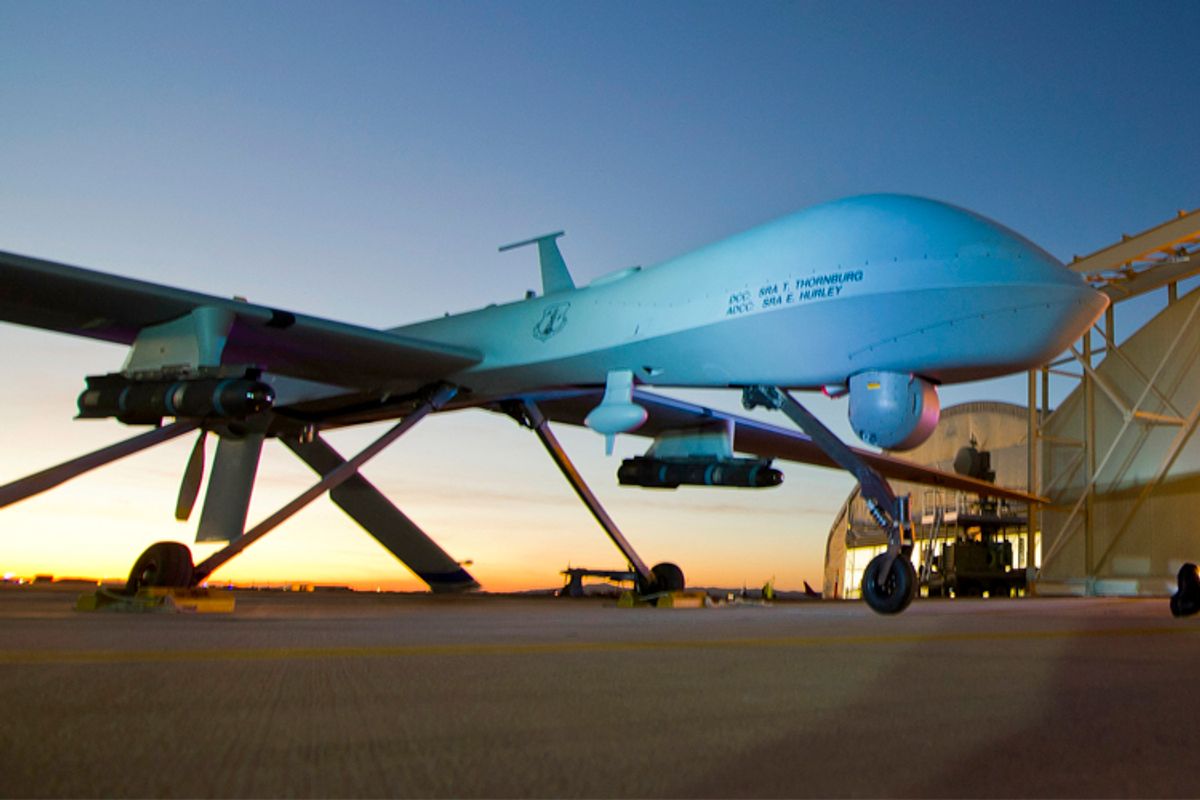 Between the confirmation hearings of drone war architect John Brennan and the recent release of the Department of Justice white paper vaguely laying out the supposed legal basis for the targeted assassination of American citizens suspected of terrorism, the Obama administration has, this month, faced more sustained and vocal criticism of its anti-terror and civil liberties record than ever before. Arguments leftists and civil libertarians have been making for years are finally getting something of an airing in the mainstream press. You'd think the conservative press, united in its ferocious opposition to nearly everything Obama does, would be gleeful. They aren't, really.

Last week, Conor Friedersdorf answered the common conservative complaint that the media are "too easy" on Barack Obama, The claim does have merit. Most of the political press has a sycophantic relationship to power. The White House press corps do regularly beat up on the press secretary (it is his job to be berated theatrically by people he is lying to), but reporters usually treat the president and most of his Cabinet deferentially. The president prefers the one-on-one interview to the press conference. He usually chooses friendly interviewees, which is easy, because most successful American political journalists naturally default to a friendly posture when one-on-one with the president, out of "respect" for the office.

Conservatives complaining about these lame Obama interviews, though, miss a pretty obvious point: Softball one-on-one interviews with the president are not a very good means of judging how "friendly" the press is to a presidential administration. I'd argue that a significant portion of the coverage of the administration by the objective press is critical, even hostile -- just not always in a way that matches the conservative conception of Obama as far-left domestic tyrant dedicated to sapping American strength abroad.

In 10 minutes I could make a list of a dozen fairly prominent media outlets, including old and new media, ranging from old-fashioned "objective" to left-wing, that have been highly, sometimes brutally critical of the Obama administration's counterterrorism activities. A Tuesday New York Times piece on John Brennan began with the horrible tale of an anti-al-Qaida cleric dying in an American drone strike. But conservatives don't actually read the New York Times, so many of them probably missed the story. The DOJ white paper that sparked much of this current debate was released by NBC News, an organization conservatives consider an arm of the Obama White House.

But this isn't the sort of critical coverage conservatives want. When the New York Times revealed the existence of a drone base in Saudi Arabia -- a base whose existence the Washington Post was aware of but kept secret -- conservative columnist Marc Thiessen responded by attacking the administration for allowing the press to learn about the base. Thiessen writes for the Washington Post, even though he doesn't seem to support the mission of journalism, at all.

Friedersdorf listed four "explanations for the insufficiently adversarial attitude toward Obama" that were more reality-based than simple "liberal media bias." The third one sums up the current widespread conservative confusion:

Many conservatives are ideologically committed to the proposition that the president should be almost totally unconstrained in the realm of foreign affairs. As a result, many of Obama's most questionable behavior is ignored by the conservative press -- and it is also ignored by the subset of the "establishment media" that uses partisan conflict to determine what to investigate, rather than making independent judgments about what is important to cover.

Most of the objective press considers issues to be worthy of debate and adversarial questioning only if they're the subject of specifically partisan disagreement. If it's a left-wing (or far right, or libertarian) objection to something on which there is broad bipartisan agreement -- like the invasion of Iraq in 2003 -- it's a silly fringe concern unworthy of serious attention. The media are "soft" on Barack Obama on the subject of foreign policy because Republicans can't object to the worst and most controversial foreign policy decisions of the Obama administration, and most elected Democrats won't. If Lindsey Graham and Dianne Feinstein agree, then for the purposes of the Sunday shows there's no "debate" to be had. When liberal senators like Ron Wyden object to administration actions, it's just not considered as important or newsworthy as Republican objections to perceived liberal actions by the administration.

Some of the most prominent and respected conservative thinkers in the country have no problem at all with a president they hate granting himself the power to decide, based on secret evidence, which Americans to blow up with missiles that frequently also blow up other, unrelated people. Charles Krauthammer compared targeted killing to the death of Americans at Antietam. National Review editor Rich Lowry said he is perfectly fine with the white paper and its shaky argument. Lowry writes that "the left ... has blithely accepted the Obama administration’s extrajudicial assassination policy," suggesting that Lowry doesn't actually pay any attention at all to "the left."

There was broad bipartisan agreement on the FISA Amendments Act renewal. John Brennan will get confirmed. The actual OLC memos laying out the legal argument for targeted killing will remain sealed and secret. The right hasn't and won't object to any of this. (Modern American conservatives seem to believe that the government can't be trusted to do anything competently or efficiently besides decide who lives and who dies.) Instead of making the case against the administration based on those reality-based controversies, conservatives fixate on insane bullshit, like the idea that the administration purposely allowed the Benghazi attacks to happen and then refused to call them terrorism. Then they complain that their conspiratorial nothing-scandals don't get enough pickup in the mainstream press.