Meet the two defectors of the Westboro Baptist Church

After an emotional and public break from the notorious church, where do kids raised in hate go now? 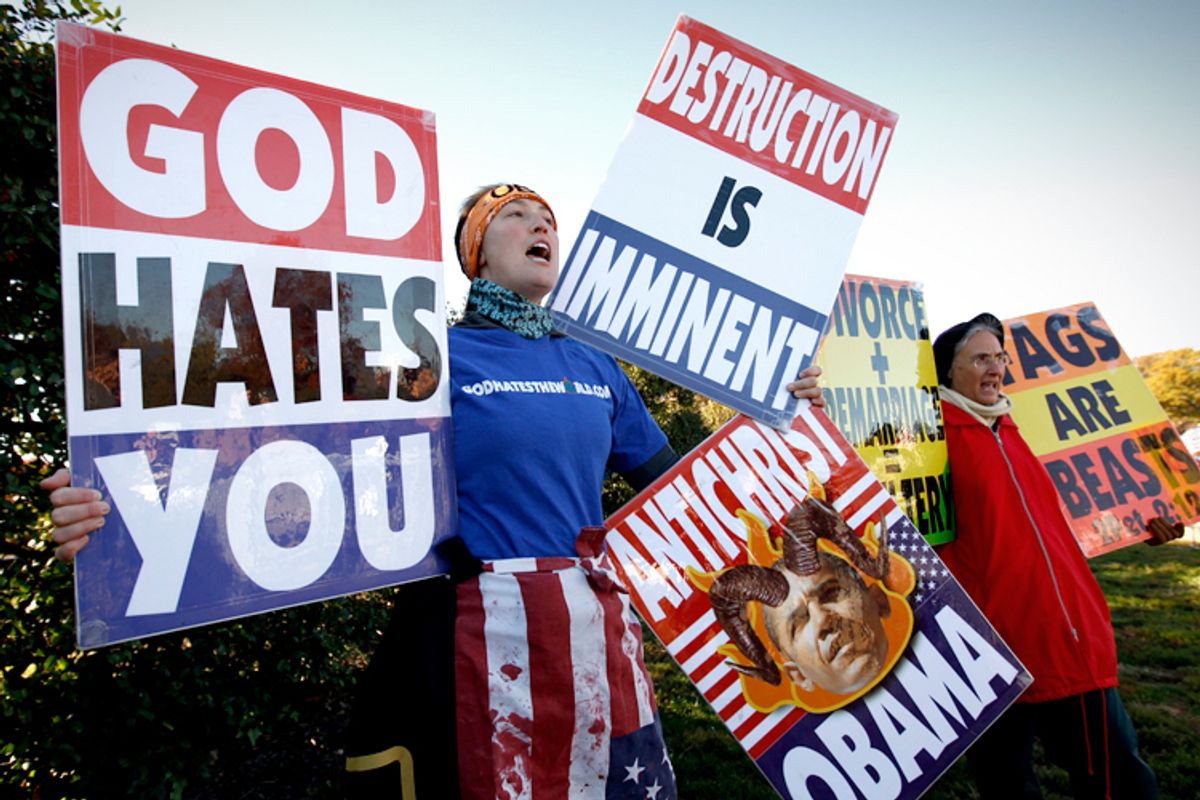 In a surprisingly public display of soul-searching, two members of the hate-mongering Westboro Baptist Church are defecting. Fred Phelps' granddaughter Megan Phelps-Roper declared Wednesday that she and her sister Grace have left their Kansas congregation, and apologized for the pain their organization has inflicted. Or, as she said in a text message to the Kansas City Star, "We ripped the Band-Aid off."

The Phelps name is strongly associated with the vile 83-year-old patriarch Fred, a man whose contribution to our national dialogue has, for the past several decades, consisted almost entirely of the motto GOD HATES FAGS. The Phelps clan and its congregation, Westboro Baptist Church, have earned themselves quite a reputation over the years, mostly for their penchant for showing up at funerals and gleefully spewing invective at mourners. But in December – shortly after the group threatened to picket the funerals of victims of the Sandy Hook massacre -- a petition to finally officially designate the "church" as a hate group became the most popular on the White House's We the People site ever. And after years and years of bullying, the small but appallingly vocal group seems to be losing its talent for making a scene. In January, the group failed to show up for four demonstrations it had vowed to do at four different Pennsylvania churches. Its big protest at the presidential inauguration had more signs than humans.

And now, with a candid post on medium.com, two members of the Phelps clan have shown that old Phelps' revolting influence may not persist into a new generation. In her post, titled "Head Full of Doubt, Road Full of Promise," the 26-year-old Megan Phelps-Roper speaks plainly of the world into which she was born and raised, within "a group of people who believe they are the center of the universe; they know Right and Wrong, and they are Right. They work hard and go to school and get married and have kids who they take to church and teach that continually protesting the lives, deaths, and daily activities of The World is the only genuine statement of compassion that a God-loving human can sincerely make." And, she says, "this is what I lived, breathed, studied, believed, preached – loudly, daily, and for nearly 27 years."

It's almost impossible to imagine what it must be like to be that deeply steeped in a culture that almost anyone on the outside looking in would understand to be reprehensible. How strange and confusing it must be to grow up loving and depending upon people who would stand outside a dead soldier's funeral screaming. Phelps-Roper says simply that she and her sister have now left the church, that their family considers them "betrayers," and that they're "trying to figure it out together." A spokesman for the Westboro Church said Wednesday, "If they continue with the position that they have, those two girls, yeah, they’re going to hell." And on Thursday, Fred Phelps' daughter Margie, whom Megan referred to as "my dear @margiephelps" back in September, tweeted "Cyberspace is SATURATED w God H8s Fags! Why? Cuz some young ladies rejected the truth of God?" And you think your family is toxic.

What happens next for the Phelps-Ropers -- aside from the going to hell part -- is for them to decide. They come from a culture of rigidity and intolerance, and today find themselves in need of tolerance and understanding. In her post, Phelps-Roper says, "We know that we’ve done and said things that hurt people. Inflicting pain on others wasn’t the goal, but it was one of the outcomes. We wish it weren’t so, and regret that hurt."

But their story isn't just theirs to write. It will be written in the choices those who hear their story make, and how these women are received, and either welcomed or spurned, from here on out. They didn't choose their family or their name. They've participated in wrongs, and they're trying now to do right. And as they move forward, Megan says, "The environment we grew up in was very 'us vs. them.' It's been nice to see that the 'them' have been overwhelmingly kind — as we’d kind of hoped and suspected." Welcome to the other side of the picket line, Megan. Welcome home.