"Downton Abbey" recap: It’s not against the law to hope, is it?

Gay rights and cricket come to the Abbey 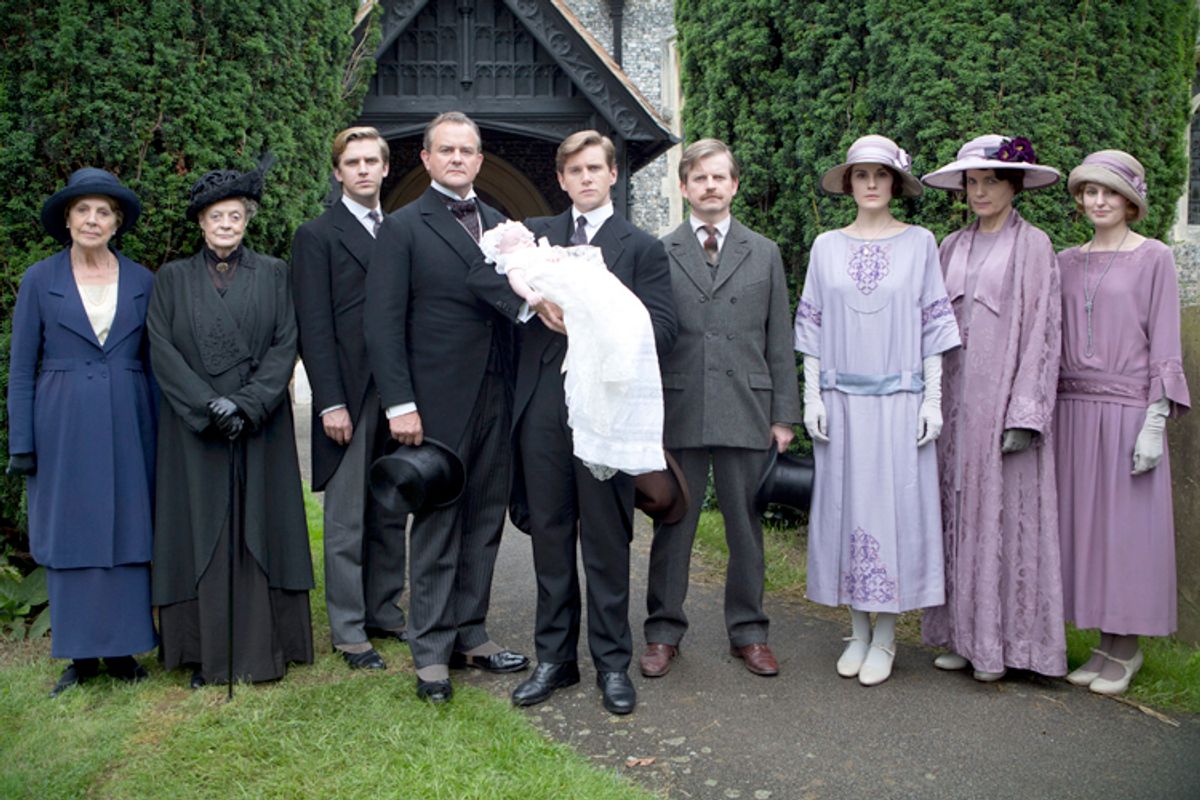 The two-hour “Downton Abbey” that just aired on PBS was broadcast in Great Britain as two separate episodes, the second of which was the season three finale. After that bucolic cricket match, audiences across the Atlantic had to wait two long months before seeing the Christmas special, which will air next week on PBS. I raise this matter of scheduling not to revel in the fact that we Americans don’t have to wait patiently for our next “Downton” fix, but to point out that “Downton Abbey” is now the kind of show that introduces its audience to a bratty, bright young thing engaged in foolish and clichéd nonsense in the season finale, rather than giving some more screen time to one of the dozens of underserved characters we already know and care about.

I’m as interested in gin parties as the next person — and why, if Julian Fellowes is so keen to show us roaring London, has he refused to let one of the Crawley girls have some fun? — but not when the person going to them is some random character dropped in from a crappy screenplay treatment of one of Evelyn Waugh’s lesser comedic novels. It’s the season finale! Lady Mary has not had a decent storyline since the very first episode of the season. She couldn’t have been making like a Mitford on the London social scene these past few months? Last week Daisy got offered a whole other career. What did she do about it? Who knows! Let’s check in on this Rose character instead!

A more generous soul would not lead with this head-scratching choice, since there was much better stuff in this mega-episode, including Tom’s brother’s resemblance to Zach Galifianakis, the resemblance of Edith’s editor’s backstory to “Jane Eyre’s” Rochester, and Thomas's storyline. (The complete destruction of Tom's principles and Ethel and Isobel's realization the Granthams' reputations matter most were maybe not "better" storylines, but they were interesting.) The Thomas plotline is the quintessential story of this season of “Downton”: It kind of doesn’t make sense and is extremely manipulative, but it made me feel something anyway.

To begin, O’Brien’s machinations to convince Thomas that Jimmy is actually interested in him is exactly the sort of "plan" that only works on TV shows where an "evil genius" is actually just lucky enough to have every little thing she or he does, which could go dozens of different ways, turn out perfectly. Thomas may be smitten, but he is also a clever guy who — as his willingness to own up to his sexuality suggests — has thought a lot, and done a lot, about his preferences. Way back in season one, he misread the signs and put the moves on someone he should not have, but at least that guy was awake. I don’t care how much groundwork O’Brien laid, I just don’t buy Thomas going into James’s bedroom in the middle of the night to lay one on him.

Once it had happened, things got interesting. Despite the fact that every single conversation that Thomas had about his sexuality was totally anachronistic — just like the conversation from the first episode of this season that contained the line "Sometimes I feel like a creature in the wilds whose natural habitat is gradually being destroyed," the terms of these conversation, that Thomas was born this way and could not be expected to change, were exceedingly modern — it reshuffled “Downton’s” standard alliances, making allies of characters with different motivations.

Jimmy and Alfred finally found themselves united on something, but Alfred’s resolve and honorability suddenly make him so much more of a jerk than the more pompous but flexible Jimmy. Mettle is a good quality, until it is indistinguishable from rigidity. Ms. Hughes, Bates, Carson and Lord Grantham eventually formed a Thomas-defense brigade, but with a vast array of incentives: Only Ms. Hughes and Bates were motivated by kindness, and even this was colored. Ms. Hughes was still laboring under the impression that the self-injuring Thomas was a war hero, and Bates was just trying to work out his own prison PTSD. In the sort of detail that makes me still love “Downton,” Lord "Let's Give All the Money to Ponzi!" Grantham basically doesn’t care that Thomas is gay because (1) he's good at cricket and (2) men kissing men is downright Etonian. So long as homosexuality is a tradition, Lord Grantham will protect the servant who practices it from the cops.

Meanwhile, Thomas, poor Thomas, is crying in the dark and feeling really pitiful for himself: Is this the beginning of his makeover as a not-totally bad guy? Or did that really start when he told Jimmy, all easy charm, "Well, I love you." “I am not foul, Mr. Carson. I am not like you, but I am not foul” is a great line, and even when he gives Bates the words he needs to turn O’Brien, Thomas doesn’t tell Bates everything about his former friend's misdeed, just "Her Ladyship's soap." O'Brien is now the only fully loathsome person walking around "Downton Abbey," and though she did Thomas way, way wrong, there is some part of me that is hoping the two will reconcile. It’s been a pretty up and down season for true love on “Downton” this year: Matthew got Mary and Anna got Bates, but Edith got jilted and Sybil died. It would be nice to think that one day Thomas and O'Brien could scheme over cigarettes again.