Novelists like Jennifer Egan and Jeffrey Eugenides employ theory jargon as flirty banter. Is this the new rom-com? 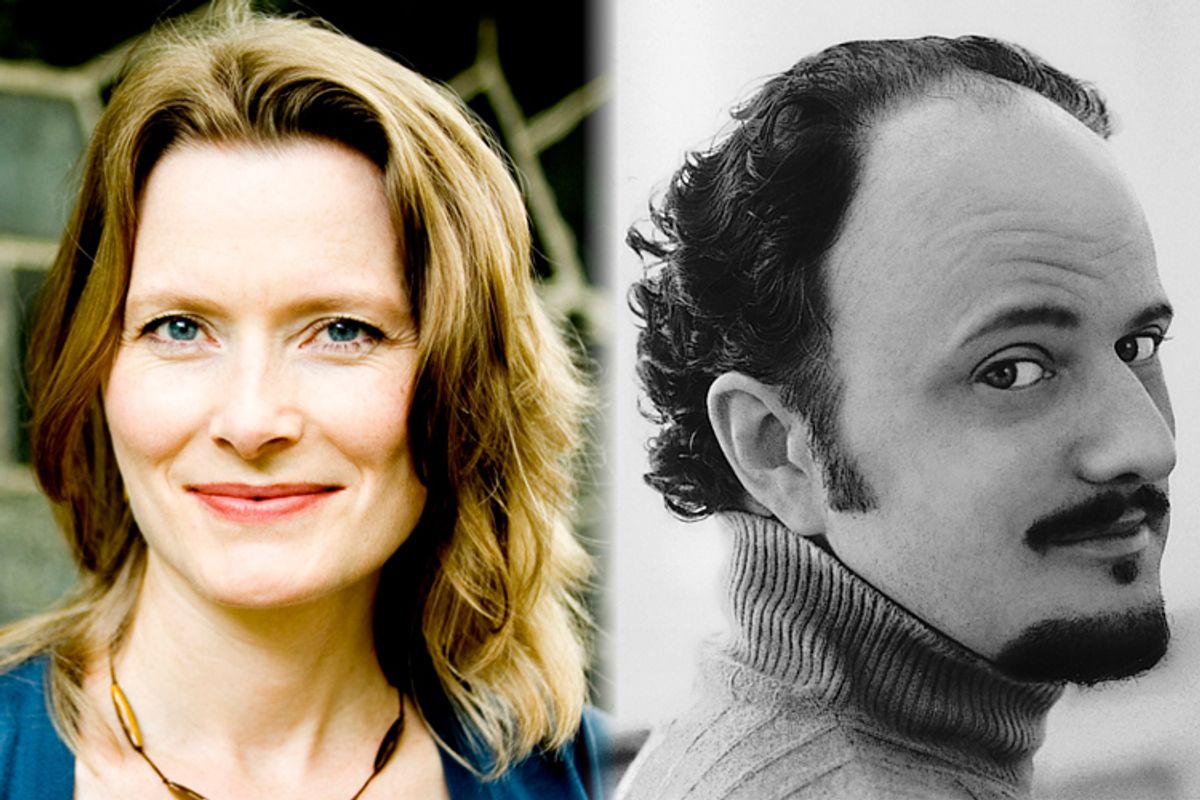 My favorite love song of the past few years is “Video Games,” by Lana Del Ray because of the third line of the chorus. It's the song's most burlesque moment, a come-on that should feel scuzzy and hackneyed, that should ruin everything: “I heard that you like the bad girls, honey.” But it catapults the song over all the barricades I’ve erected in my soul against love songs and against songs in which the singer self-identifies as “bad.” The reason is that the melody in which this particular line is sung cuts against its meaning. Because the words are about sex, you’d expect the song’s heretofore sultry melody to remain sultry or wax sultrier. Instead, on the words “bad girls, honey,” the vocal goes high, chaste, folky. If you only heard this snippet of melody, without words or context, you’d guess it belonged in an Indigo Girls song about ghosts or injustice, or in a lament about Scotland. That’s why the “bad girls, honey” kills me: The words are able to register as hot because the notes are cold. The operative principle here — you can get away with saying something very warm if you deliver it in a cold medium — also explains why Lana Del Ray gave this warmest of torch songs the coldest of names.

A number of my favorite novels of the last decade perform a similar feat. They get away with great warmth — courtship stories that aren’t so different from Hollywood romantic comedies, stories that flirt with cheesiness, triviality, sentimentalism — by using a particular cold vocabulary, the vocabulary of theory. The novels include "Leaving the Atocha Station," by Ben Lerner, "The Marriage Plot," by Jeffrey Eugenides, "A Visit From the Goon Squad," by Jennifer Egan, "Indecision," by Benjamin Kunkel, and "The Art of Fielding," by Chad Harbach. A recent essay by Nicholas Dames, “The Theory Generation,” published in n+1, described the first three of these books, along with Teju Cole’s "Open City," Lorrie Moore’s "A Gate at the Stairs," Sam Lipsyte’s "The Ask," and Jonathan Franzen’s "The Corrections," as “theory novels,” meaning that they’re realistic stories in which characters contemplate, discuss and sometimes attempt to live by modern and postmodern, usually post-structuralist theories drawn from literary criticism, anthropology and philosophy. But it seems to me that all of the above novels fit the category; maybe Dames declined to discuss novels by Kunkel and Harbach, founding editors of the magazine for which he was writing, out of concern for journalistic impartiality. At any rate, what interests me most about all of these novels is not that they engage with theory, but that they use theory to make love stories work on the page.

"The Marriage Plot" is really a courtship novel, one out to prove that the theorists who declared the death of the courtship novel were wrong. (It concerns a love triangle among college students.) But most of the aforementioned theory novels — exceptions being "The Ask" and "Open City" — are courtship novels. Not all of them feature characters considering marriage. In "Leaving the Atocha Station," both protagonists' romances are educational dalliances, and in "The Art of Fielding," marriage isn’t a pressing concern for either of the two central couples. But "Atocha" and "Fielding" are in large part about young people dating, falling in and out of lust and love. "Indecision" ends with its philosophy-major narrator proposing to his anthropologist girlfriend. And "Goon Squad’s" theory chapter, “Safari,” ends with a Levi Strauss–obsessed anthropology grad student marrying the record producer whose family she’s been observing through an anthropological lens.

Sometimes, in these novels, discussions of theory are merely juxtaposed with love scenes. But the best ones are those in which theory provides the language that enables the lovers to communicate. In Eugenides’ book, two Brown students, Leonard and Madeline, meet in a semiotics class. When Madeline tells Leonard she loves him for the first time, he finds an ingenious way to slam on the brakes: He digs in her bag for her copy of Barthes’ "A Lover’s Discourse" and points to the section on the words “I love you.”

"The figure refers not to the declaration of love, to the avowal, but to the repeated utterance of the love cry … Once the first avowal has been made, 'I love you' has no meaning whatever …"

He smirks, she throws the book at his head. A young lover rejecting another in naturalistic dialogue might feel melodramatic, too hot, too familiar to allow a reader to feel the sting. But because Leonard’s cruelty comes in the form of a quotation about a “figure,” an “utterance” — that is, in the cold jargon of literary criticism — the moment of cruelty feels unconventional, real.

"Leaving the Atocha Station" also uses theory’s vocabulary to describe the experience of courtship. The most distinctive passages in the novel may be essayistic responses to John Ashbery poems, but it must be noted that Lerner can write a meet-cute. Early in the novel, for instance, the narrator, Adam Gordon, a young poet on a Fulbright fellowship in Spain, sits with a group of Spaniards, listening to a young woman named Isabel tell a story. Because his Spanish is still poor, Adam smiles as he listens, pretending he understands, and is surprised when it turns out the story is a sad one and the other Spaniards find his smile offensive. One of them punches him in the face. Isabel takes pity on him, and they joke about the incident and flirt by a lake. This is romantic comedy. But it’s a description of Adam’s experience of Isabel’s Spanish that brings the otherwise rom-com-like sequence to an emotional climax.

"I heard the names of streets and months; a list of things I thought were books or songs; hard times or hard weather, epoch, uncle, change, an analogy involving summer, something about buying or crashing a red car. I formed several possible stories out of her speech, formed them at once, so it was less like I failed to understand than that I understood in chords, understood in a plurality of worlds."

Here is the beauty of flirtation rescued from cliché by the churning of a mind trained to analyze language at Brown. (Adam’s alma mater is the same as Leonard and Madeline’s.) It’s hard to imagine any description of Isabel’s voice or face that would not pale in comparison to this tribute to the multiplicity of meanings Adam finds in her Spanish. There is a psychological complexity here too: Perhaps Adam’s mind is open to the profoundness of his experience of Isabel’s language because Isabel is pretty, and/or because Adam and Isabel have chemistry, but Adam’s mind will not dwell on prettiness or chemistry, only on words.

It’s not only the warm content/cold vocabulary dynamic that makes theory-informed description so complementary with courtship stories. It’s also that theory lends itself to essayistic passages about characters’ thoughts, while courtship lends itself to dialogue, action and gestures. The mix of theory and dating naturally incorporates every item in the traditional novel’s toolbox. And the lofty abstractions the characters contemplate are tested in the physical domain of sex. The push and pull of theory and dating is also a push and pull between reflection and plot.

The theory/courtship mix has produced a raft of very good books. But it can’t endure forever; given that so many of the prominent novels about young love that have been published over the past 10 years have used it, it’ll probably feel old-hat in five minutes. For me, the interesting question is not so much what is the future of novels that deal with post-structuralist theory? but what is the future of novels that deal with dating? Will there be another vocabulary that will make stories about dating feel fresh and surprising? In other words, will writers find another method to reinvigorate stories about contemporary courtship, save them from feeling conventional Hollywood? A method that works as well as using the language of theory?

One obvious answer: Perhaps the new cold medium will be the vocabulary of the social media through which so much contemporary courtship takes place. Gary Shteyngart and other novelists have written funny and sad stories about love in the age of texting. But in the fiction I’ve encountered so far, love endures despite, rather than through, the new forms of communication, which are eagerly satirized.

I wonder if the author who might lead us to a new way of writing about dates and flirting is Jennifer Egan, a master at getting away with warm content by writing cold. (The warm/cold spectrum is a way of thinking about prose that I’ve picked up from listening to Egan talk about her work.) "A Visit From the Goon Squad" includes a chapter, “Twelve Great Rock ‘n’ Roll Pauses,” an adolescent girl’s tribute to her parents and brother. It might feel sentimental if it weren’t told in PowerPoint slides. In the New Yorker’s 2012 science-fiction issue, there’s an Egan story, “Black Box,” about a beautiful spy, another character from "Goon Squad," who seduces enemies of the state. It would feel unbelievably Hollywood if it weren’t narrated by a computer implanted in the heroine’s head. If somebody can pull an Egan, and find a way to make an apparently corrupt and impersonal mode of communication the cold medium in which an unusually hot, melodramatic, verging-dangerously-close-to-rom-com story line about courtship is delivered, the dating novel will be snatched from the jaws of convention once more.

Benjamin Nugent is the author of the novel Good Kids, published by Scribner in January. He's the director of creative writing at Southern New Hampshire University.