"The Jeffrey Dahmer Files": That nice young man in Apt. 213 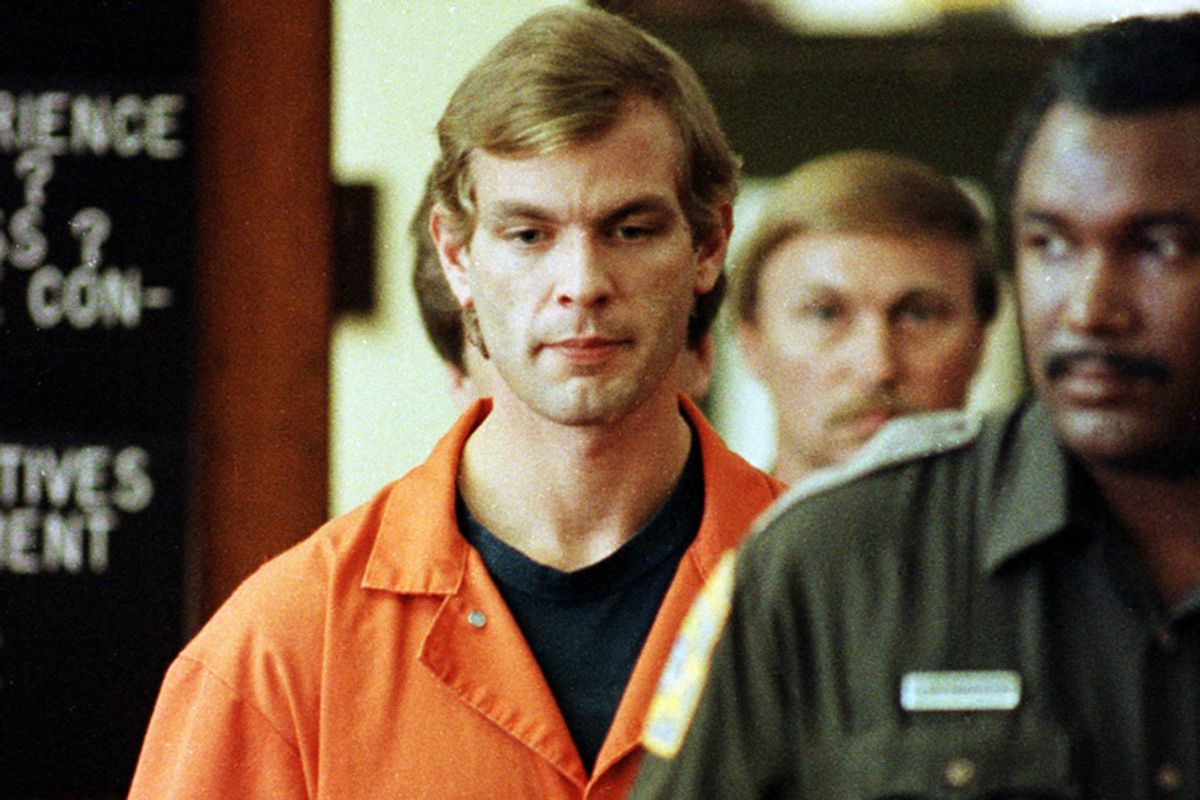 Milwaukee in the early 1990s was a fairly typical middle-size, Middle American city, which is to say it was struggling with relatively high rates of crime, widespread urban blight and all the effects of the collapsing industrial economy, including crack and unemployment. When burly, mustachioed homicide detective Pat Kennedy showed up at the Oxford Apartments on North 25th Street – in a working-class, largely African-American neighborhood -- on the night of July 22, 1991, he felt pretty sure he was a tough cop ready for whatever he might find: a drug deal gone wrong, a domestic dispute turned deadly or some other variation on the familiar themes of urban violence.

What Kennedy walked into was a case that no one, anywhere, would have expected. Hardened police officers, as Kennedy and building resident Pamela Bass remember it, were disheveled and vomiting; the handcuffed suspect – a white man, unexpectedly – was howling like an animal. A foul stench filled the air, a combination of putrefying flesh and industrial chemicals. One of the ashen-faced uniformed cops inside Apartment 213 told Kennedy to look in the refrigerator. As everyone who’s ever read the gruesome details of the Jeffrey Dahmer case knows, there was a severed human head in a cardboard container inside that fridge, along with a few other dismembered body parts – and those were only the first of many gruesome discoveries in that apartment. Kennedy also noticed an open box of Arm & Hammer baking soda in the back of the fridge, and remembered that his own mother used to do the same thing. On the inside of the door, he recalls, “There were condiments: mustard, ketchup, A-1 Sauce, that kind of thing.”

Precisely that combination of ingredients, and that intimate level of observation, is what distinguishes “The Jeffrey Dahmer Files,” an unconventional Milwaukee-made indie documentary, from all the other cultural ruminations on the story of this notorious murderer. I’m not sure that director and co-writer Chris James Thompson’s film sheds any new light on why Dahmer committed his crimes, but I’m also not sure that anything is gained by trying to look too deeply into such a disordered personality. During his lengthy interrogation sessions with Kennedy, who eventually elicited confessions to 17 murders, Dahmer apparently told the detective that killing, dismembering and sometimes eating the bodies of young men made him feel powerful, and maybe it was just as atavistic and stupid as that. (When he finally decided to confess to Kennedy about the killings, Dahmer told him, “I’m going to make you famous.”)

But “The Jeffrey Dahmer Files” is not primarily focused on the most gruesome details of Dahmer’s story, and the crime-scene photographs seen in the film avoid the most infamous and disturbing images. Instead, the film is about three ordinary people whose lives were touched in different ways by this extraordinary case, which left deep and enduring scars on a city better known for its love of beer. Along the way the movie also makes what we might call the “A-1 Sauce” argument about Dahmer himself. That is, he struck everyone who knew him as an unremarkable person, and behaved normally much of the time. Even when buying five gallons of bleach, struggling home on the bus with a drum of chemical solvent or hauling a suspiciously heavy suitcase out of a hotel room, Dahmer was a quiet and polite individual who didn’t attract attention – more A-1 purchaser than severed-head collector.

Most of the film consists of extended interviews with Kennedy, Bass and Jeffrey Jentzen, who was then the Milwaukee County medical examiner, along with clips of news footage from the period. But Thompson augments these classic documentary elements with a few dramatized episodes from Dahmer’s daily life, with the unassuming killer (played by co-writer Andrew Swant) shopping for tropical fish and garbage cans, wandering through abandoned industrial sites or visiting Chicago’s Gay Pride parade (where he picked up at least one victim). You can’t exactly call these quasi-fictional scenes controversial, since they don’t advance any particular theory about Dahmer or his crimes, except perhaps the idea of him as a near-invisible man, whose grotesque killing spree went on for so long because no one noticed him.

Now, Thompson could have gone more deeply into some of the specific reasons why Dahmer was invisible. Bass, Jentzen and Kennedy all obliquely mention that the Dahmer case was a moment of shock and crisis for Milwaukee (as it would have been for any city). Then as now Milwaukee was a racially and economically segregated city with a relatively low-profile gay community; as a gay white man in a black neighborhood, Dahmer stuck out in some ways, but was also wrapped in a double cocoon of invisibility. Infamously, two months before Dahmer’s arrest, he had successfully convinced police to let him recapture a wounded, naked 14-year-old boy who had escaped from his apartment and was wandering the streets. It was an apparent spat between gay lovers, and the cops simply weren’t interested. So Dahmer took the boy home, injected hydrochloric acid into his brain (in an attempt to create a zombie sex slave) and then dismembered him.

Kennedy, a big, garrulous fellow who spent many hours with Dahmer after his arrest, admits that he grew to empathize with the notorious killer, perhaps to an unhealthy personal degree. (The striped shirt and jeans Dahmer wore for his initial court appearance actually belonged to Kennedy’s son.) Jentzen, who was able to parlay the advances in forensic science involved in the case into a teaching career at the University of Michigan, never knew Dahmer, and anyway his concern was the physical evidence rather than the killer’s personality. Still, the collection of skulls, bones, body parts and severed penises in Apartment 213 reminded him of something. “The best way I can put it is that we disturbed someone’s museum,” he says – and I imagine we’ll all be better off not thinking about its organizing principles.

Pamela Bass, Dahmer’s neighbor in the Oxford Apartments, befriended him initially because she felt sorry for this evidently shy and lonely man, and wondered why he had moved into a building full of black people. When police showed up that night in July, she assumed at first that Dahmer had been the victim of a crime, or been set up to take the fall for someone else. Later, she was forced to wonder what had been in the sandwiches he occasionally made her. Her sofa had previously been Dahmer’s, and for a while serial-killer cultists would pay her as much as $50 to come sit on it. A few years later, after the apartment building had been demolished, Bass was in prison for a drug offense when she heard that Dahmer was dead. Other inmates cheered; she went to her cell and cried.

“The Jeffrey Dahmer Files” opens this week at the IFC Center in New York, and opens Feb. 22 at the Downtown Independent in Los Angeles, with more cities to follow. It is also available on-demand from cable, satellite and online providers.