Pulpy, sweet-natured and funny, "Beautiful Creatures" adds a touch of camp to the supernatural teen romance 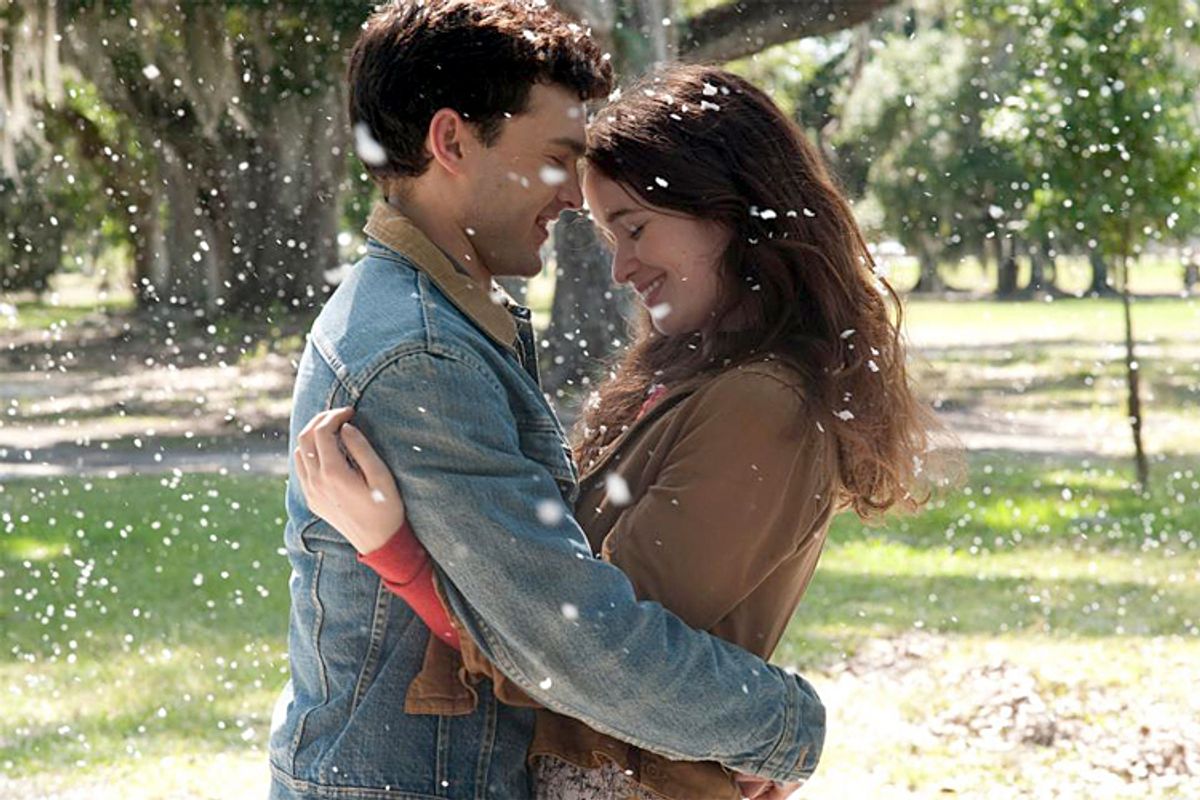 I greatly enjoyed the camped-up teen angst of “Beautiful Creatures,” but I also suspect it might be analogous to those children’s books that are not so secretly meant for grown-ups. (My kids, for example, find the irony of the Lemony Snicket books impenetrable, and the adventures overly dark.) Adapted by writer-director Richard LaGravenese from a young-adult bestseller by Kami Garcia and Margaret Stohl, “Beautiful Creatures” plays like a funnier, edgier, Southern-gothic knockoff of the “Twilight” universe, with a distinct liberal-secular sensibility and without the virginal sexuality, po-faced seriousness or undertones of Christianity.

Precisely those factors – along with the fact that the movie’s real stars are Jeremy Irons and Emma Thompson, in scenery-chewing supporting roles – may well reduce its appeal to teenage girls, who presumably crave the ultra-earnest romantic intensity of the Twi-verse. I’d love to be proven wrong on that forecast, but for now I’ll just insist that “Beautiful Creatures” is surprisingly fun, and deserves much more of a look from adult viewers than it’s likely to get. LaGravenese, a Hollywood veteran with a wobbly but intriguing résumé that goes clear back to his Oscar-nominated screenplay for “The Fisher King” in 1991, has wrestled considerable humor, emotion and atmosphere from this pulpy and derivative material.

While the youthful leads in “Beautiful Creatures” may not have global Stewart-Pattinson appeal just yet, they make an appealing duo with interesting chemistry. LaGravenese understands that in this sort of romance it helps to play with gender roles just a little, under the surface. Alden Ehrenreich, who plays sensitive small-town jock Ethan Wate, has just a little feminine prettiness about him, while Alice Englert (in real life, the daughter of New Zealand Oscar-winning director Jane Campion!), who plays sarcastic teenage witch Lena Duchannes, is a bit tomboyish and spiky-looking. When the worldly-wise and faintly Goth Lena shows up in Ethan’s South Carolina hick town with her Charles Bukowski books, the jocks and sorority types instantly shun her. Ethan owns a pair of glasses, has read Kerouac or whatever and no longer believes in hell as a literal destination for all liberals and homosexuals, so he sees Lena as a challenge. (I know, the theory that anyone Lena’s age still reads Bukowski seems more outrageous than any of the supernatural stuff.)

There’s a general air of high-spirited small-town farce about “Beautiful Creatures,” which may undercut the fervid romance a little but is highly entertaining. It turns out that the idiotic, right-wing bigots in Ethan’s town have a point: Lena lives just outside town with her dad, Macon Ravenwood (Irons), in a house that looks like a crumbling plantation manse on the outside, and on the inside like an insta-vulgar South Beach estate designed for the gay wedding of Jay-Z and A-Rod. With his stretched-out, faux-Southern vowels coated in sorghum syrup and his skin like designer crocodile leather, Irons seems to be channeling Katharine Hepburn playing Truman Capote, or perhaps all of Tennessee Williams’ characters at the same time.

Lena and Macon, as things turn out, belong to the ancient race of “casters,” known to the unenlightened as witches, who are supposed to limit their entanglements with ordinary mortals, romantic or otherwise. This partly has to do with the upcoming drama around Lena’s 16th birthday, when she will either be claimed by the force of light or the force of darkness, which as usual seems a lot sexier. Her trampy but hot older sister Ridley (Emmy Rossum), for instance, who comes to town clad in a gawk-inducing dress and a gawk-inducing convertible and instantly locks lips with Ethan’s best friend, Link (Thomas Mann). She’s all evil and stuff. Then there’s the question of Lena’s long-missing and supremely evil mom, Sarafine, who may or may not have something to do with the town’s Bible-thumping but suspiciously well-dressed busybody, Mrs. Lincoln (Emma Thompson, stealing every one of her scenes).

There’s been some publicity around the fact that Viola Davis would only do this movie if her character were changed from a domestic servant into something else. So she plays Amma, the town librarian, who also has access to troves of secret caster-oriented lore, but still feels as if she were written in to add a smidgen of diversity to what is otherwise a distressingly all-white Southern world where the annual Civil War reenactment has no sense of morality or history. (Yes, it resembles parts of the real-world South in that respect, but let’s not get distracted.)

I actually found the unstable electric connection between Lena and Ethan alluring, though as stated I’m not promising that the movie’s target audience will feel the same way. “Beautiful Creatures” has no explicit sex or nudity, but it’s pretty clear these two aren’t saving themselves till marriage, “Twilight”-style, although Lena’s hormonal tides seem to bring torrential rainstorms, lightning, snow and other hazardous phenomena with them. Furthermore, the bittersweet conclusion to their story is mildly surprising and oddly affecting, although of course it leaves the door open for multiple sequels. All in all, this movie is likelier to be a pop-culture footnote than the cornerstone to a new empire, but if you’re brave enough to check it out – whether this weekend or in a few months on pay-per-view – you may well echo Emma Thompson in exclaiming, “Well, slap my ass and call me Sally!”