"A Good Day to Die Hard": Bruce Willis smirks the Russians to death

After Arnold and Sly's recent flops, Bruce is back with the latest idiotic but action-packed "Die Hard" sequel 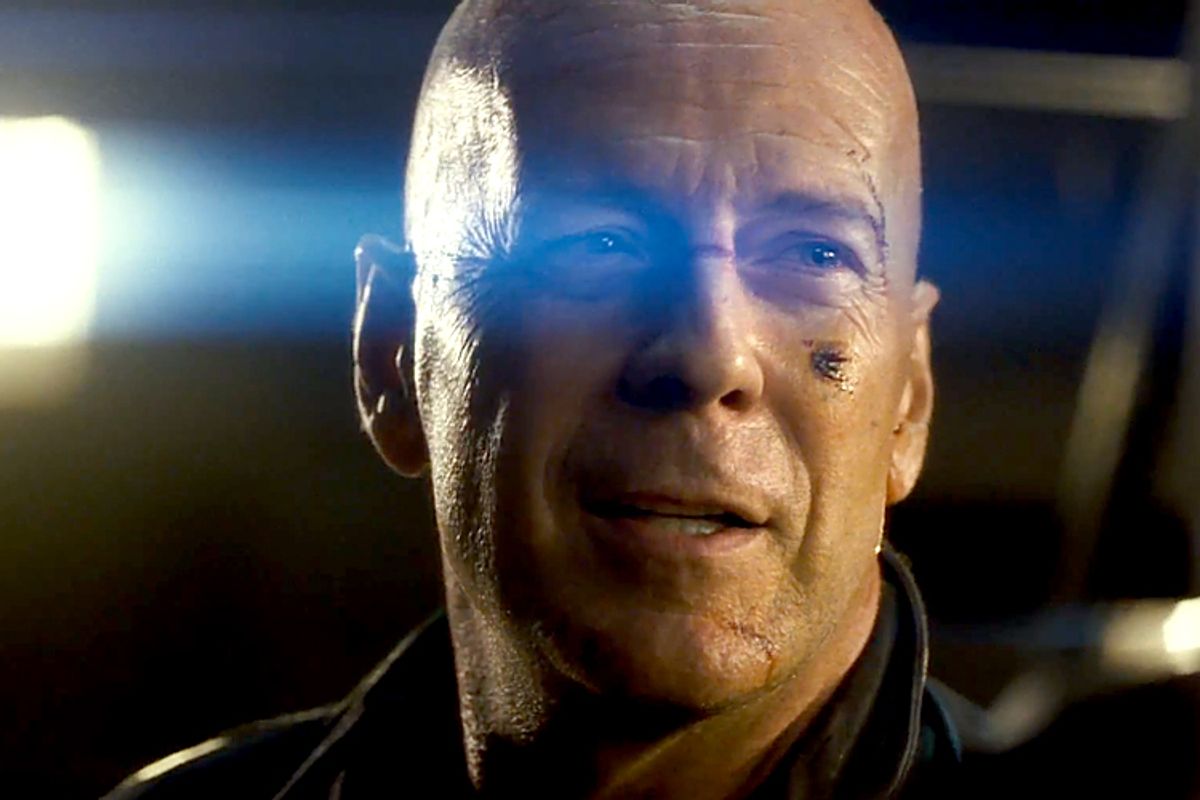 So Arnold Schwarzenegger, Sylvester Stallone and Bruce Willis – with 188 years of life on the planet between them — have all released new action-adventure movies within the last month (pairing themselves conspicuously with younger co-stars), and God help me, I sat through all three. Willis is the baby of the trio at 57, and it’s reasonable to expect that the bewildering and idiotic “A Good Day to Die Hard,” the latest installment of a franchise that has yet to fail at the box office, will prosper where “The Last Stand” and “Bullet to the Head” have bombed. It’s also the worst of the three films, by far, at least if you’re sticking somewhere in the vicinity of old-fashioned ideas about the coherence of plot, characterization and setting, but I recognize that's irrelevant. (For the record, Stallone’s “Bullet to the Head,” while totally cartoonish, is more fun and better made than the other two.)

“Die Harderer” or “Die Hella Hard” or “Faster, Pussycat! Die Hard!” or whatever it’s called features a killer motor-vehicle chase on the congested highways of Moscow and a dude getting chopped into pulp by helicopter blades. At Chernobyl. Oh, and a fair number of close-ups of Willis, positioning his jaw just so and delivering that smirk, the one that comes with quotation marks or a trademark symbol. What else do you actually need to know? It’s not like there’s some shark that can be jumped in a “Die Hard” movie, some frontier of crassness or mendacity or assholishness that has not previously been crossed. There’s no point in acting all outraged about the fact that the fourth sequel to a 1988 action hit is pretty much three well-staged action sequences strung together with the dumbest imaginable connective tissue.

Still, I can’t help observing that the aggressive stupidity of this movie is impressive. It’s not just that it’s an ugly fantasy of masculine dominance aimed at 11-year-old boys – or, more precisely, at adult men who wish to cling to the 11-year-old joy with which they first encountered this kind of movie – it’s also a fantasy that rests on the idea that you’re better off not knowing anything about the outside world because there’s nothing to know. Willis’ character, John McClane, who is still supposedly a New York cop, goes to Russia in search of his bad-seed son, Jack (the impressively muscled Jai Courtney, of TV’s “Spartacus: War of the Damned”), who turns out to be a CIA agent who is trying to spirit some evil rich dude out of the clutches of some Moscow government minister dude who is even more evil. We can tell that about the second dude because every time we see him he’s walking at normal speed and talking in Russian on his phone and then, whoosh! he slows into super slo-mo, with ominous music playing. Evil!

But Jack is a really terrible CIA agent, because he has no idea that everybody in Russia is double-crossing everybody else, in a dastardly scheme that makes no sense at all but results in a high-speed, wrong-way highway chase, the total destruction of a Moscow luxury hotel – who’s going to pay for all that, Mr. Big Evil Gangster? You and your slow-motion-walking, Kalashnikov-sporting friends? – and the aforementioned helicopter battle amid the Chernobyl glow-zone (actually shot using a loaner chopper from the Belarus military, which is kind of sad). Here’s Jack’s explanation to John of all the bad things the bad guy will do: “I’m talking terrorism, WMDs, nukes – all that stuff.” Well, maybe he wanted to spare his dad all the nuances of the CIA briefing room, since there’s a sparkling gag about how John doesn’t know the difference between Chernobyl and Grenoble (which has cute girls in ski outfits and is in the French Alps). Then again, it takes a dose of John’s tough love and Noo Yawk street smarts to convince Jack that the only way to deal with these perfidious Russkies is to kill ‘em all and let the nonexistent Commie God sort ‘em out later.

I take it they’re not expecting big box office in the former Soviet Union for this picture. (The Chinese may dig it, though.) The only female characters in this movie are alternately bitchy or mousy bit parts, and for that matter there’s almost no dialogue in Skip Woods’ screenplay, and what there is of it should’ve been cut out. There’s a scene when Jack and John finally confess their love for each other that would have seemed too embarrassing for a 1998 beer commercial.

As for Irish-born director John Moore, he of “Max Payne” and “Flight of the Phoenix” and the 2006 remake of “The Omen,” he stages all the scenes in which Willis’ stunt double has to jump through a window with aplomb, and that happens about six times. Someone has to direct this kind of grade-C, bargain-basement, Hungarian-shot sequel, if only to raise enough cash to send Willis back to his third-act career doing mildly self-mocking roles in smaller movies. “A Good Day to Die Hard” ends with the recent, and somewhat non-terrible, Rolling Stones single “Doom & Gloom,” which is a reasonable point of comparison. Like Mick and Keith, Willis plans to keep on delivering his limited shtick until he drops dead or the world comes to an end, and we all know which of those things is likely to come first.