It wasn't fun on the Triumph. But its workers, usually not protected by U.S. labor law, deserve our sympathy 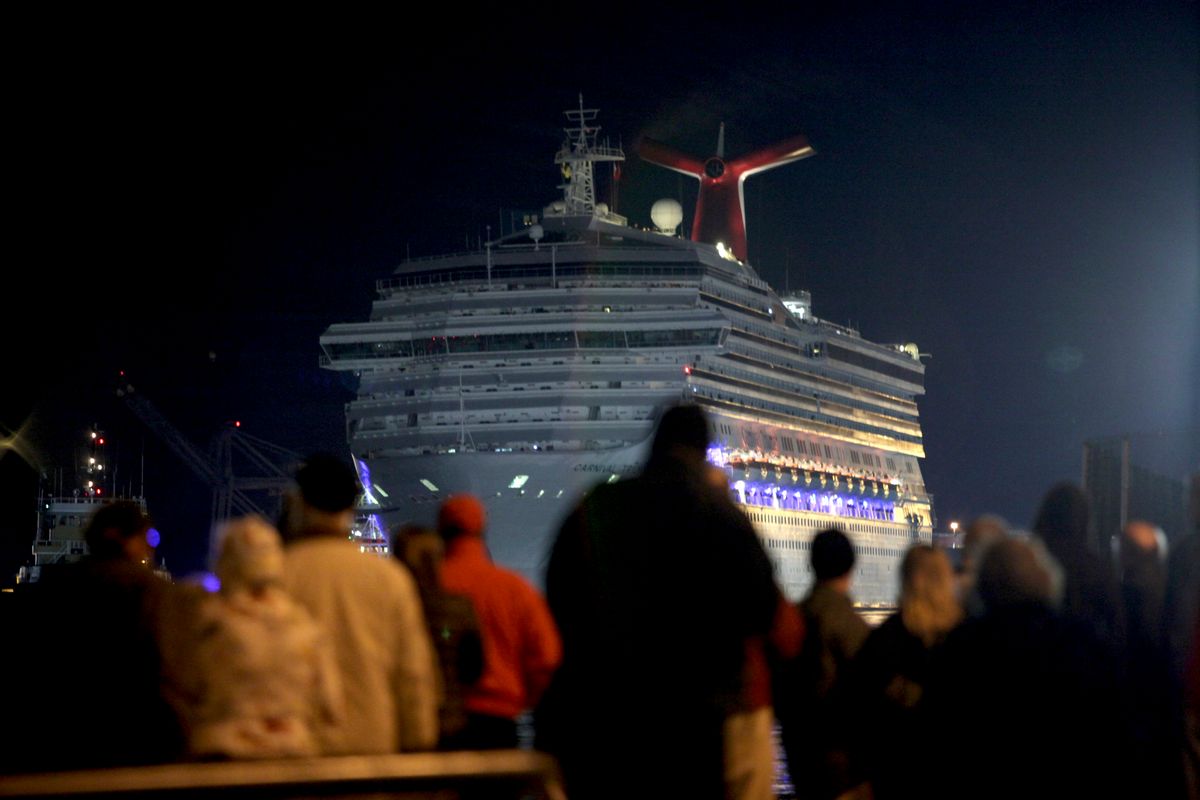 The Carnival Triumph cruise ship is towed toward the dock as spectators watch at the port of Mobile, Ala. (Reuters)
--

The passengers escaped the ship late Thursday, five days after an engine fire disabled the vessel. But, amid the scenes of bathrobe-clad passengers kissing American soil, there’s been comparatively little attention to the crew that was stuck with them -- and kept on serving them. Though they likely suffered most, the cruise workers’ misery lacks the allure of irony: They’re not accustomed to vacationing in luxury. Indeed, thanks to the efforts of Carnival and company, they can’t even count on the basic labor standards available under U.S. law.

“For the workers, it had to be doubly horrible compared to the passengers,” said Ross Klein, the author of "Paradise Lost at Sea: Rethinking Cruise Vacations." Klein, a sociologist and cruise expert at Newfoundland’s Memorial University, noted that workers are stuck dealing with passengers’ “human mess” as well as their “frayed nerves and the short tempers.” Despite the stench of human waste, some workers may not have had the freedom, or the opportunity, to go above deck.

In addition, Klein told Salon, “my guess is on this cruise there were no gratuities, so they ended up working for free.” When Carnival announced that each passenger would receive $500 on top of a refund, said Klein, “I didn’t hear them saying they’re giving $500 to each crew member for their valiant efforts … In what appeared to be deplorable conditions, the workers had to keep on doing their work, and [they were] very likely being subjected to conditions that were a threat to their health, [and] also probably working considerably more than their mandatory 11-hour workday.”

Carnival did not respond to a noon request for comment.

As that 11-hour workday suggests, cruise labor is no picnic to begin with. According to Klein, workers often share small rooms with no windows. They’re restricted from entering passenger areas, and some only rarely get to see daylight. Sexual assault rates outpace those on U.S. shores. While some companies, including Carnival, give customers bills that include an optional suggested tip, “if one worker has a number of passengers decreasing tips, they’re going to be punished for that.” Klein added that tips sometimes end up in management’s pockets rather than workers’.

The international law governing cruise workers allows them to be worked up to 77 hours a week for as little as $600 a month. As Klein notes, that comes to less than $2 an hour. But in reality, he said, “a worker who’s slated as supposedly working 11 hours is very likely working 13 or 14,” and may go “10 or 12 months without a day off.”

Isn’t that illegal? Sort of. Because Carnival and other top cruise lines operating in the U.S. fly the flags of other countries, they aren’t bound by most American labor laws (there are exceptions, including workplace injury cases). And while international convention sets bare minimums like the $600 per month wage, Klein says, “the enforcement of them depends on the country that regulates the ship.” Klein added that Carnival, the industry leader, is also “the leader in knowing how to keep your costs of worker treatment to a minimum.”

Here’s how: Carnival is technically registered in Panama, a country whose laws Klein charges “have been changed to satisfy Carnival’s needs and interests. Because Carnival means a fair amount of money to their national treasury.” Effectively, for cruise workers, says Klein, “there aren’t any real labor regulations.” (He noted that one lawsuit that was brought against Carnival in the U.S. ended with a settlement requiring future such disputes be pursued through an arbitration system, effectively requiring potential worker plaintiffs to shell out tens of thousands of dollars in transportation and legal fees.)

Association with Panama has paid other dividends for Carnival as well: In 2011, the New York Times’ David Leonhardt reported that, while Carnival depends on assistance from U.S. agencies like the Coast Guard, over a five-year period, its total corporate tax payments equaled just 1.1 percent of its $11.3 billion in profit. “So Carnival trades on the New York Stock Exchange, its corporate offices are in Miami -- but it pays no taxes because it’s a Panamanian corporation,” said Klein. “It’s a great deal.”

Since the 1980s, there have been unsuccessful efforts in the U.S. Congress to force improvements in the labor standards of companies like Carnival. Klein says neither party has shown sufficient willingness to defy the industry, given “the money they spend on lobbying and the money they spend on indirect benefits to members of Congress.” Like cruises.

Carnival's workers have shown more courage. As The Guardian reported, in 2010 about 150 Indian workers held an hour-long predinner demonstration in protest of low wages and tips. Following the end of that cruise, they received letters from Carnival UK’s chief financial officer pledging to increase basic pay. But the workers who protested wouldn’t reap the benefit -- the same letter informed them that they would not be brought back for future cruises because their “industrial action” is “not something Carnival UK is prepared to tolerate.” British labor law did not apply.

Meanwhile, the Seamen’s Church Institute, an affiliate of the Episcopal Church, charges that the cruise industry is increasing the risk of future emergencies by lobbying to narrow the definition of “seafarers,” a category of workers with certain rights and responsibilities (including health care and training) under international convention.

Douglas Stevenson, who directs the institute’s Center for Seafarer’s Rights, told Salon that such a move that excluded “hotel staff or hairdressers” from the category would allow management to cut corners on training them. “If you have a perception that they’re not seafarers, and you don’t treat them as seafarers ...” he said, “I think that does increase the safety risk.”