Dermot Mulroney: "I forced myself on Mike White and wound up with a part"

With a spate of guest roles on "New Girl," "Enlightened," and "SNL," the actor reveals his "big fat joke" side 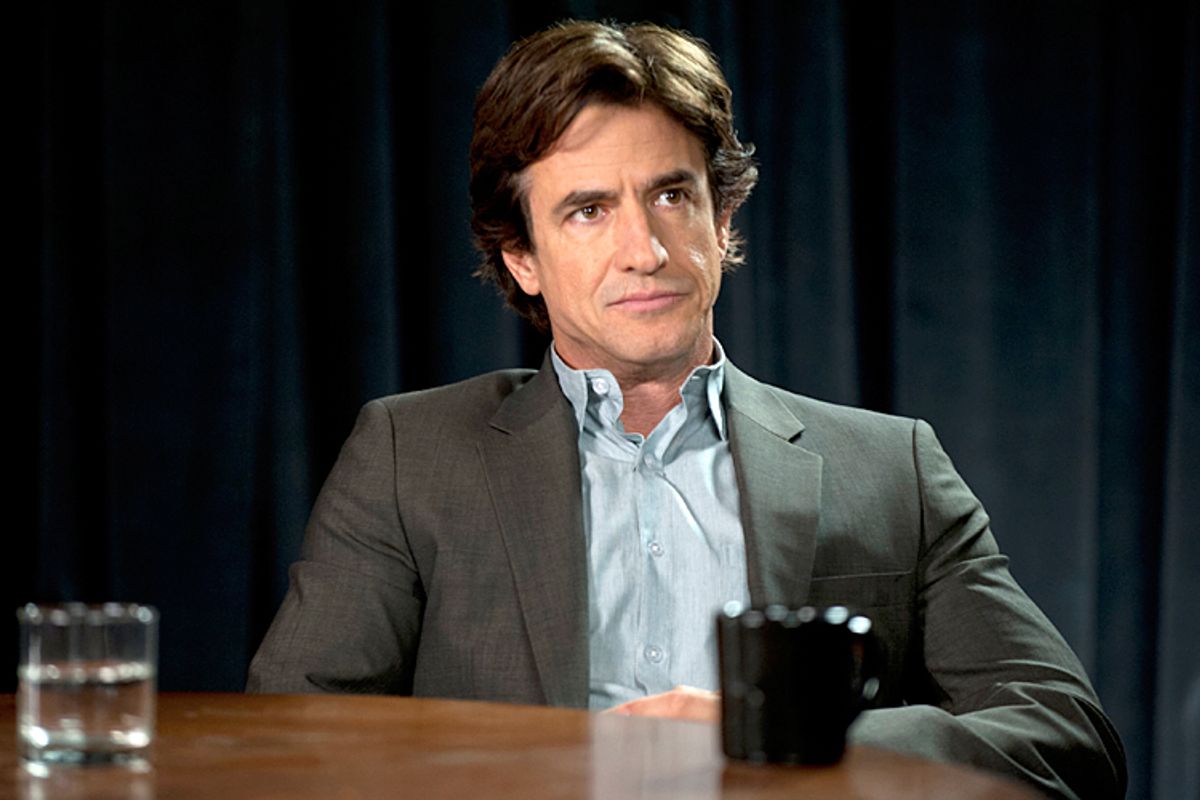 This season on the fantastic, unique "Enlightened," Dermot Mulroney has been guest-starring as Jeff, a respected investigative journalist who Amy Jellicoe (Laura Dern) thinks is the perfect person to help her expose the corporate misdeeds of Abaddon, the company she works for. Amy, being Amy, approaches Jeff full of energy and cockamamie ideals, but instead of being rebuffed, he takes her seriously. Together, they are going to try and take Abaddon down. Mulroney has been on TV quite a bit lately. He was a guest star on "New Girl" last season and just had a cameo appearance in a "Saturday Night Live" sketch. Later this year, he will co-star in the much-awaited film adaptation of Tracy Letts' award-winning play "August: Osage County" alongside Meryl Streep, Ewan McGregor and Julia Roberts. He spoke with me about "Enlightened's" particular brand of humor, and the long history of being mistaken for Dylan McDermott.

How did you land a role on “Enlightened”?

I don’t know. I just recently got to know [creator] Mike White, so that potentially had something to do with it. I’ve known Laura for years, but not that well. This is really what happened: I watched the whole first season because of, well, because of Laura and because of Mike. That was a good combination for me, of names. Plus there was a great poster on the streets in L.A. where her mascara is running down her face and she just looks like a maniac. I don’t watch that many series, but this one I started from the first episode. So I was already a fan, and then I met Mike. In fact, I kind of forced myself on him and wound up with a part. I don’t know if it’s directly related, but it worked out.

When you were watching or making the show, did you find Amy hard to watch? She can be her own worst enemy.

Mike directed me toward accepting her. I don’t think it would help the story if I’m rolling my eyes throughout, if I’m looking at myself and saying, “Who’s this crazy bird?” Watching it was just like watching a trainwreck: I could not turn my eyes away from that series, last season. I could not not watch. I was fascinated. But I also could just sense an actor in the highest form with Laura, in this part. For whatever reason, the way this part works with her at this time, it’s an actor really resonating in a role. So I had to watch that. It was one of those times when an actor really knows what the hell she’s doing. So I was glad to see it and thrilled to be involved.

I talked to Laura Dern earlier this season, and she spoke about how Amy is such a cheerleader; she's so good for Jeff’s ego.

It’s true, and Jeff certainly will take as much of that as he can get. He’s certainly very pleased with himself in many ways -- more than happy to point out to you just how many Twitter followers he has. He’s deeply self-obsessed. If he can casually drop in something he’s done somewhere in the world, he will: He graduated from Princeton, he ran the rapids in the grand Grand Canyon, he lives somewhere in one of the Hamptons. He’s kind of a name-dropper. But different than the sort in Hollywood. This is like an intelligentsia name-dropper, an art-world guy.

But at the same time, he's also a crusader. He's earnest and driven about his work.

Oh, yeah, Jeff’s genuine, for sure. That’s what proves irresistible for Amy. Earnest is a great word, too. It’s so weird that such irony comes out of such genuineness in this show. That’s part of Mike’s brilliance, really. It's an advanced course in television comedy, like the senior-level class. You have to have taken an earlier course to get this one.

Do you think the show is funny? I don’t think it’s not funny, but that’s so not what it’s about to me

I agree. The point of view of this show is just really smart, is the difference. That’s what it is. It’s a really smart show.

There was a recent episode where Amy has this epiphany that the Internet is connecting people. How do you feel about technology?

I don’t know. I give it an "eh." I don’t like having to upgrade and then suddenly learning that there is all this other stuff that I didn’t know I needed. If it came to a halt and I didn’t have to go up the next level, I’d be fine. But all of this upgrading is starting to grind on me. For me, it’s like I was fine with the toaster oven, and then they come in with this microwave.

You’ve done a bunch of comedic TV roles lately, such as on "New Girl" and "Saturday Night Live."

How did that "SNL" sketch "Dylan McDermott or Dermot Mulroney" come about?

I don’t know how that came about! It came about! They called me up on Thursday, and I was standing on that stage Saturday afternoon. They asked me and Dylan to do this thing. I said yes. I didn’t think about the repercussions or anything like that, but from what I understand, it took on a life of its own, somehow. What happened is that the writers of that particular sketch are young, and it hadn’t occurred to them that this coincidence, or whatever it is, has been around. But I’m not as young, so I knew about this all along. So did Dylan. And they were experiencing it as if they came up with it. [Adopts funny voice] “Kids think it’s funny too!”

And you knew about it because people have come up to you for a long time asking if you’re Dylan McDermott?

It’s just been a part of what I’ve gone through, yes, from the very beginning, really. And I support it like never before. I’m on board.

Had you ever been on “Saturday Night Live” before?

Oh, no, not at all. I’ve maybe been backstage once with a friend, but this was a super-elevating experience, to walk onstage with a live audience. It was really, really fun and very challenging, and the respect I have for the guys who’ve done that, it’s really amazing to me. It’s like going to a NASCAR event and then looking in the pit of a NASCAR race. It’s a synchronized event in that same way, where they’re sort of going by you in laps and different lengths and different comedy regalia.